G7 summit in Biarritz winds down after three days of talks

Iran, trade and the Amazonian wildfires have dominated discussions at the summit of the group of advanced industrialized economies. Here are the key developments from the final day of the G7 meeting in Biarritz. 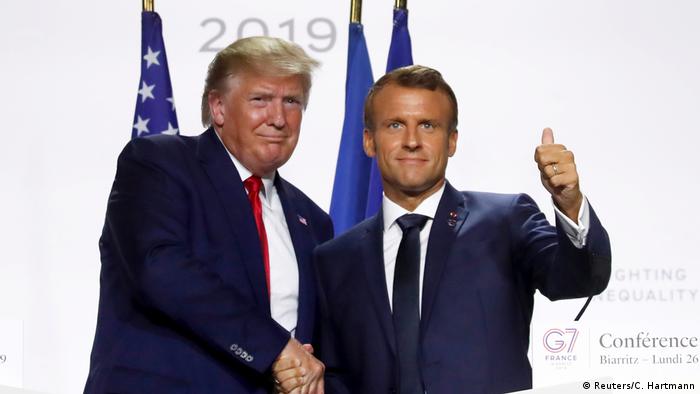 After three days of talks in Biarritz, the leaders of the US, France, Germany, Japan, the UK, Italy and Canada have narrowed some of their differences. The Group of Seven'sthree days of talks were dominated by the Iran nuclear crisis, trade, and fires in the Amazonian rainforest.

French President Emmanuel Macron and American President Donald Trump praised the common ground found by G7 leaders at their summit. "We have managed to find real points of convergence, unprecedented, very positive, that will allow us to go forward in a very useful way," Macron said in a press conference alongside Trump.

Trump indicated that there could be a thaw in trade-war tensions between China and the US, as he declared that delegations would "very shortly" resume talks, with Beijing's top negotiator calling for "calm."

The US president opened the summit with guns blazing regarding the trade war with China, having announced new tariffs on Beijing late last weekand commanding US companies based there to exit.

From Sunday to Monday, Trump changed his tune. The president said Beijing had initiated two phone calls and that talks included Chinese Vice Premier Liu He, the key trade negotiator.

"I don't think they have a choice," Trump said, warning that China could risk greater economic challenges if no solution was found.

Japan's leader Shinzo Abe said that stable relations between the US and China were "very important" not just for their own economies but also for the global economy. "I hope there will be good results from US-China trade negotiations that will help stabilize the global economy," Abe told a news conference after the summit.

Read more: Opinion: The world has reached a crossroads in trade policy

Iranian Foreign Minister Mohammed Javad Zarif held surprise sideline talks with France's Emmanuel Macron. His hourslong visit came as Macron ramped up attempts to salvage the 2015 nuclear deal with Tehran the US has abandoned. The French president said the talks offered a "roadmap" to ending the US-Iran nuclear impasse.

Trump said a meeting between himself and his Iranian counterpart Hassan Rouhani in a matter of weeks was realistic, after a series of diplomatic maneuvers by France.

"I have a good feeling. They have to be good players, if you understand what I mean," Trump told reporters at a news conference. "They can’t do what they were saying they were going to do, because if they do that, they will be met with really very violent force. So I think they are going to be good."

Merkel praised the efforts of the G7 leaders to find a diplomatic solution to differences over Iran's nuclear program. "What unites us, and that is a big step forward, is that we not only don't want Iran to have nuclear weapons, but also that we [want to] find the solution to that via political means," she said.

French President Macron: "There are two very clear things that matter to us"

The group of leaders agreed to put €20 million ($22.22 million) toward combating the fires in the Amazon on Monday, mainly to send firefighting aircraft to take on the massive blazes that engulf much of the world's largest rainforest.

France's Macron added that the G7 would write up an initiative for the Amazon that will be launched at next month's UN General Assembly in New York.

Canadian Prime Minister Justin Trudeau has said the country will send water bombers to Brazil to help fight wildfires in the Amazon, and will also contribute €10 million ($11.3 million) in aid.

"One of the things we have seen over the past years as Canada has faced increasingly extreme wildfire events is there is a global network of support and friends that lean on each other," Trudeau said in televised remarks.

Macron last week accused Bolsonaro of lying about his environmental commitments, and the Brazilian president struck back, accusing Western countries of interfering in his country's affairs before mocking the looks of Macron's wife, Brigitte Macron, on Facebook.

Meanwhile, Trump dismissed plans to reduce fossil-fuel production in a press conference following the summit, saying he's "not going to lose" America’s wealth "on dreams" and "windmills," before adding that he was an environmentalist himself and wanted to have the cleanest air and water on Earth.

Trump is a climate change skeptic who once claimed that the idea of the world becoming warmer due to human activity was a hoax invented by the Chinese.

Earlier on Monday, Trump skipped the G7 session on climate, biodiversity and oceans, sending his aides in his stead.

Read more: Opinion: Action, not outcry, will save the Amazon

After this weekend's talks, British Prime Minister Boris Johnson expressed cautious optimism regarding the prospect of clinching a deal for Britain's exit from the European Union.

"I am marginally more optimistic," he said afterinvolved contacts on Brexit with fellow leaders at the summit, but admitted: "It will be difficult ... there is a substantial disagreement" between Britain and the EU."

Johnson also said he was prepared for Brexit talks to go down to the wire before the October 31 exit deadline and potentially make the decision to leave without a deal on that day.

"Clearly for us, the walking away as it were, would come on October 31 when we would take steps to come out on the terms for which we will have by then made absolutely colossal and extensive and fantastic preparations," he said.

On Monday Trump asserted that he was inclined to invite Russia to next year's summit, which will be held in the United States.

Trump said it's better to have Russia "in the tent" rather than "outside the tent" of the group of advanced industrialized economies, and that some G7 countries shared his desire to invite Russia back while others were opposed. Without naming names, Trump noted that Germany bought energy from Russia at the same time as the US helped defend Europe from aggression from Moscow.

European Union officials have said that Russia isn't welcome because it doesn't comply with democratic principles.

Russia was booted from the Group of Seven after it annexed Crimea in 2014.