US President Donald Trump praised Boris Johnson as the "right man" to deliver Brexit, while meeting the UK prime minister in France. Trump also pledged a trade deal with the UK, despite opposition in the US Congress. 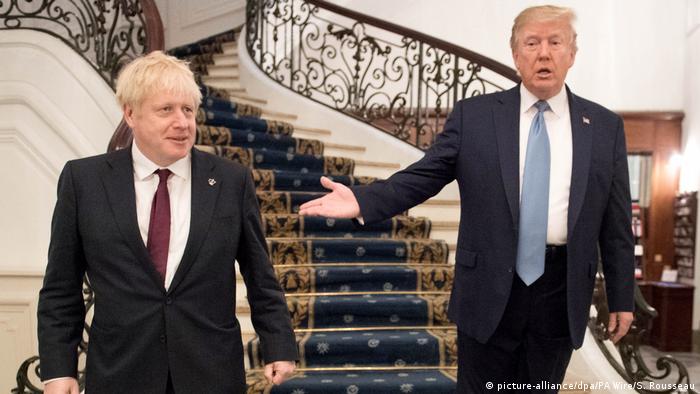 The leaders of the UK and the US had their first official meeting on the sidelines of the G7 summit in France on Sunday, with President Donald Trump heaping praise on Prime Minister Boris Johnson and promising stronger trade ties once the UK leaves the EU.

Trump vowed to work out a "very big trade deal, bigger than we've ever had" between the two countries. The US president also said the British would lose "the anchor around their ankle" after Brexit.

Johnson responded by saying he was "very grateful" for Trump's promise.

"And we're looking forward to having some pretty comprehensive talks about how to take forward the relationship in all sorts of ways, particularly on trade," he added.

US Democrats pump the brakes

However, a trade deal between the US and the UK would need support from the US Congress. Both the speaker of the House of Representatives, Nancy Pelosi, and the ranking Democrat in the Senate, Chuck Schumer, said they would oppose any deal that undermined the Northern Ireland peace accord.

"Whatever form it takes, Brexit cannot be allowed to imperil the Good Friday agreement, including the seamless border between the Irish Republic and Northern Ireland," Pelosi said earlier this month.

On Monday, Schumer slammed the White House for "over-promising an unconditional and unrealistic" trade deal and said the US should not be "handing out a blank cheque that bankrupts the peace, security, self-determination and shared prosperity" in Northern Ireland.

'Right man for the job'

Sunday's meeting between Trump and Johnson is likely to bolster the prime minister's position in the UK ahead of the designated Brexit date in October.

Trump had repeatedly told the media about advice he had given to Johnson's predecessor Theresa May on handling Brexit. Talking to reporters on Sunday, however, he said that Johnson "needs no advice."

"He is the right man for the job," Trump said.

"This is a person that's going to be a great prime minister, in my opinion," he added.

Boris, who often interjected while Trump was talking to the press, responded with a laugh.

"I am not going to discourage you," he said.