Donald Trump played up "America's environmental leadership" ahead of the 2020 US presidential election. At the same time, he denounced the "unfair, ineffective and very, very expensive" Paris climate accord. 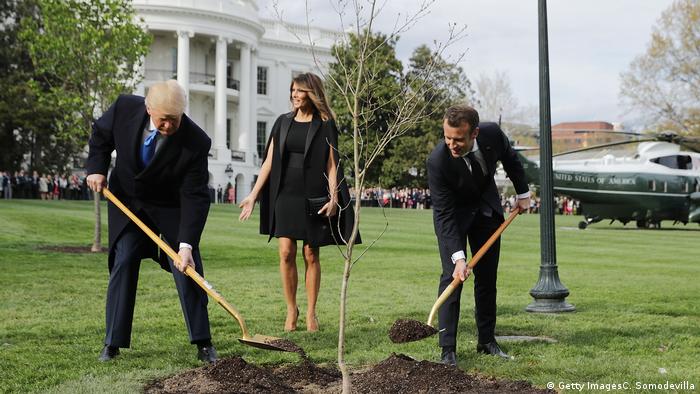 Despite having launched some of the most sweeping rollbacks in air, water and other protections in decades, Donald Trump declared himself a champion of the environment on Monday.

"We want the cleanest air. We want crystal clean water. And that's what we're doing," Trump said during a speech at the White House. "We have only one America. We have only one planet," he added.

Cabinet members applauded and lauded Trump. One invitee, Florida bait and tackle shop owner Bruce Hrobak, praised what he considered the administration's efforts against water-fouling algae before pumping his fist in the air and declaring: "Trump 2020."

Trump's speech came after rainfall around Washington broke seasonal records, raised creeks up to 11 feet (3.3 meters) and flooded the White House basement. The US president, who has called climate change a Chinese hoax, dismissed a report last year by his own government warning of massive economic losses should carbon emissions continue to feed climate change unchecked.

Denouncing "a relentless war on American energy" under his predecessor, Barack Obama, Trump forcefully rejected "radical plans" in the struggle against climate change, which, he said, "would not make the world cleaner." He added that "we will defend the environment, but we will also defend American sovereignty, American prosperity — and we will defend American jobs."

Trump has expanded a boom in domestic gas and oil, mocked climate science, neutered the Environmental Protection Agency, propped up coal, and eased Clean Water Act protections. In 2017, he withdrew the US from the 2015 Paris climate agreement, which aims to limit global warming to below 2 degrees Celsius (3.6 degrees Fahrenheit) above preindustrial levels.

Former Vice President Al Gore, a co-winner of the 2007 Nobel Peace Prize for his climate activism, tweeted that Trump "is refusing to see reality." He wrote: "American voters aren't fooled by the President's attempts to cover up his failed environmental record."

In October, a UN report warned that time to slow climate change could run out and that preventing catastrophic climate change would require an unprecedented transformation of the global economy.

Donald Trump has lashed out at Theresa May after the leak of diplomatic memos criticizing his presidency. The UK has been scrambling to stem the damage caused by the release of confidential telegrams over the weekend. (09.07.2019)

The hedge fund manager has been accused of sexual acts with underage women. He was arrested over the weekend but has denied all charges. (09.07.2019)