Donald Trump has lashed out at Theresa May after the leak of diplomatic memos criticizing his presidency. The UK scrambled to stem the damage caused by the leaking of confidential memos, but Trump is not letting go. 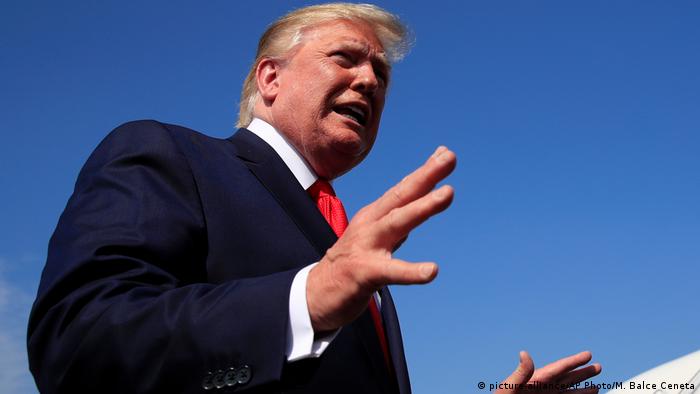 US President Donald Trump on Monday and Tuesday dragged British Prime Minister Theresa May into his Twitter rants about the leaking of a series of memos dating back to 2017, in which UK Ambassador Kim Darroch called the US president's administration "dysfunctional" and "inept."

After the UK government reiterated the prime minister's support for her ambassador, Trump assailed May's handling of Brexit negotiations  and welcomed her impending departure from office.

"What a mess she and her representatives have created," Trump wrote in his tweets. "I do not know the Ambassador, but he is not liked or well thought of within the US. We will no longer deal with him," he added.

Addressing Ambassador Darroch, Trump unleashed a litany of insults, calling the diplomat "the wacky ambassador," "a very stupid guy," and a "pompous fool." Observers say such behavior only underscores the accuracy Darroch's assessment that the president is thin-skinned and vindictive.

The publication of the diplomatic cables in the UK's Mail on Sunday came a month after Trump enjoyed a state visit to Britain that included a 41-gun salute welcome at Buckingham Palace and a banquet dinner with the English monarch, Queen Elizabeth II.

Trump wrote that "while I thoroughly enjoyed the magnificent State Visit last month, it was the Queen who I was most impressed with!"

The incident threatens to complicate the UK government's efforts to strike a trade agreement with the United States to mitigate potential damage from Britain's withdrawal from the European Union.

"We have made clear to the US how unfortunate this leak is," a UK government spokesperson said on Monday. "At the same time we have also underlined the importance of ambassadors being able to provide honest, unvarnished assessments of the politics in their country."

The spokesperson added that "Sir Kim Darroch continues to have the prime minister's full support."

The Daily Telegraph reported that 100 people in the Foreign Office and other departments might see such memos. Reporters have speculated that Conservative Brexit-backers might have leaked the memos.

Former Foreign Secretary Boris Johnson, a hardcore Brexiteer, has battled current Foreign Minister Jeremy Hunt to succeed May, who will step down this month after three years in power. Hunt said whoever leaked the cables would face "serious consequences."

Whoever replaces May will get to appoint his own US envoy after Darroch's term expires in January.

Missing Dad! Deported from the USA

Missing Dad! Deported from the USA

The diplomat has described the Trump administration as "dysfunctional," "clumsy" and "inept," according to a British Sunday newspaper. Euroskeptic Nigel Farage has called for the ambassador's firing. (07.07.2019)