Brexit: Boris Johnson, Angela Merkel to face off over stalemate | Europe| News and current affairs from around the continent | DW | 20.08.2019

Brexit: Boris Johnson, Angela Merkel to face off over stalemate

Ahead of his meeting with the German chancellor, Boris Johnson has again urged the EU to reopen Brexit negotiations. The silence so far has been deafening. What is Johnson hoping to achieve in Berlin? 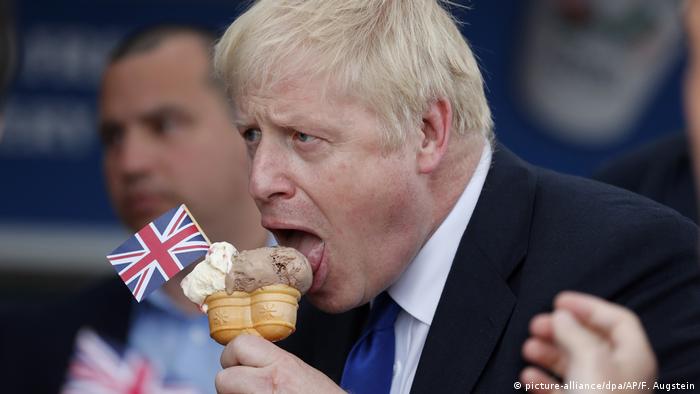 On the one hand, there's Johnson's impulsive, often oafish behavior coupled with populist rhetoric and a tendency to be economical with the truth. On the other, there's Merkel, who epitomizes a methodical and no-nonsense approach to dealing with difficult situations.

Even in the best of times, it would be a stretch of the imagination to picture the two of them finding much common ground. But given the heated and turbulent nature of the discussions on Brexit, a rapprochement looks as distant as ever.

Indeed, barring some last-minute change of heart, the perception is that Johnson's talks with Merkel and French President Emmanuel Macron, whom he's due to meet on Thursday, are unlikely to yield any type of breakthrough.

"The cynical interpretation is that this is for a domestic audience, [Johnson] saying that he's trying one last time. The EU is going to say no, the withdrawal agreement needs to stay. And then he can come back with that kind of extra legitimacy," says Dr. Charlotte Galpin, a lecturer in German and European Politics at the University of Birmingham.

The UK prime minister is essentially playing the blame game and will tell Merkel and Macron that the EU must offer a new deal or accept that the UK will leave the bloc without one. And their answer will likely be as predictable and consistent as it has been all along: We will not reopen the Withdrawal Agreement (WA) between the EU and the UK and we most certainly won't be removing the backstop. 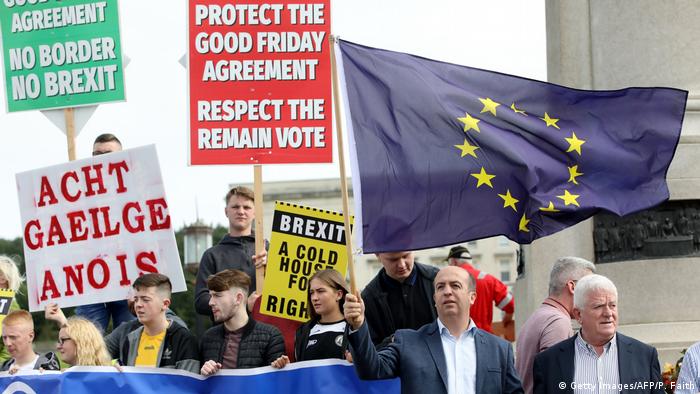 The latter is a key component of the WA which would come into play if no long-term trade deal has been agreed by the end of 2020 that avoids a hard border between Northern Ireland and the Republic of Ireland. It would involve the UK retaining a close relationship with the EU for an indefinite period.

Johnson's riposte has been equally curt: In that case, he says, he would have no qualms about taking the UK out of the EU without a deal on October 31.

The tone between the two, and arguably more so from the British side, has become increasingly belligerent. "[Johnson and his team] are using a lot of military language that constructs the agreement as a kind of war, that we're going into battle and that Britain shouldn't capitulate, that the opponents in the UK are collaborating with the EU. I think these meetings are part of that performance," Galpin told DW.

The German government has, of course, been doing its homework for a no-deal scenario. A recent internal finance ministry document indicates a "high probability" of a no-deal Brexit on October 31, saying it's "inconceivable" that Johnson will soften his position on the Irish backstop. The paper underlines Berlin's firm opposition to any renegotiation of the withdrawal agreement as demanded by the British prime minister and says it's "crucial" that all EU member states remain united and not "lose their nerve," faced with the prospect of a disorderly Brexit.

Germany has already passed more than 50 laws and other measures to prepare for a no-deal Brexit. These include a recent agreement between BaFin, the German financial watchdog, and its British equivalent the FCA on cross-border financial services. Berlin has also hired 900 more customs officials to deal with an expected backlog of clearance procedures at borders.

The perceived wisdom is that Johnson thinks Germany needs the UK more than the other way around. It's certainly the case that the UK is an important economic partner, no more and no less.

"What is more important to Germany is the single market and trade with the remaining 27 [EU] member states. So there's a limit to what Germany is going to offer. And then there's the other practical thing which is that the Brexit negotiations have since the beginning been delegated to the Commission under Michel Barnier, so Germany on its own does not actually have a lot of control over the Brexit process," says Galpin.

How do Germans think Brexit will pan out?

Johnson's reasoning appears to be that if he can somehow sway Merkel to offer concessions then the rest would follow suit. "The idea is that the German chancellor is much more flexible and apparently open towards taking a more lenient policy or a more flexible approach to the negotiations. Certainly, France seems much more hard-line. So if he can get some concessions from Merkel, you might stand a chance of reopening negotiations. So I think that's the calculation," says Professor Hussein Kassim, a senior fellow at the "UK in a Changing Europe" think tank.

Given the ploys and counter-ploys, the barely veiled threats, and the "ball-is-in-your-court" attitude displayed by the UK so far, it's quite a feat that the EU has stuck to its position. "The EU 27 have actually been remarkably unified on this issue the whole way through. If you think about how divided they are on other issues facing Europe the fact that they've stuck to one consistent line is quite astounding," says Galpin.

Johnson will be hoping, at the very least, that he can sow some seeds of doubt and pander to his supporters at home where the debate is very different, according to Kassim. "There isn't necessarily an appreciation among the British public or the political class or the media about what exactly is going on. So I think that under those circumstances the diplomatic mission might be interpreted at face value. People are not going to be critical or questioning in a way that might be anticipated."