Britain faces a shortfall of everyday essentials if it leaves the European Union without a transition deal, a new leaked report says. Some lawmakers are demanding Parliament be recalled to discuss a no-deal Brexit. 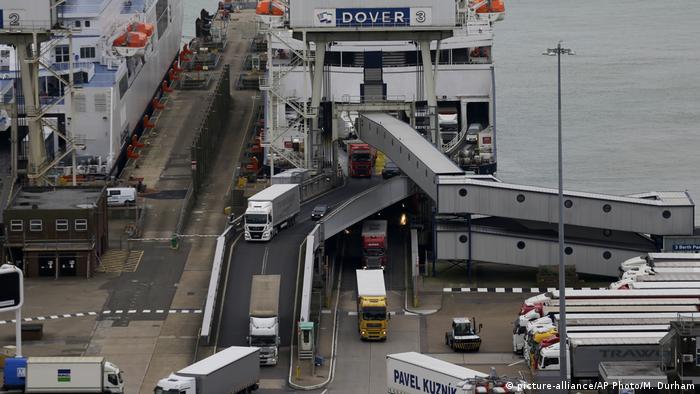 Leaked to The Sunday Times, the forecast warned that 85% of lorries using the main crossings between England and France "may not be ready" for French customs.

The report, codenamed Operation Yellowhammer, said disruption at ports could last for three months, causing a decrease in the fresh food supply. It says this could potentially lead to panic buying.

The fresh warning comes as British Prime Minister Boris Johnson attempts to force Brussels to reopen negotiations on the Brexit deal agreed with his predecessor Theresa May. Johnson has insisted that the UK will leave the EU on October 31 with or without a deal.

The report predicted that border delays would lead to severe traffic disruption especially around the British capital, London, and southeastern England, which could affect the distribution of fuel.

It also warned that a no-deal Brexit would impact the supply of medicines and medical supplies, many of which arrive in the UK from the European mainland.

The report noted that few bilateral deals have been concluded with individual EU member states, except over social security rights, and that public and business readiness for Britain crashing out of the EU "remain at a low level."

Similar dire predictions made by academics and by other British government departments have been dismissed as scaremongering by those who support Brexit.

However, Johnson is under intense pressure from politicians across the political spectrum to prevent a disorderly departure.

'Call MPs back from vacation'

More than 100 lawmakers have urged an immediate recall of Parliament so they can debate a no-deal Brexit. Parliament is currently in its summer recess and is not due to return until September 3.

The minister in charge of coordinating no-deal preparations, Michael Gove, insisted later on Sunday the leaked document was just a "worst-case scenario."

He said on Twitter that very "significant steps have been taken in the last 3 weeks to
accelerate Brexit planning."

Johnson, meanwhile, is due in several European capitals this week on his first overseas trip as prime minister to seek a new Brexit deal and avoid a no-deal departure.

European leaders have repeatedly rejected reopening an accord agreed by May last year but then rejected by British lawmakers on three occasions.

On Sunday, German Chancellor Angela Merkel said that she would meet Johnson on Wednesday, but she noted that Berlin was prepared for a disorderly Brexit.

"We are prepared for any outcome ... even if we do not get an agreement. But at all opportunities, I will make an effort to find solutions — up until the last day of negotiations."

In a further move, Britain announced on Sunday it had ordered the repeal of the European Communities Act, which took Britain into the forerunner to the EU 46 years ago and gives Brussels law supremacy.

The order, signed by Brexit Secretary Steve Barclay on Friday, is set to take effect on October 31.

Could an independent Wales go it alone?

Wales is not too poor to be an independent nation. The ex-first minister of Wales believes so anyway, though others are less sure. So, how would Wales fare economically if it had to go it alone in a post-Brexit world? (09.08.2019)