The Brazilian president has accused Macron, and the other members of the G7, of treating Brazil like "a colony." This came after the leaders at the summit in Biarritz dedicated $20 million to the wildfires in the Amazon. 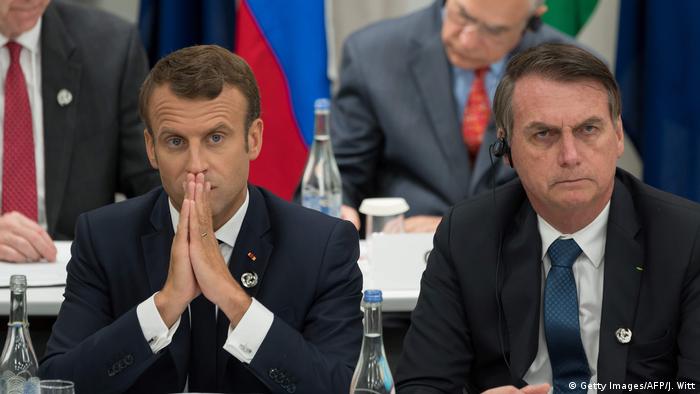 The war of words between Brazilian President Jair Bolsonaro and French President Emmanuel Macron showed no signs of abating on Monday.

Macron announced that the G7 had agreed to offer financial support in fighting the Amazon wildfires, but his comments did not go down well with his Brazilian counterpart.

"We cannot accept that a president, Macron, unleashes unreasonable and gratuitous attacks on the Amazon, nor that he disguises his intentions behind the idea of a G7 'alliance' to 'save' the Amazon, as if we were a colony or a no-man's-land," Bolsonaro tweeted.

Macron said G7 leaders were pledging $20 million (€18 million) toward the cause in the Amazon, and that they would back a broader initiative for the region to be presented at the United Nations General Assembly next month.

Bolsonaro's latest broadside comes on the back of comments the Brazilian president made about his opposite number's wife, Brigitte Macron, on social media, which the French president described as "extraordinarily disrespectful."

In a Facebook post that compared photos of the two leaders' wives with the caption: "Now do you understand why Macron is persecuting Bolsonaro?" Brazil's president wrote: "Don't humiliate the guy. Hahaha."

Macron responded by saying: "I think that the Brazilians, who are great people, are a bit ashamed to see this behavior," before adding, "I hope that they can soon have a president who behaves in an appropriate way."

As a further backdrop to the verbal dispute, the French leader last week accused Bolsonaro of lying about his environmental commitments.

Meanwhile, the Brazilian president's green policies came under greater scrutiny than ever from his own people amid widespread demonstrations.

Furthermore, his approval rating has dropped from 39% in February to 29.4%, according to a poll by CNT/MDA on Monday.

The poll, which also saw Bolsonaro's personal disapproval rating increase to 53.7%, from 28.2%, was conducted between August 22 and August 25.

On Saturday, world leaders gathered in Biarritz, France, for this year's tense G7 summit. The day included the "best meeting" between Donald Trump and Emmanuel Macron. Here are the key developments going into Day Two. (25.08.2019)

World leaders are gathered in Biarritz for the annual G7 summit. Here are the key developments from day two. (26.08.2019)

Macron gets G7 nod to negotiate with Iran

Shortly after G7 leaders asked French President Emmanuel Macron to de-escalate tensions, Iran's foreign minister flew to the summit for surprise talks. Meeting with Trump, however, was out of the question, Tehran said. (25.08.2019)