Macron gets G7 nod to negotiate with Iran

Shortly after G7 leaders asked French President Emmanuel Macron to de-escalate tensions, Iran's foreign minister flew to the summit for surprise talks. Meeting with Trump, however, was out of the question, Tehran said. 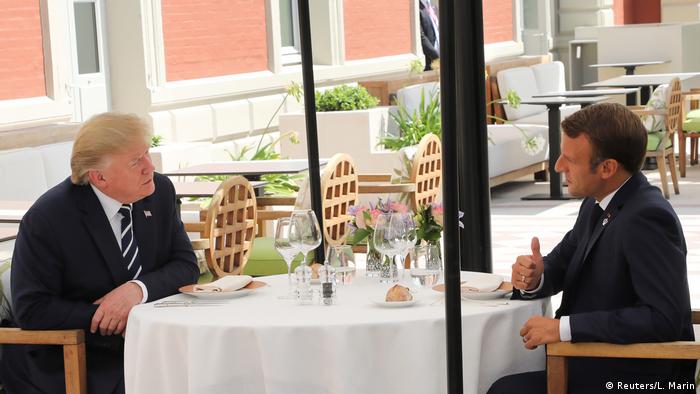 French President Emmanuel Macron, as current president of the G7, will hold talks with Iranian authorities to find a way to save the 2015 nuclear accord, a French presidential source said Sunday.

The leaders of the US, France, Germany, Japan, the UK, Italy and Canada — the world's seven largest, IMF-designated advanced economies — who have gathered in Biarritz, southern France, agreed that Iran must be stopped "at all costs" from getting a nuclear weapon.

"As president of the G7, President Macron did indeed get the power to discuss and send a message to Iranian authorities on the basis of the exchanges we had last night," a French official said, without providing any details.

Zarif later met briefly with Macron on the sidelines of the summit, before departing France once more after some five hours. He spoke in a tweet of what he called a difficult road ahead, but one "worth trying."

German Chancellor Angela Merkel said Zarif's visit was "a parallel event in the same spot" and not part of the G7 meeting, but that it was worth taking any chance to de-escalate tensions with Iran in the current situation.

The ministry spokesperson had previously said "there will be no meetings or negotiations" with US officials.

US President Donald Trump earlier declined to comment on reports that Zarif had flown to the summit.

Relations between Tehran and the US have deteriorated significantly since Trump withdrew from the 2015 nuclear deal with Iran and reimposed tough sanctions on its oil exports last year.

The US has also vowed to increase its military presence in the region to monitor Iranian activities, particularly the Islamic country's attempts to export oil in defiance of US sanctions.

Iran's multiple seizures of foreign oil tankers in the strategically important Strait of Hormuz, which is used to transport one-third of the world's seaborne oil supply from energy-rich Middle Eastern countries, has further escalated tensions in the region.

A tough task for Macron

Macron, who met with Trump on Saturday, said the US and France shared the same objective on Iran: to prevent the country from getting nuclear weapons.

However, European leaders and Trump disagree on how to deal with the Islamic Republic. The European Union wants to continue negotiations with Tehran to salvage the 2015 nuclear deal, whereas the US wants to increase pressure on the Islamic country.

Macron also held talks with Zarif on Friday to ease the crisis, proposing measures to provide Iran with an economic compensation mechanism. He also suggested that some US sanctions on Iran could be lifted.

Trump, however, has made no indication he will ease sanctions. It is also unclear what kind of compensation mechanism Macron was referring to.

In return of some concessions, France expects Iran to fully comply with the nuclear deal and restart negotiations that would include its ballistic missile program and regional activities.

During a bilateral meeting with Japanese Prime Minister Shinzo Abe on the G7 sidelines, Trump said he's not stopping any leader from talking with Iran. "If they want to talk, they can talk," the US leader reportedly said.

The list of issues for this year's G7 summit is long, with escalating trade tensions with the US, the UK's pending exit from the EU and fires in the Amazon looming over leaders as they gather in southern France. (24.08.2019)

The Iranian oil tanker Adrian Darya 1, formerly known as Grace 1, has changed its destination to a port in Turkey. The US has threatened to sanction any party that takes the oil. (24.08.2019)

Iran's president has urged Washington to drop paralyzing sanctions as a confidence-building measure for direct talks. The US has increased pressure against the Islamic republic amid rising tensions in the Persian Gulf. (06.08.2019)