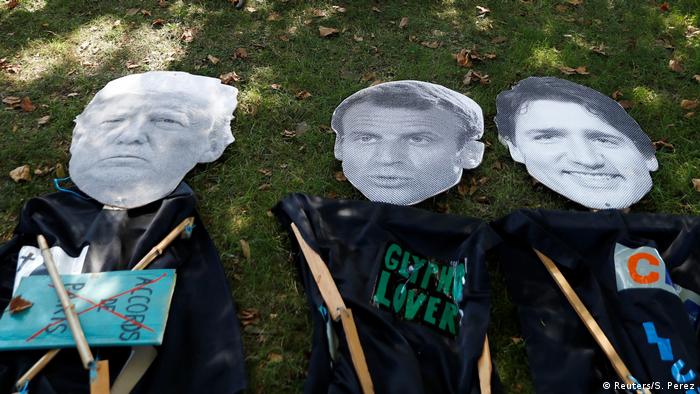 The first exchange of blows took place even before the start of the G7 summit: between French President Emmanuel Macron and his Brazilian counterpart Jair Bolsonaro.

Macron accused Bolsonaro of "lying" to him on Brazil's stance on climate change. The French president said he would therefore block a free trade deal struck in July between the European Union and the South American trade bloc Mercosur, which includes Brazil. Ireland also threatened to block the trade pact.

Bolsonaro then blasted Macron for having a "colonialist mentality." Since then, Bolsonaro pledged to send in Brazil's armed forces to help combat the fires.

In this way, the emotive issue of climate change produced the first bang even before the start of this year's G7 meeting, taking place in the French town of Biarritz on August 24-26.

Turned into a ghost town

The city center of Biarritz, a popular Atlantic seaside resort, has been placed under tight security to prevent any untoward incidents during the gathering of the G7 leaders.

Authorities have drafted more than 13,000 police and gendarmes into the city, with residents and workers needing accreditation to access much of the city center. Biarritz is known for its majestic Hotel du Palais, built in the 19th century by Emperor Napoleon III as a summer villa for the Empress Eugenie.

The magnificent summer villa is perhaps not the most suitable place to discuss global inequality, as critics of the G7 meeting have already mockingly pointed out.

Authorities are allowing campaign groups and demonstrators to congregate in the towns of Hendaye and Irun, which straddle the France-Spain border 30 kilometers (18.6 miles) away.

There they will hold a "counter-summit" that touches on themes ranging from the end of capitalism and climate change to the fight for social justice and the advance of feminism.

The counter-summit will conclude with a protest in Hendaye, which lies beneath the foothills of the Pyrenees, on Saturday as the leaders arrive.

Should there be riots,as happened at some previous summits, they will take place far away from the perfectly shielded G7 summit venue.

Before the official start of the G7 meeting, the US and China fired the next shots in their ongoing trade dispute. It's no coincidence that Beijing chose this weekend to announce its decision to impose a new round of tariffs on $75 billion (€66.7 billion) worth of US goods.

US President Donald Trump immediately struck back on Twitter, lamenting the billions of dollars the US had lost to China over the years due to what he called unfair trade conditions and theft of intellectual property. He then further raised US tariffs on Chinese goods.

It's not just the escalating trade row with China that can spoil Trump's mood. The rising risk of a US economic recession, which could spoil his re-election chances, his quarrel with the head of the Federal Reserve about the right monetary policy and, in fact, every other political issue has the potential to spoil the president's mood.

The situation offers a kind of guarantee that he will arrive in Biarritz in a mood of maximum belligerence.

Under these circumstances, it's unlikely that the gathering will produce any constructive solutions, particularly when it comes to forging a new partnership with China, in which the EU is also very much interested.

In Biarritz, the most pressing questions on trade would be about how to reform the World Trade Organization and ensure the future of a rule-based global trading order. Another issue relates to finding a common position on Beijing.

This is Boris Johnson's first G7 summit as British prime minister. In contrast to what much of the British press reported about his visits to Berlin and Paris this week, Johnson did not make any progress on Brexit. And no breakthroughs are expected in Biarritz.

The British leader also has to perform a delicate balancing act. He needs to have the Europeans on side as security partners and for a successful Brexit. This limits his options on the foreign policy front, and Johnson may not be able to abruptly deviate from the common EU position on Russia or Iran, among other things.

On the other hand, the US president may try to use the British prime minister to divide and attack the EU, praise Brexit and make random statements about striking a free trade agreement with the UK in the post-Brexit era. Against this backdrop, Johnson's diplomatic skills might be put to test at Biarritz.

A nightmare for the host

Hosting the G7 summit and welcoming the heads of state and government of the world's most industrialized nations used to be an honor. But in recent years, it's turned into a nightmare. The French president has done everything he could to prepare for the meeting as best he can.

But it looks as if all these efforts might come to naught, thanks to Trump. The US leader appears set to continue his hard line against Iran, while making noises in favor of forgiving Russia's annexation of Crimea and inviting Putin back into the club so the G7 would again become the G8.

Trump regularly criticizes the EU and its unity, and his ideology of "America First" prevents reforms to the global trading mechanism. Still, the EU, Japan and Canada cannot reform the international world order without US participation.

For Macron, this situation is a political nightmare.

He put the issue of climate change on the summit agenda, in view of the devastating forest fires in the Amazon. The majority of the participants in Biarritz might agree with him, but not the US president, who sees climate change as a business idea, because the melting glacier ice suddenly makes polar regions like Greenland a desirable possession.

The recognition of these differences might have prompted Macron to cancel the traditional joint communiqué. The French host likely knows that an agreement is impossible and therefore wants to prevent the summit from being officially declared a failure.