US: Donald Trump reacts to China with tariff increase

The US president increased tensions with the hike as the stock markets went into a tailspin. Trump tweeted that he would be increasing tariffs by 5% on $300 billion of Chinese goods. 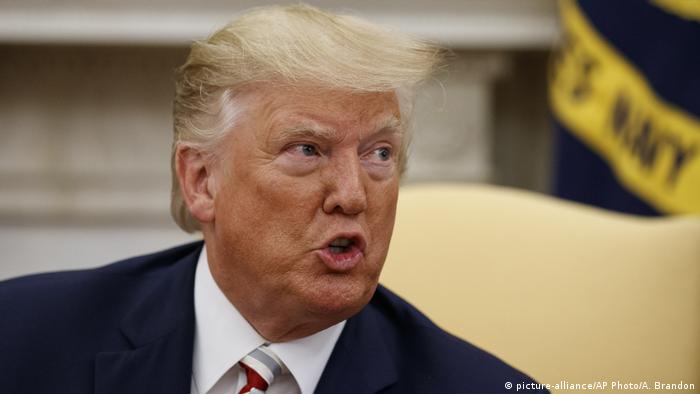 US President Donald Trump raised the stakes in his country's trade war with China on Friday by increasing tariffs on Chinese imports.

This came in direct response to Beijing raising taxes on $75 billion worth of US products.

As part of a string of tweets, Trump said he would be increasing levies on $300 billion of Chinese goods from 10% to 15%. The Office of the US Trade Representative also said existing tariffs on another $250 billion of Chinese imports would go up from 25% to 30% from October 1.

Earlier Friday, the president said he "hereby ordered" US firms to look for alternatives to doing business in China.

The rising tensions between the world's two biggest economies caused the stock market to tumble. The Dow Jones Industrial Average closed down 643 points — and that was before Trump announced the new fees.

One US financial service provider, JP Morgan, had predicted that Trump's latest move would cost the average household approximately $1,000 a year.

Other experts were equally dumbfounded.

"It's impossible for businesses to plan for the future in this type of environment," said David French, senior vice president of government relations at the National Retail Federation. "The administration's approach clearly isn't working, and the answer isn't more taxes on American businesses and consumers. Where does this end?"

The latest twist came toward the end of a tumultuous day at the White House.

President Trump lashed out at Jerome Powell, chairman of the Federal Reserve. Powell, who Trump nominated for the role in 2018, had told a meeting of central bankers that the president's trade wars had complicated the Fed's ability to set interest rates and contributed to a global economic slowdown.

The US has announced a delay imposing tariffs on certain Chinese products that had been earmarked for the measure from next month. China has said the tariffs were "not a constructive way" to resolve the trade conflict. (13.08.2019)

Donald Trump has suggested China resolve ongoing tension with Hong Kong before hashing out a trade deal with the US. The remarks follow his decision earlier this week to postpone imposing further tariffs on Beijing. (15.08.2019)

What's in a name? Clearly a great deal in the high-stake trade war between the US and China, which has escalated after US President Donald Trump named China a currency manipulator, says DW's Clifford Coonan. (06.08.2019)