The US has announced a delay imposing tariffs on certain Chinese products that had been earmarked for the measure from next month. China has said the tariffs were "not a constructive way" to resolve the trade conflict. 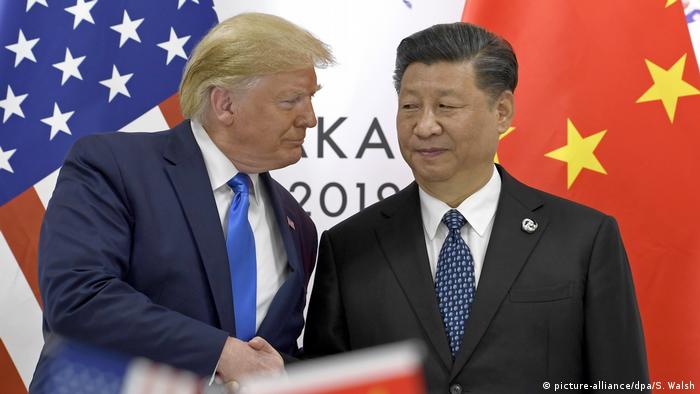 The United States said on Tuesday that it is delaying tariffs on some Chinese-made goods — including cellphones, laptops, shoes and clothing — that had been targeted for the measure from next month as part of a spiraling trade war.

Other Chinese items will be removed from the list of goods which will be hit with a 10% tariff from September 1.

The Office of the US Trade Representative said it would go ahead with tariffs on about $300 billion (€268 billion) of other Chinese goods imported to the US in a dispute over Beijing's aggressive trade policies.

News of the delayed tariffs triggered a rally on Wall Street that saw the Dow Jones surge 2%.

The next round of talks between China and the US is planned for next month in Washington, but the deterioration in relations has cast doubt on whether the meeting will take place.

US President Donald Trump accused Beijing of continuing to renege on its commitment to buy US agricultural goods.

"As usual, China said they were going to be buying 'big' from our great American Farmers. So far they have not done what they said. Maybe this will be different!" Trump posted on Twitter on Tuesday.

Meanwhile Chinese Vice Premier Liu He spoke with US Trade Representative Robert Lighthizer and US Treasury Secretary Steven Mnuchin on Tuesday, China's Ministry of Commerce said in a statement.

The Chinese side said it made "solemn representation" on the tariffs.

"Both sides agree to talk again on the phone within two weeks," the statement read.