US President Donald Trump has announced fresh tariffs on an additional $300 billion worth of Chinese goods, starting in September. China has said the tariffs are "not a constructive way" to resolve the trade conflict. 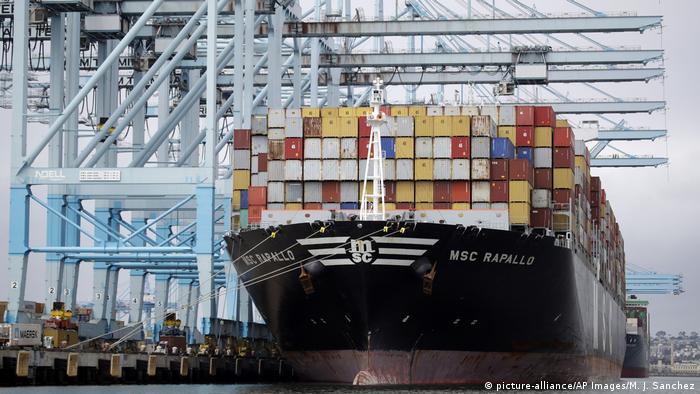 The United States will start taxing $300 billion (€270 billion) worth of Chinese imports with a new 10% tariff on September 1, President Donald Trump said on Thursday.

Trump announced the move on Twitter, saying the new levy included Chinese products that had not previously been affected by US tariffs. Some $250 billion worth of Chinese goods are already subject to a 25% tariff.

Trump said China had pledged to purchase large quantities of US agricultural products but had not yet done so. He also alleged that China did not follow through on a promise to stop the sale of fentanyl to the US, which has been blamed on worsening the opioid crisis.

Global markets fell on hearing the news. Oil prices dropped 7%, while US retailers expected to be hit by higher prices led losses on Wall Street. The S&P 500 ended the trading day down 0.90% to hit one-month lows, after being up earlier in Thursday's trading. China's onshore yuan slumped to its lowest in almost a year as Chinese policymakers look for ways to shore up its slowing economy.

On Friday, the pan-European STOXX 600 index dropped to a six-week low, falling 1.9%.

Consumers, retailers to be hit

The tariffs on a range of finished products such as sneakers, appliances and toys are likely to raise consumer prices, experts said. They may also force the US Federal Reserve to lower interest rates again to get out in front of any damage to the US economy amid a global slowdown and heightened trade risks.

Retailers have criticized the announcement.

"We support the administration's goal of restructuring the US-China trade relationship. But we are disappointed the administration is doubling down on a flawed tariff strategy," said David French, senior vice president of the National Retail Federation.

"These additional tariffs will only threaten US jobs and raise costs for American families on everyday goods."

Despite the new tariffs, Trump said negotiations with Beijing will continue.

"We look forward to continuing our positive dialogue with China on a comprehensive trade deal, and feel that the future between our two countries will be a very bright one!" the US leader wrote on Twitter.

US Secretary of State Mike Pompeo said "decades of bad behavior" from China had hindered free trade between the world's two largest economies.

Pompeo continued: "For decades, China has taken advantage of trade ... It's time for that to stop. President Trump said we're gonna fix this. And to fix it requires determination, and that's what you saw this morning."

China's Commerce Ministry said in a statement that the tariffs were a violation of Trump's recent agreement with President Xi Jinping and that "all the consequences will be borne by the United States."

The two sides met for talks in Shanghai last month to ease trade tensions and agreed to hold further discussions in Washington in September, although a date has not been set yet.

Trump has accused China of using predatory tactics, including forcing foreign companies to hand over technology as well as stealing trade secrets. The dispute has weighed on global markets and soured relations between Washington and Beijing.

China has issued its own retaliatory tariffs, taxing $110 billion worth of American goods, primarily targeted at agricultural products.