China retaliatory tariffs on US goods come into force | Business | Economy and finance news from a German perspective | DW | 31.05.2019

No end seems to be in sight for the bitter trade spat between the US and China, as Beijing's retaliatory tariffs on US goods kick in. China now plans to create a blacklist of "unreliable" foreign firms. 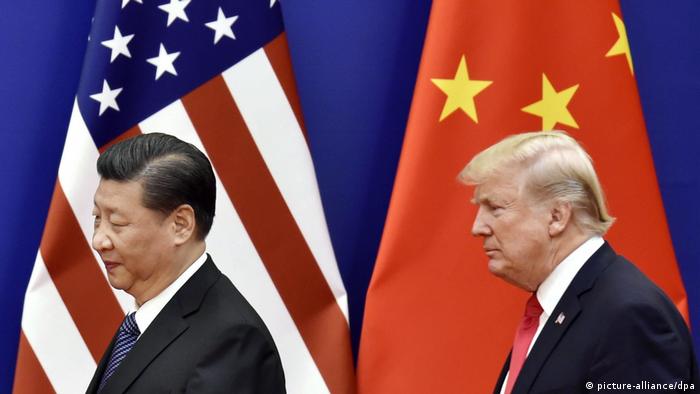 Beijing on Friday said it would create a blacklist of "unreliable" foreign firms and individuals, marking a new escalation in the increasingly acrimonious trade dispute between the United States and China. The move is seen as a response to the US government's recent decision to blacklist Chinese tech giant Huawei, denying it access to domestic markets and restricting US sales to the company, though a 90-day reprieve was issued.

Huawei has been hit hard by the decision, with a number of American firms saying they would cut off business ties with the Chinese company.

"Foreign enterprises, organizations or individuals that do not comply with market rules, deviate from a contract's spirit or impose blockades or stop supplies to Chinese enterprises for non-commercial purposes, and seriously damage the legitimate rights and interests of Chinese enterprises, will be included on a list of 'unreliable entities,'" said commerce ministry spokesman Gao Feng.

The detailed measures of China's list will be announced in the near future, Gao said.

"The views are hardening on both sides. Such retaliation (China's latest retaliation threat) will only harden stance against China in Washington," Julian Evans-Pritchard, senior China economist at London-based consultancy Capital Economics, told DW.

Beijing's announcement comes a day before China's retaliatory tariffs on US products come into effect. In response to US President Donald Trump's latest round of tariffs on imports from China, Beijing earlier this month said it would increase levies on $60 billion (€53 billion) worth of US goods, starting June 1.

The US products facing a 25% tariff include:

China's retaliation came despite Trump's warning that "China should not retaliate," and if it did, then it "Will only get worse!" Beijing, for its part, said it would "never surrender to external pressure."

The tariffs and trade tensions between the US and China — the world's largest and second-largest economies respectively — have been a major source of anxiety worldwide. Many fear that the fallout could have repercussions not just for those two countries, but for entire global growth.

"Our model says that an across-the-board 25% tariff on China with a limited amount of retaliation would hit US GDP by 0.5% and Chinese GDP by 0.8%, all over a three-year period," analysts at US investment bank Goldman Sachs said in a research note.

"This is the net effect from 1) direct trade effects, which are positive for the US but negative for China, 2) the effects of higher inflation on real incomes, which mainly hit the US and 3) the effects of tighter financial conditions, which are also most negative in the US," they pointed out.

Washington and Beijing resumed their tariffs battle after trade talks in Washington collapsed in May without a deal, with both sides blaming each other for the failure. While the US accuses China of reneging on previous commitments, China says the US must show "sincerity" if negotiations are to resume.

Both sides also disagree on how the tariffs are impacting the Chinese economy. Trump said on Thursday the levies were having a "devastating effect" on China; a day later Beijing dismissed it as US "lies."

The tit-for-tat tariffs come at a time when China's economic growth is slowing down. The Asian giant's economy is expected to expand by about 6.2% this year, down from 6.6% last year.

Some experts, however, believe China's slowdown is not entirely due to the tariffs. "I think the slowdown is probably 50% due to the trade war and 50% due to the hit to credit from the crackdown on shadow banking, which has hurt the credit channel to the private sector," Allan von Mehren, Chief Analyst with Danske Bank, told DW.

He believes the biggest impact the tariffs have had on the Chinese economy over the last year has been the uncertainty they have prompted and the subsequent damage to business sentiment. "It has given a hit to consumer spending and private investments, not least in the export sector," he said.

If trade tensions worsened, China's growth rate could fall below 6%, with knock-on effects on countries that depend on exporting to China, Angel Gurria, secretary general of the Organization for Economic Cooperation and Development (OECD), warned recently.

In recent days, reports have appeared in Chinese media imploring Beijing to consider curbing exports of rare earths to the US. China is a dominant player when it comes to the production of these elements, which are essential to the US tech industry as they are used to make everything from smartphones to televisions and military equipment. But analysts say Beijing may be reluctant to resort to this move to strike back at the US.

Trump is expected to hold talks with Chinese President Xi Jinping on the sidelines of the G20 summit in Osaka, Japan, set for June 28-29. Expectations of a breakthrough, however, remain low. "It could be very difficult" for both leaders to resolve the trade issues, Dai Xianglong, a former head of China's central bank, was quoted by the AFP news agency as saying.

"Since raising tariffs, the US has beaten down Chinese tech companies, and even halted US-China technology contacts, stopped Chinese students from going to the US to study, and in the future will roll out new measures," Dai said.

Still, analyst Evans-Pritchard said the two leaders "have left the door open to another truce at G20."

"I don't think Xi and Trump would be meeting in the first place if they were not looking at something positive to come out of it," he added. "I am more concerned about Trump's motivations. Part of me wonders, whether he wants a deal at all before the elections in 2020 and that means the G20 meeting will at most lead to a temporary delay (in further tariffs.)"