US businesses in China are increasingly worried about the trade conflict between the US and China. They are bearing the brunt of tariffs and non-tariff barriers adopted in recent months, a new survey said. 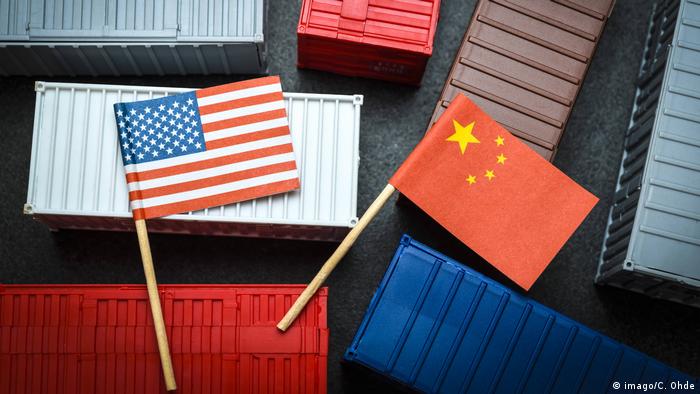 Three-quarters of US companies in China say they are being hit hard by the ongoing US-China trade dispute, according to a new survey released Wednesday by the American Chamber of Commerce in China and its sister organization in Shanghai.

The poll was conducted between May 16 and 20, days after Washington more than doubled duties on $200 billion (€179.3 billion) worth of Chinese goods. Beijing retaliated by charging higher tariffs on $60 billion of American products.

Firms manufacturing in China were the hardest hit, with more than 80% reporting adverse affects from both US and Chinese tariffs. Nearly half of the 250 respondents said they have experienced non-tariff retaliatory measures in China since last year. About one in five US companies experienced increased inspections, similar to the proportion reporting slower customs clearance.

Furthermore, the tariffs and rising protectionist tendencies have prompted many American companies to change their supply chain strategies, the survey revealed. It showed that 35% of companies would adopt an "in China for China" strategy — sourcing within China and targeting the domestic market — as a result of tariffs. But over 40% said they were "considering or have relocated" production facilities outside China, with Mexico and Southeast Asia the preferred alternatives.

However, US President Donald Trump's efforts to persuade American firms to move their production lines back home don't seem to be effective, as fewer than 6% of the surveyed businesses said they have moved or are considering moving their factories to the United States.

The Trump administration initiated the trade row last year and began slapping tariffs on imports from China, in a bid to extract major economic concessions from Beijing. The US also accuses China of unfair trade practices such as forced technology transfers, intellectual property theft and favoring domestic firms over foreign companies.

After a six month ceasefire, trade talks between the two sides broke down earlier this month, prompting the US decision to increase punitive duties on Chinese imports and Beijing's subsequent retaliation.

The two sides have so far exchanged tariffs on more than $360 billion in two-way trade. The conflict has widened recently with Washington taking steps to bar US tech sales to Chinese telecom giant Huawei.

Meanwhile, China's Ambassador to the United States Cui Tiankai on Tuesday blamed the United States for the collapse of trade talks. Tiankai said in a Tuesday interview with Fox News that Washington repeatedly "changed its mind overnight" and sunk deals that could have ended the two countries' trade war.

Despite the rising tensions, more than half of respondents in the survey said they favor protracted trade negotiations to continue in order to address "structural issues to allowing them to operate on a more level playing field."

Others wanted a quick deal and a return to the "pre-tariff predictability and stability" that existed before the world's two biggest economies began their trade conflict.

Chinese investment is causing disquiet in a number of places, particularly in the US and Europe, according to a new survey. The sentiment poses a problem for Chinese firms seeking to expand their global footprint. (20.05.2019)

How much damage are Trump’s tariffs doing to the Chinese economy?

Chinese exports to the US have been subject to the Trump tariffs since last July. According to the US President, this is wrecking the Chinese economy but does the Asian power ultimately have more stomach for this fight? (16.05.2019)