Google is suspending some services for Huawei smartphones after the Chinese company was placed on a US trade blacklist. The move effectively bars Huawei from making phones and tablets for sale outside China. 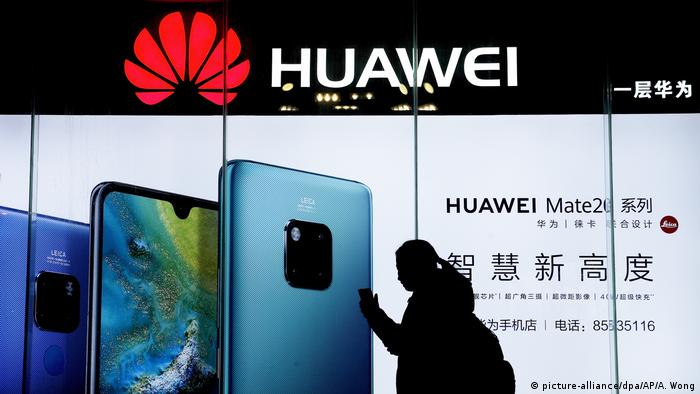 US President Donald Trump may just have done a huge favor to South Korean electronics behemoth Samsung with his clampdown on China's Huawei, who he accuses of aiding Beijing in its spying efforts.

Huawei's key US suppliers, including chipmakers Qualcomm and Xilinx, are reported to have said they will stop supplying the Chinese company with immediate effect. Google dealt a further blow by saying it will block Huawei from using some Android services and apps on its devices.

The disruption to Huawei follows the US government's decision to add the company to its "Entity List," citing security concerns and Iran sanctions violations. The move makes it incumbent on companies that supply US technology to Huawei to apply for a license. Experts say that US officials are unlikely to approve such applications.

"By placing Huawei on a US technology trade blacklist, Trump has effectively banned Huawei from building smartphones and tablets for sale outside China, and from selling laptops anywhere," Avi Greengart, a tech analyst at Techsponential, told DW.

"Huawei can bypass Qualcomm as it makes some of its own processors and modems, but it cannot sell smartphones outside China without Google's Android operating system, Google's Play store, and regular software and security updates," he said.

The Chinese company does not separately disclose revenue from its smartphones business but its consumer device business, which sells phones, laptops and other gadgets, accounted for 48% of Huawei's $107 billion (€96 billion) in revenue last year. The unit is the Chinese company's biggest source of revenue, topping its key carrier business.

Smartphones made by Huawei and its Honor unit have been largely kept off US shelves, owing to the US government crackdown. But they are the fastest-selling phones in China and Europe, where they enjoy a 35% and 20% market share respectively.

While the US clampdown may not hurt Huawei's Chinese market, where Google services are already unavailable, it is a potential death blow to its ambitions elsewhere.

"Huawei is not selling hugely differentiated phones. The gap will be filled immediately by other vendors, most likely by Samsung," independent tech analyst Richard Windsor told DW.

Huawei has been exerting pressure on Samsung by eroding its volume advantage in the past two years, Windsor said.

"Huawei falling away would remove Samsung's biggest competitor. This would herald both a market share jump and a return of the volume advantage that allowed it to make such a good return," Windsor said.

Samsung's shares listed on the Korea Exchange have jumped about 4% since Google's announcement.

Chinese smartphone makers Oppo and Xiaomi, which have been growing rapidly in Europe, are also likely to pick up some of Huawei's business.

Analysts say Apple could also benefit from Huawei's plight but its gain may be short-lived.

"There is probably some upside for Apple as well, but not enough to offset the risk to Apple from possible Chinese retaliation against American tech firms," Greengart said.

There have been suggestions that the iPhone maker could be a target of Chinese government retaliation against US for its attempt to choke Huawei, a national champion and source of Chinese pride. China accounts for nearly a fifth of Apple's revenue.

But targeting Apple, which is a major employer inside China, will be a difficult choice for Beijing to make especially at a time when the Chinese economy is struggling.

Apple shares listed on NASDAQ have fallen more than 3% since Monday.

Google said it would continue to support Huawei's existing devices, but future Huawei smartphones would not have its popular flagship services such as its Play Store, Gmail, maps and search.

The move means Huawei would only have access to the basic version of the popular Android operating system (AOSP), which is publicly available.

"Vendors can take Android AOSP as a base for application compatibility and add their own layer on top — and Huawei will certainly do so if the trade blacklist continues — but the resulting phone will always be at a competitive disadvantage to Android phones that have, well, Android," Greengart said.

"Google services are largely absent from China so alternative app stores abound there, but everywhere else in the world, Google's Play Store, Gmail, and Maps are core requirements to make a smartphone smart."

Analysts say Google's move will prompt smartphone makers to seek alternatives to Android in the long term. Huawei, which had been anticipating losing access to US technology, has confirmed that it's developing its own operating systems.

But success of a new operating system in a competitive smartphone market is anything but guaranteed.

"Smartphones are a mature category that have consolidated around two platforms: Google's Android and Apple's iOS," Greengart said. "As Microsoft (and BlackBerry, Palm, and others) discovered the hard way, it is now impossible to build a viable mobile application ecosystem outside of Android or iOS."

On Monday, the US eased the trade restrictions on Huawei by allowing it to buy US components and technology to service existing telecoms networks and deliver software updates to its smartphones. But Huawei is still restricted to buy US technology to make new products.

Huawei founder Ren Zhengfei told reporters on Tuesday that the restrictions will not hurt Huawei's prospects and that the company had supply backups.

He said Huawei was in talks with Google for possible "emergency relief measures" for its smartphone business.

Experts say President Trump may have blacklisted Huawei to squeeze trade concessions from China in the ongoing spat between the world's largest economies.

"I think that the USA has no particular desire to put Huawei out of business," Windsor said. "But it does want to have what it considers to be a fair trade deal with China and companies that are dependent on USA technology."

Security and regulatory troubles on both sides of the Atlantic threaten the future of China’s ZTE and Huawei. But to what extent are the recent disputes linked to Trump's attempts to rein in Beijing's economic ambitions? (19.04.2018)