Amazon fires: Can international pressure help put them out? | Environment | All topics from climate change to conservation | DW | 23.08.2019

Wildfires blazing in the Amazon have sparked an international dispute. As Brazilian President Jair Bolsonaro dismisses foreign leaders' condemnations, what can the international community really do to protect the Amazon? 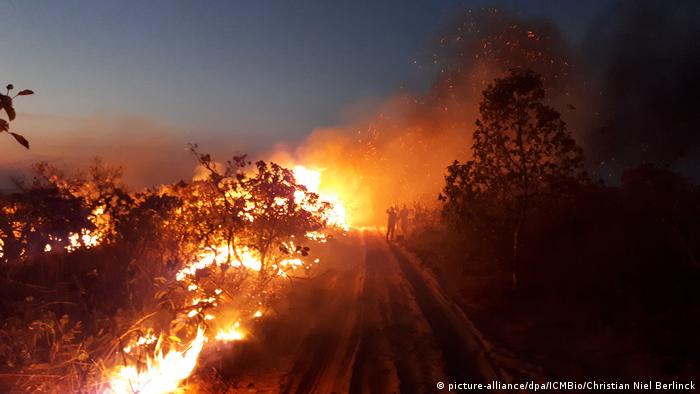 With a record number of fires raging in the Amazon rainforest, international leaders are joining forces to call for action to stop them. The situation is an "acute emergency," German Chancellor Angela Merkel's Spokesman Steffen Seibert said on Friday, adding that Merkel backs French President Emmanuel Macron's call on the G7 to address the issue at its summit this weekend.

But such calls for action from outside Brazil, have been met with rebuttal and even mockery from within.

Brazilian leader Jair Bolsonaro has pledged to allow more farming and logging in the Amazon, and has been accused of promoting agricultural development at the expense of the forest.

With neither words of condemnation nor funding cuts appearing to have an impact, the international community is now considering its options.

Political differences are a huge hurdle, particularly the rise in nationalism, according to Klaus Jacob, a political scientist at FU Berlin's Environmental Policy Research Center. "It makes international negotiation and the protection of the global common good really difficult," he told DW.

"In the end, what is needed is something legally enforceable," Jacob continued. "Something like an international court for climate issues, like the one we have for trade issues. But I'm afraid the international community, as it stands now, with this heavy emphasis on nationalism, is quite far from reaching this." 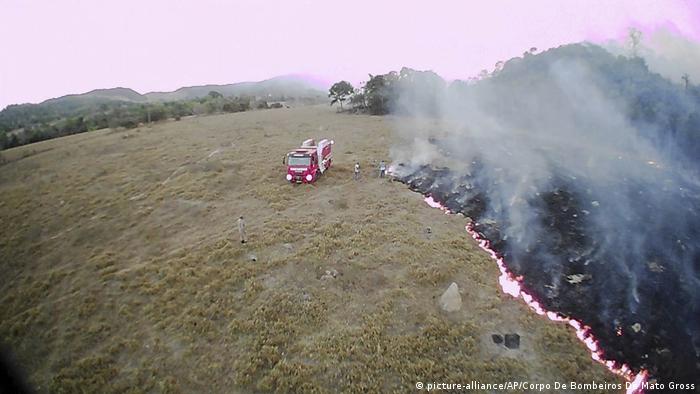 In a statement on Friday, Irish Prime Minister Leo Varadkar said his country may vote to block a trade deal between the EU and South American nations if Brazil fails to curb record fires ravaging the Amazon.

"There is no way that Ireland will vote for the EU-Mercosur Free Trade Agreement if Brazil does not honor its environmental commitments."

To kill the deal, Ireland would need other EU countries to help form a blocking minority.

Leveraging the Mercosur agreement would enable the EU to put significant pressure on Brazil, said Martin Häusling, a German MEP from the Green party who serves on the EU's agriculture committee.

"The EU has to exert economic pressure on Brazil: When imported products come from destruction, then we have to stop imports in these sectors," he told DW.

On Friday, Finland, which currently holds the rotating presidency of the European Council, called for the EU to look into the possibility of banning Brazilian beef from its markets due to devastation caused by the wildfires.

Brazil is heavily reliant on exports such as soya beans, meat and sugar. "Countries could create embargoes for Brazilian products not considered environmentally safe," Jessica Gomes from the GIGA Institute of Latin American Studies in Hamburg told DW.

"Economic sanctions and product embargos seem to be a more effective policy because they hit it where it hurts, so to speak," she said.

Christoph Bals of the NGO Germanwatch said the loss of the Amazon should also be an issue for the UN Security Council.

"Reaching a tipping point in the Amazon would be a disaster for humanitarian security, including food and water supplies, in the entire region," he told DW.

Colombia, home to part of the northern Amazon, said it was already working to contain the fires as they headed towards its territory.

"We are willing to collaborate with our neighbors in this common cause," the Foreign Ministry said in a statement on Thursday. Paraguay and Bolivia are also battling separate wildfires that have devastated large areas of their rainforests.

In Brazil itself, federal prosecutors have launched an investigation into the massive wildfires in the Amazon region. The probe will look into why a "day of fire," announced by farmers in the region last week, was not barred from taking place in the state of Para, prosecutors said on Thursday. While prosecutors may punish those responsible for environmental crimes, Carlos Nobre said the potential impact of the investigation was unclear amid a climate of impunity for those pushing agricultural frontiers into the Amazon.

"Hopefully, respect for the law will prevail, but it is still hard to assess who will win this political and environmental battle."

Nearly 73,000 fires were recorded between January and August, compared with 39,759 in all of 2018, according to the latest figures from INPE, Brazil's National Institute for Space Research, which monitors forest fires in the Amazon region. The number is the highest since records began, and an 83% increase on the number of fires in the same period last year.

Demonstrations have been held around the world lamenting the fires in the Amazon rainforest. Brazilian President Jair Bolsonaro, who has encouraged agriculture in the region, is facing intense international pressure. (23.08.2019)