A wildfire on Spain's Gran Canaria has forced thousands of people to evacuate. Some 6,000 hectares have burned so far and the fire has entered the northwestern Tamadaba natural park. 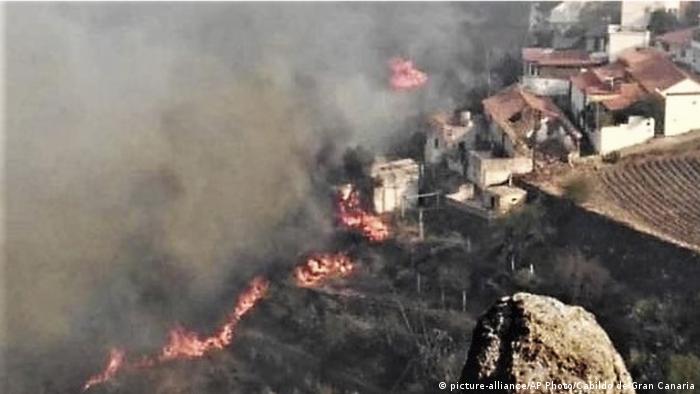 An out-of-control wildfire on the popular Spanish holiday island of Gran Canaria has forced 9,000 evacuations, and the fire has now reached a natural park, authorities said on Monday.

"It's a huge forest fire, extremely serious, which happened in a heat wave," and it is still not under control, Canary Islands President Angel Victor Torres told reporters. "This is an environmental tragedy."

Altogether, 1,000 firefighters and other crew and 14 water-dropping helicopters and planes were working to control the blaze, which is estimated to have destroyed 10,000 hectares (24,700 acres), according to emergency services. Around 9,000 people have been evacuated from Gran Canaria.

The blaze is the third in 10 days and has so far affected the mountainous central part of the island rather than coastal areas popular among tourists in the summer months.

In a statement, the Canary Islands government said the tourism industry on Gran Canaria remained unaffected "given that the fire is confined to upland areas," with no resorts impacted and no flight delays.

The Canary Islands are a major tourist destination. They received 13.7 million foreign visitors last year, with more than half of them from the UK and Germany.

Lourdes Hernandez, a wildfires expert at the World Wild Fund for Nature (WWF), told French news agency AFP that the blaze had entered the Tamadaba natural park, an untouched pine forest that represents "the main green lungs of the island."

The Tamadaba natural park is a particularly difficult area for firefighters to intervene in.

The fire is also threatening the Inagua nature reserve, another area of major biodiversity.

"Tamadaba is lost, we can't enter," firefighter chief Carlos Velazquez told reporters. "When (weather) conditions begin to change that is when we can begin to control the fire," he added.