A Science Ministry report that showed an increase in deforestation of the Amazon rainforest has been criticized by President Jair Bolsonaro, and may have led to the firing of its author. 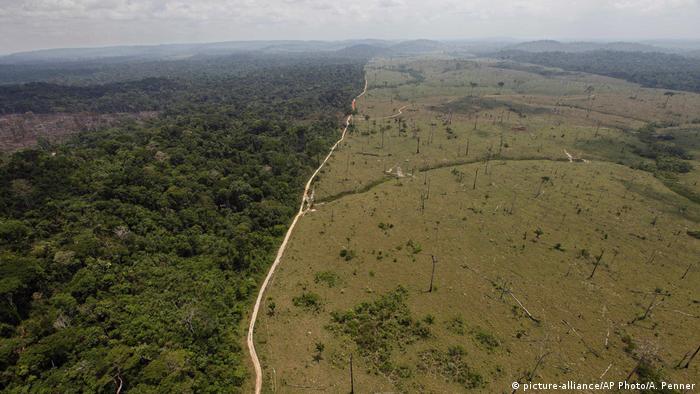 The head of Brazil's space research agency (INPE), Ricardo Galvao, said on Friday that a public dispute with President Jair Bolsonaro had led to his firing.

Galvao's departure came a day after the Brazilian president warned senior government scientists that their job was on the line if they betrayed his confidence.

"My words about the president have caused annoyance, so I'm going to be fired," said Galvao. A Science Ministry spokesperson said it was unclear if Galvao had resigned or been fired.

Bolsonaro's presidency has sparked international concern over increased destruction of the Amazon rainforest, which is expected to accelerate global warming.

The former army captain is close to the country's agribusinesses and has openly spoken about freeing up protected forests for development.

Preliminary data produced by INPE showed that some 920 square kilometers (355 square miles) of Amazon forest had been lost in June, an 88% increase in deforestation compared with the same month a year ago.

July data showed an even higher increase, though full data for that month has not been released by the agency.

Both Bolsonaro and his environment minister, Ricardo Salles, pushed back on the report and said that such information had caused Brazil great harm internationally.

"Our concern is not to work to come up with a figure. It is to say that the figure that was presented is not correct," the minister said.

Salles has previously clashed with environmentalists and often sides with agribusiness leaders in their criticism of Brazil's environmental governance.

Bolsonaro, a climate change skeptic, suggested that Galvao was "in the service of some NGOs."

The INPE president, in turn, blasted Bolsonaro for making "undue accusations against people of the highest level of Brazilian science" and compared his suspicions to "a joke by a 14-year-old boy."

"If minister Salles fought crime with half of the energy he spends fighting science and facts, the deforestation crisis would not have taken the proportion it has," the coalition said in a statement.

"Deforestation figures are bad in themselves. Lying will only increase the harm to the country," Astrini said.

Read more: Could Brazil's new ambassador to the US be a Bolsonaro?

INPE's figures made headlines last week when the UK's The Guardian newspaper and The Economist magazine wrote about the June deforestation increase and how Bolsonaro's policies were to blame.

In another damaging report, The New York Times wrote that a review of Brazil's public records found that Bolsonaro's government had relaxed enforcement measures such as fines, warnings and the seizure or destruction of illegal equipment in protected areas.

An organic smoothie producer and a boutique fashion store are among Western businesses whose supply chains are tainted by illegal deforestation in Bolsonaro's Brazil. (25.04.2019)

An increase in small-scale gold mining has taken a toll on the Amazon, increasing deforestation and polluting waterways, according to a new report. Mining in protected indigenous areas has increased exponentially. (11.12.2018)