The EU-Mercosur agreement would link more than 770 million people as part of the world's biggest free trade area. DW looks at what it all means. 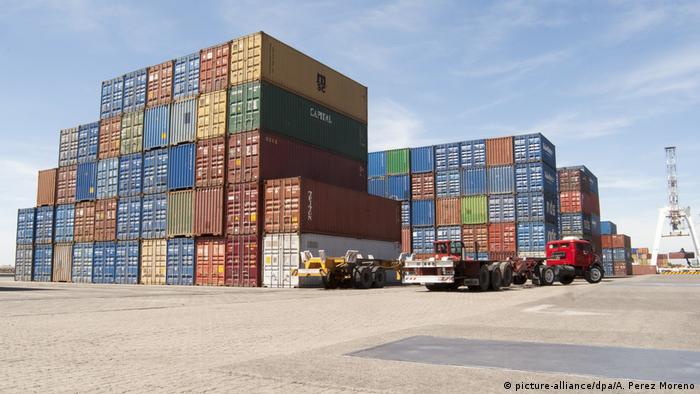 After nearly 20 years of talks, the European Union and Mercosur — the South American trading bloc of Brazil, Argentina, Paraguay and Uruguay — have agreed on a draft deal that would create the largest free trade area in the world.

Both sides currently trade more than €88 billion ($100 billion) in goods and €34 billion in services every year. EU and Mercosur leaders said they hope that a ratified deal will boost those numbers and bolster economic and job growth for the more than 770 million people who live on both continents.

Tariff reductions:The EU would eventually abolish 92% of the taxes on Mercosur imports. Mercosur would gradually eliminate its duties on 91% of EU goods, which the European Commission says amounts to €4 billion. This includes tariffs on clothing of up to 35%, chemicals up to 18%, wine up to 27% and the tariff on canned peaches of 55%.

More market access: Mercosur farmers would be allowed to export a set amount of beef at a preferential tariff rate and 180,000 tons of sugar and 100,000 tons of chicken to the EU each year.

Loosen public procurement rules: European companies would, for the first time, be able to bid for government contracts in the four Mercosur countries on equal terms as domestic companies.

Safeguard mechanism: Both blocs could use emergency tariffs or similar measures to prevent particular imports, including agricultural products, from flooding their markets. The procedure would allow governments to temporarily defend sensitive sectors that find it hard to compete under the new rules.

Geographic protections: The EU gives certain companies exclusive rights to use geographic place names for their goods. "Parma ham" or "Champagne" are some examples. The deal commits Mercosur to protect 357 European "geographic indicators" and the EU to protecting several South American indicators.

Protection of standards: The deal includes wording to protect food, environmental and working standards in both blocs. It explicitly commits all signatories to the emissions-reduction targets of the 2015 Paris climate deal and a "commitment to fighting deforestation."

Why did the talks take so long?

As with most trade negotiations, both sides worried about opening up their relatively protected or politically sensitive industries to more competition. Negotiations stalled multiple times over those differences.

The EU fretted about lower Mercosur standards giving their exporters an unfair competitive advantage. France was particularly concerned that the deal would lead to a flood of South American beef and biofuel imports.

On the other side, Mercosur countries worried about the competitiveness of their automotive sectors and resisted EU demands to recognize European geographic indicators or allow European companies to bid for government contracts.

As the talks entered their final stretch, French President Emmanuel Macron threatened to delay the deal again if Brazilian President Jair Bolsonaro, a climate change skeptic, pulled out of the 2015 Paris climate accord.

Who likes the deal?

European leaders: The head of the European Commission, Jean-Claude Juncker, said the deal was "a historical moment" and sent "a strong signal that we stand for rules-based trade." German Chancellor Angela Merkel welcomed the deal and Macron said it was a "good agreement," according to Reuters news agency.

European businesses: Europe's biggest trade associations, BusinessEurope and Eurochambres, also welcomed the deal. Eurochambres President Christoph Leitl said it was a "unique opportunity" to "foster stability and integration" between the two blocs. In Germany, the president of the Association of Chambers of Commerce and Industry, Eric Schweitzer, said the agreement was "positive news in an otherwise rather gloomy global economic environment."

Mercosur leaders: Bolsonaro said the "partnership has enormous potential" to bring "joy" to both continents, and Argentine President Mauricio Macri said it would "contribute enormous benefits to Argentine workers and companies." Paraguayan President Mario Abdo and the Uruguayan government also welcomed the deal.

Mercosur farmers: The agricultural association Sociedad Rural Argentina celebrated that the "historic agreement" would "improve access to a great number of Argentinian products, from different sectors, to the European market."

"Without the agreement we would have faced a progressive loss of competitiveness," Brazil's Association of Fruit Exporters (Abrafrutas) said.

Who dislikes the deal?

European farmers: Copa-Cogeca, an association of European farmers, said the EU had opened a "Pandora's box of double standards in agriculture." The main agricultural unions in Ireland, Germany and France also criticized the deal. Christiane Lambert of France's FNSEA union said it would "expose European farmers to unfair competition."

Environmental protection groups: European activists had called on the EU to walk away from talks because they feared that more beef exports from Mercosur would spur deforestation of the Amazon rainforest. Agricultural firms use former rainforest land for cattle or soy farming for cattle feed. Greenpeace Germany said the deal "comes at the expense of the climate and forests."

Argentina's SMEs: The agreement was not well received by Argentina's National Association of Entrepreneurs. "Small and medium sized enterprises are going to be the most affected by these policies," the organization said.

The only beneficiaries from the free trade pact would be "large multinational firms and exporters in the agribusiness, to the detriment of local industries," the organization stressed.

The four Mercosur governments, the 28 national governments of the EU and the European Parliament have to ratify the deal before it enters force. No timeline has been given.

Frontex suspends operations in Hungary over asylum system 4h ago

Controversial Polish abortion law to go into effect 5h ago