Opinion: Europe, not Donald Trump, holds the cards on trade

The EU and four South American countries have signed a milestone trade agreement. It's a clear signal to the US president about the importance of free trade, writes DW's Bernd Riegert. 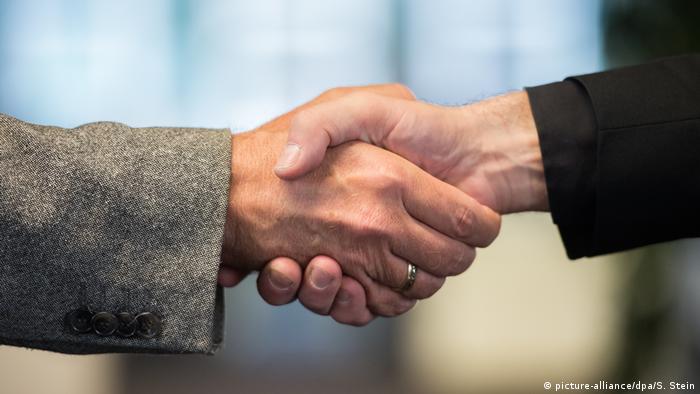 World trade is still possible even if the United States won't come to the table. The free trade deal struck between the European Union and the Mercosur bloc of four South American countries — Argentina, Brazil, Paraguay and Uruguay — proved that Trump's modus operandi is wrong.

While the rest of the world is banking on reducing trade barriers in order to open up markets, Trump is building walls of tariffs. At the two-day G20 summit in Osaka, the US president, who is committed to national unilateralism, did not show any willingness to renounce his punitive tariffs. In fact, they have become the favored tool of his sledgehammer approach to diplomacy.

It's an instrument that is still working because — for now — the US is economically strong and can still afford import tariffs, which are essentially paid by American consumers. But if the economy flattens out at some point, this could change quickly.

And at the G20 summit, the EU and the Mercosur countries have taken a step in the opposite direction. Their treaty, which has been in the pipeline for almost 20 years, shows that international cooperation is possible in the face of adversity — and that trade deals can be made in the Trump era without the cooperation of the US government.

This agreement creates the world's largest market, larger even than the European-Japanese free trade market created at the beginning of the year.

Europe is — and remains — a pioneer in world trade. The bloc has concluded over 70 trade agreements. Next on the agenda on Sunday is one with Vietnam, which is another country Trump is threatening with penalties.

Of course, the trade deal with the Mercosur bloc is not yet in effect — it still requires ratification. And it has already attracted strong criticism, particularly on the issues of meat exports and environmental concerns. Inevitably there is a lot to contend with and the result will be a compromise.

The EU's other trade agreements with Canada or African countries may also be flawed, but the principle remains correct: trade, exchange and cooperation instead of nationalism, isolationism and trade wars.

A message to Trump

At the G20 summit, the United States again tried to throw a spanner in the works of the World Trade Organization (WTO) by refusing to appoint judges to the WTO Court of Appeal.

The US government is pushing for a WTO reform that is chiefly geared to serving American interests. This approach will not work. The WTO only functions properly when all members adhere to the same rules.

It is not just the US but also Russia and China that are showing their tendencies towards protectionism and safeguarding their own companies from competition. But this also has to stop if the WTO is to be reformed and trade expanded. Unfortunately, the Group of 20 did not get this far, despite a lot of lip service from national representatives.

It is good news that the EU and Mercosur countries were able to reach a deal during the Group of 20 summit and at a time when trade talks between the EU and US seem to be stalling. The message it should send to the White House, which Trump is turning into the world's biggest customs office, is to "Make trade great again."

Leaders have agreed on a climate deal similar to the one struck in Argentina in 2018. The US has again refused to commit to tackling climate change. (29.06.2019)

US President Donald Trump and Chinese leader Xi Jinping have agreed to restart trade talks. The US also confirmed it would not slap additional tariffs on Chinese exports for now. (29.06.2019)