Leaders have agreed on a climate deal similar to the one struck in Argentina in 2018. The US has again refused to commit to tackling climate change. 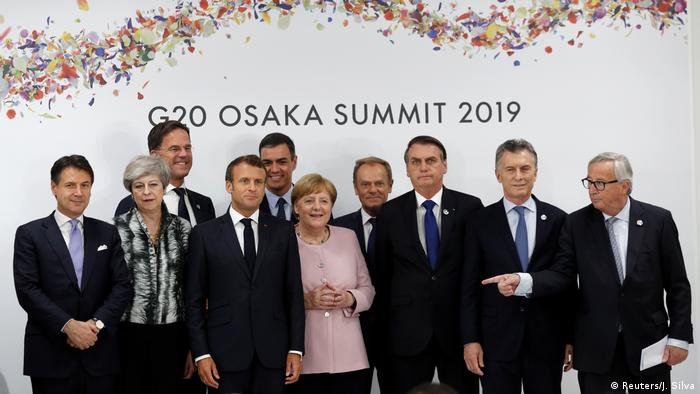 World leaders attending the 2019 G20 summit in the Japanese city of Osaka on Saturday agreed to a climate change deal similar to that signed in Argentina last year.

Speaking at the conclusion of the summit, Japanese Prime Minister Shinzo Abe said the leaders had found common ground on climate change despite "big differences" in the members' views.

"We will have a similar text to Argentina. A 19+1 declaration," German Chancellor Angela Merkel told reporters on the sidelines of the G20 meeting.

As at the G20 meeting in Buenos Aires, the new declaration states that the US reiterated its decision to withdraw from the Paris Agreement "because it disadvantages American workers and taxpayers."

The document said the signatories to the Paris Agreement reaffirmed their commitment to its full implementation.

To help achieve climate change prevention, the G20 nations "will look into a wide range of clean technologies and approaches, including smart cities, ecosystem and community based approaches, nature based solutions and traditional and indigenous knowledge," the final document read.

Merkel praised the agreement, telling reporters in Japan that "this process cannot be turned around."

Merkel added that some leaders present in Osaka had already indicated they were willing to increase their commitments to curb greenhouse gases by aiming for "net zero" emissions by 2050.

"In our view, climate change will determine the destiny of mankind, so it is imperative that our generation makes the right choices," said Chinese Foreign Minister Wang Yi at a news conference with his French counterpart and UN Secretary-General Antonio Guterres following the climate change talks.

Abe said the 20 leaders at the G20 summit had also confirmed the need for a free, fair and non-discriminatory trade policy.

Abe added that he had told US President Donald Trump and Chinese President Xi Jinping that it was extremely important to engage in constructive discussion to solve their trade tensions.

Following their talks, Trump and Xi said the US and China had agreed to resume trade talks, and Washington would not place any more tariffs on Chinese exports for the time being.

Presidents Donald Trump and Xi Jinping will talk about trade when they meet during the G20 summit, in an attempt to stop ties between the world's top two economies from tilting toward sustained confrontation. (27.06.2019)

Some 500 students symbolically blocked exits as legislators wrapped up their final legislative session before the summer recess. Last week, 40,000 protested against coal in the western city of Aachen. (28.06.2019)