Presidents Donald Trump and Xi Jinping will talk about trade when they meet during the G20 summit, in an attempt to stop ties between the world's top two economies from tilting toward sustained confrontation. 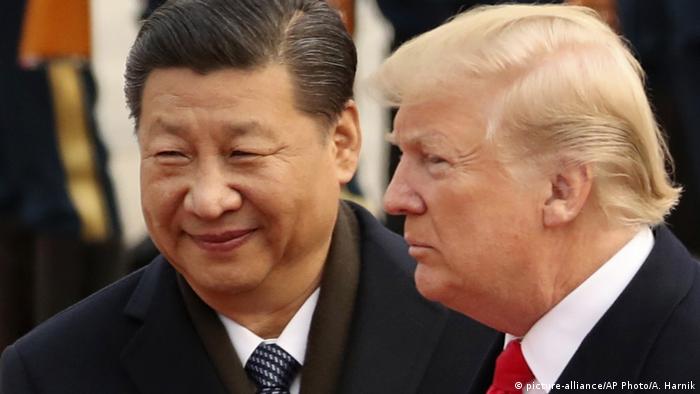 When the leaders of the world's top 20 economies gather in the Japanese city of Osaka on June 28 and 29 for their annual summit, all eyes of the business world will be on the meeting between US President Donald Trump and his Chinese counterpart Xi Jinping.

Trade will dominate the agenda of the two leaders, as escalating tensions and tit-for-tat tariffs have dragged relations between the world's two largest economies to the lowest point in decades.

Trump has already hit $200 billion (€176 billion) of Chinese imports with levies and threatened to slap duties on all remaining imports from China — more than $300 billion worth. Beijing has retaliated by applying its own tariffs on imports from the US.

It's going to be a "very important" meeting, US Treasury Secretary Steven Mnuchin said. He also raised hopes of an agreement by noting that a trade deal is "about 90%" complete.

But in an interview with Fox Business News, just hours before taking off for the summit, Trump warned of an even deeper trade conflict, saying China's remaining imports are "ripe" for tariffs. "China's economy is going down the tubes — they want to make a deal," Trump said.

"The Trump-Xi meeting is one of the last chances to avoid large damage to the US and Chinese economies, and also to other economies worldwide," according to Jost Wübbeke, director of Sinolytics, a Berlin-based consultancy specialized on China. "If there's no agreement, it would have quite negative repercussions for global trade."

But the chances of the leaders reaching a formal agreement in Osaka are slim, say analysts. Instead, Xi and Trump are more likely to agree on a temporary tariff truce, like they did during their last meeting in Buenos Aires in December.

"I think no one knows for sure what will happen, but the likelihood is they will probably reach an agreement to continue talking. So a truce is more likely than a substantive solution," Yukon Huang, an economist and China expert at the Carnegie Endowment for International Peace, told DW.

Even if they announce a truce, it doesn't solve the fundamental challenges the two countries face. "A truce would only extend the period of uncertainty, which is also not beneficial for the economy," said Wübbeke.

The deepening rift in US-China trade and investment relations has triggered jitters among businesses and investors over economic growth prospects worldwide. The escalating row has also jeopardized the rule-based multilateral trading system.

Western businesses and investors have long criticized China for making it harder for foreign firms to compete fairly in its vast market. They say they face an array of regulatory issues, hindering a level playing field on the Chinese market and their ability to freely do business there.

But Huang stressed that if the US' objective is to get China to implement market reforms, liberalize its investment policies and strengthen intellectual property rights, it is trying to "adjust behaviors." He added: "It's trying to adjust laws and regulations. It takes years to make these kinds of changes."

Many Chinese, however, view Washington's moves as a desperate attempt to win the strategic economic competition with China, as the Asian giant emerges as a leading high-tech power and increasingly pushes to wrest global technological and economic leadership from the United States.

"What Donald Trump really wants to achieve, and his successors would want to do the same, is to make sure that the US wins the economic and technological competition with China," Shen Ling, an economist at the East China University of Science and Technology, told DW. "To that end, the US will continue to try to put brakes on China's rise, through different means — a trade war, a tech war, or a financial war."

The US government's decision to blacklist tech giant Huawei has further strengthened this sentiment among the Chinese. The company has emerged as a pioneer of next-generation 5G mobile technology, and Washington sees its rise as emblematic of China's drive to dominate key future technologies.

To avoid creating the impression that the US moves are designed to hinder China from becoming a global technology leader, Wübbeke said Trump's approach should "be less aggressive, but more consequential." At present, it looks more like the US wants to contain China and limit its growing influence, he pointed out. "That doesn't seem like a smart economic policy, but rather a power game and a hegemonic conflict."

The US president's moves actually have a "significant negative impact" on American high-tech companies, experts say, pointing out that Chinese firms like Huawei buy most of the high-tech components they use from the US.

"Trump's moves would probably wipe out the profit growth of these high-tech American companies," said Huang. This will, in the long run, hurt the American economy more than the Chinese.

"If you look carefully at economic projections, particularly those done by the IMF, it will be clear that in the short term China faces more negative impact than the US, but in the long run, it's actually the US that loses more than China."

Economists worldwide have repeatedly stated that no one wins in a trade conflict and no one can totally avoid its impact. Institutions like the IMF have warned about the damage a protracted trade spat could wreak on the global economy.

Central banks in Europe and the US are talking about lowering interest rates, Huang noted. "They wouldn't be talking about that if they didn't foresee already a potential negative impact."

G20 finance chiefs said trade and geopolitical tensions have intensified but did not express a pressing need to resolve them. They proposed pro-growth tax policies. (09.06.2019)

The US-China trade dispute is high on the ASEAN summit agenda. The bloc's leaders are set to sign an economic partnership deal at their annual meeting in Bangkok, but not all countries want Beijing's economic hegemony. (22.06.2019)