US President Donald Trump and Chinese leader Xi Jinping have agreed to restart trade talks. The US also confirmed it would not slap additional tariffs on Chinese exports for now. 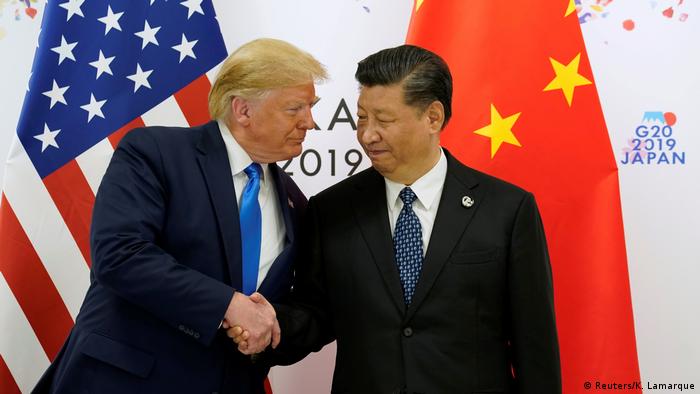 Chinese President Xi Jinping and US President Donald Trump on Saturday agreed to resume trade talks, following a high-stakes meeting on the sidelines of the G20 summit in the Japanese city of Osaka.

Trump said his meeting with Xi was "excellent" and that "we're right back on track," adding that the US was "going to work with China where we left off."

Washington has agreed not to slap new tariffs on Chinese exports "for at least the time being," while China will buy more US agricultural products, Trump confirmed at a news conference, corroborating earlier reports from China.

The planned levies on an additional $300 billion (€263 billion) worth of Chinese goods would have effectively extended tariffs to everything China exports to the US.

Many leaders had been eagerly watching to see if the pair could strike an agreement to ease tensions and end a trade war between their countries.

In a Foreign Ministry statement following the lengthy talks, Xi told Trump he hoped the US could treat Chinese companies fairly.

"China is sincere about continuing negotiations with the United States ... but negotiations should be equal and show mutual respect," the Foreign Ministry quoted Xi as saying.

The US president has already heaped taxes on $200 billion (€176 billion) of Chinese imports. Beijing has retaliated by slapping its own tariffs on imports from the US.

Trump and Xi to discuss Huawei

The dispute has already disrupted global supply chains and markets. Talks between US and Chinese officials over the tit-for-tat measures collapsed last month after 11 rounds of negotiations.

The trade dispute between China and the US includes a feud over Chinese technology firm Huawei, with Beijing fearing it could threaten the company's global growth.

The Trump administration has declared Huawei a security threat, effectively banning US companies from doing business with it.

The US has encouraged its allies to shun the firm in their 5G networks on security grounds, and has also suggested it could be a factor in a trade deal.

Trump said on Saturday that he had discussed Huawei with Xi and that resolving the issue would come later. US companies would still be able to sell components to Huawei, he added.

World leaders are gathering in Japan for what is expected to be a highly divisive G20 summit. Tensions over Iran and the long-running trade war between China and the US loom large over this year's meeting. (28.06.2019)