Twenty-five years ago, South America fulfilled its dream of a common market. It has had mixed success and its future is still uncertain, as the Mercosur members are now trading more with China than with each other. 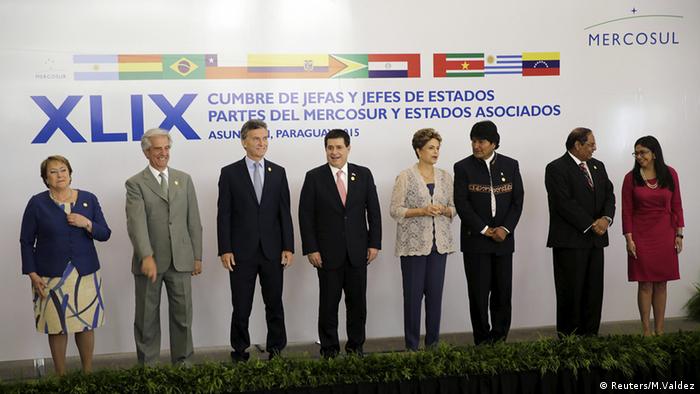 The South American family with the fine sounding name Mercosur is getting gussied up for its anniversary. The members have aged in the 25 years after the establishment of a common market, yet they are still hoping for rejuvenation.

A charm offensive is being led by Argentina's new president, Mauricio Macri. The conservative politician is one of the most visited government leaders in South America. In March, he received US President Barack Obama and in February, French President Francois Hollande and Italian Prime Minister Matteo had traveled to Buenos Aires as well.

"The EU is incredibly happy that Argentina is willing to resume negotiations on the free trade agreement between the two economic blocs," said Olaf Jacob, head of the Argentinian office of the German political foundation Konrad-Adenauer-Stiftung (KAS) in Buenos Aires. One of the goals set by President Mauricio Macri's government was to strengthen Mercosur.

On March 26 1991 in Asuncion, Argentina, Brazil, Paraguay and Uruguay signed the founding treaty of a common South American market based on the EU model. Since 1999, the bloc has been negotiating a free trade agreement with Brussels.

Negotiations have not been blessed with good fortune. The year-long disputes over European agricultural subsidies, South American isolation, the international financial crisis and Argentina's state bankruptcy of 2001 repeatedly sabotaged overtures by relatives on both sides of the Atlantic. 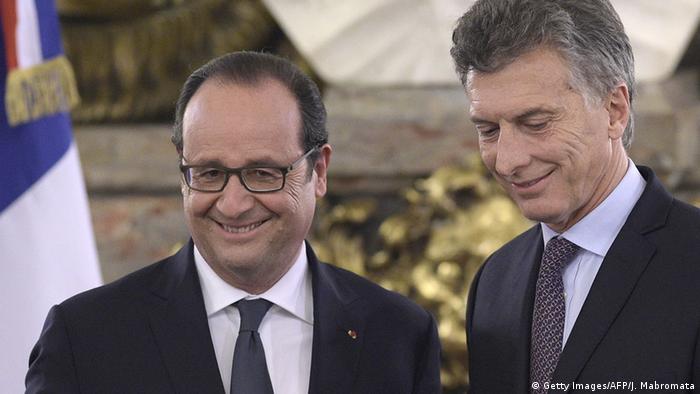 The clash of interests intensified when Venezuela joined Mercosur in 2012. "Mercosur was established to advance South American's integration in the world market," recalled Anna Marie Hoffmann from the GIGA Institute of Latin American Studies (ILAS) in Hamburg. "Brazil, Argentina and Venezuela promote the socio-political harmonization and strengthening of internal markets," explained Hoffmann.

Since the end of the era of Argentinian ex-presidents Nestor and Cristina Kirchner in November 2015, hope for a successful South American family reunification is growing. Exactly one month after Federica Mogherini, High Representative of the European Union for Foreign Affairs and Security Policy, visited Buenos Aires, EU and Mercosur representatives now aim to present free trade agreement proposals in Brussels on April 8.

Both regions are closely linked to each other economically, although on a low level. The exchange of goods between the two blocs came to a total of 110 billion euros in 2013. In 2014, it fell to 96 billion euros because of the economic crisis in several Mercosur member states.

The modesty of these figures can be demonstrated in a comparison of commercial relations between the largest Mercosur nation Brazil and China: The mere exchange of goods between the two countries in 2015 amounted to 67 billion dollars. 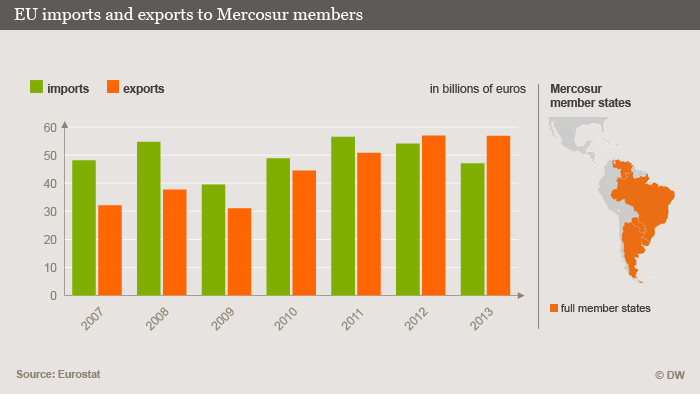 Mercosur members are not only looking for family support in Asia and Europe, they also take care of their relatives in Latin America. According to sources in the Uruguayan foreign ministry, a decision was made in early march to organize, "a high-level meeting" with members of the Pacific Alliance, in which Colombia, Peru, Mexico, Chile and Costa Rica are members.

"Argentina and other Mercosur members are looking towards the Pacific," confirmed KAS office head Olaf Jacobs. They would like to diversify their relations and reduce the growing dependency on China. Jacobs said, "Mercosur is another way of opening up, but not the only one."

Latin America expert Anne Marie Hoffmann believes that despite the political changes in Argentina, a free trade agreement between the EU and Mercosur will not be reached any time soon. Behind the carefully constructed façade, the Latin American group is crumbling.

"Until recently, Argentina was the inhibiting factor," said Hoffman and, "now the crises in Brazil and Venezuela are preventing an agreement within the economic bloc." He added, "I do not believe in a clear opening towards Europe in the near future."