Clear cutting in the rainforest has gone up 88% in June compared to the same time last year. The new government's push for more logging may, however, scuttle the new EU-Mercosur free-trade agreement. 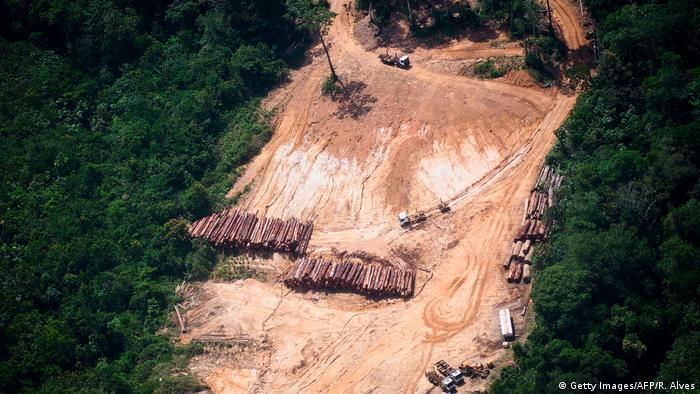 The Brazilian Space Agency has released data documenting a massive spike in deforestation in the Amazon rainforest. Citing figures from June, the agency registered an 88.4% increase over the same month in 2018.

That figure comes on the heels of increased deforestation in May, which was up 34% compared to 2018.

The agency measures annual July to July activity, but says the first 11 months of this year's report already show a 15% rise over the previous period.

Things getting far worse under Bolsonaro

Environmentalists have long been concerned about the steady loss of one of the world's largest sources of oxygen and carbon sequestration and their fears were compounded when far-right anti-environment candidate Jair Bolsonaro became president in January.

Bolsonaro has aggressively dismantled environmental laws and protections for indigenous people living in the Amazon in order to spur economic growth.

Much of the area being clear cut is converted for agricultural planting, such as soy beans and grains, as well as for ranching and mining. The need for such clear cutting has been fueled by the world's growing lust for meat as a dietary choice.

Soon to lose a space the size of Iran?

Bolsonaro has repeatedly criticized the country's Ibama environmental agency for what he complains are excessive fines against logging. He argues that fines simply drive up prices, making illegal logging more lucrative.

His son Flavio, who is a senator, has also pushed for legislation that would relieve farmers of the obligation of maintaining 20-80% tree cover on their land.

Bloomberg news agency reports that this could lead to the clearing of up to 1.6 million square kilometers of rain forest— a space roughly the size of Iran.

Threatening the environment and trade

Though the deforestation may provide short-term profits for Brazil and international companies it is bad news for the environment and could also threaten the passage of trade deals.

Last week, the European Union announced that after almost 20 years it had reached agreement with the Mercosur bloc —Argentina, Brazil, Paraguay, and Uruguay — on a new free-trade deal.

However, EU countries are adamant that all parties involved must uphold commitments to the Paris Agreement on climate change — these include a pledge to curb deforestation.

French President Emmanuel Macron has already said he will not sign the treaty if Brazil pulls out of the Paris accord, something that President Bolsonaro has threatened to do.

Observers, such as Paulo Adario, a forest strategist for the environmental group Greenpeace, say that although things will get worse under Bolsonaro, it could lead to policy changes for the better down the road.

Speaking of recent deforestation data, Adario said: "When they have the final numbers, if it is really a lot, it would be a nightmare for Bolsonaro. This is something that is really important from an international and Brazilian point of view because the Amazon is an icon."

This comes after the Brazilian government committed to end illegal deforestation at the UN climate summit in Glasgow.

The Austrian group AllRise says "crimes against nature are crimes against humanity" and estimates that heat caused by deforestation will result in 180,000 excess deaths this century.