Bolsonaro: Germany can learn 'a lot' from Brazil about environment

Brazil's president suggested Germany's love for coal disqualified it from lecturing Brazil about the deforestation of the Amazon. Angela Merkel said she would "talk straight" with him about the destruction. 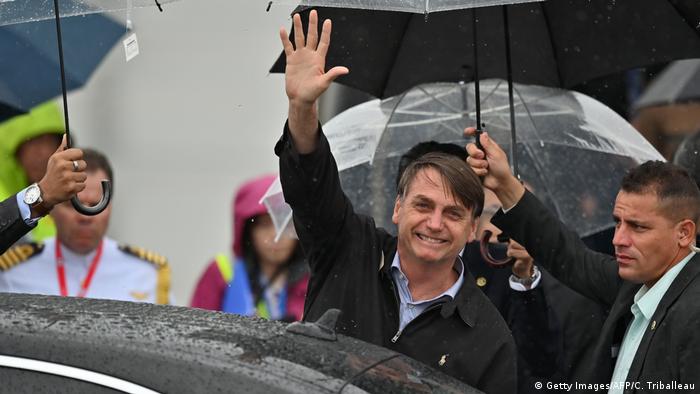 Brazil's far-right President Jair Bolsonaro said Germany has "a lot to learn" from Brazil's environmental policies, a day after German Chancellor Angela Merkel vowed to "talk straight" with him about the deforestation of the Amazon.

"Brazil can be an example for Germany even in the environment," Bolsonaro said after landing in Japan for a meeting with other leaders of the G20. "Their industry continues to be fossil, largely coal, and ours no, so they have a lot to learn from us."

Just over 5% of Brazil's energy is produced from coal, with renewables making up 43% of its energy mix. Germany draws nearly a third of its energy from coal — its most important source of electricity.

Bolsonaro to Merkel: Not with me

On Wednesday, Merkel told lawmakers in the German parliament that she would "make every effort to ensure that what is happening in Brazil no longer continues" in response to a question about the destruction of the Amazon rainforest.

Bolsonaro said he would not be like his predecessors who "came to be reprimanded by other countries" if Merkel discusses deforestation with him in Japan.

"We don't accept being treated like in the past," he said.

The rate of deforestation in the Amazon increased markedly since Bolsonaro entered office in January, according to conservation group Imazon. Preservation of the rainforest is a vital part of combating global warming.

Read more: Experts warn of Bolsonaro threat to the Amazon

Bolsonaro, a climate change skeptic, has said his government would refrain from expanding protected areas of the Amazon. That has won him support from Brazil's powerful farming industry.

In protest, more than 340 activist groups called earlier this month on the European Union to suspend decades-long talks with Brazil and other South American countries over a free trade deal.

Merkel said during the parliamentary debate on Wednesday that suspending trade talks "would not lead to one less hectare of deforestation in Brazil."

"Not concluding the deal is not the answer to what's happening."