Officials from Saudi Arabia, the United States and Iran allegedly cast doubt on UN scientists' findings and their recommendations at a UN meeting in western Germany. The climate talks ended with little progress made. 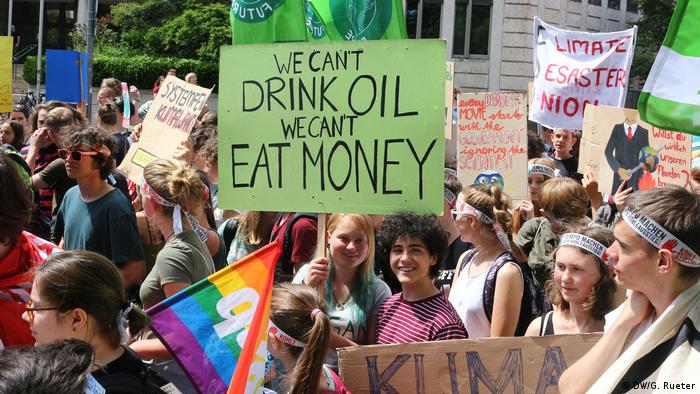 Environmental groups said Saudi Arabia, the United States and Iran were blocking progress on fulfilling the goals of the 2015 Paris climate accord, as a UN meeting on the landmark deal ended in the western German city of Bonn on Thursday.

Saudi and US delegates reportedly questioned scientific research by the UN's Intergovernmental Panel on Climate Change (IPCC) that found limiting global warming to 1.5 degrees Celsius (2.7 degrees Fahrenheit) would be safer than a 2.0-degree limit.

"Saudi Arabia is the main protagonist in this attack on science, although the US has come to its aid," Oxfam's Jan Kowalzig said.

The Saudi delegation also objected to including wording that welcomed the IPPC's findings or any mention of the scientific body's recommended emissions targets in a final text.

"Saudi Arabia, the US and Iran are forming an unholy alliance of science-deniers," Martin Kaiser of Greenpeace said.

The 2015 agreement had set an upper limit of 2.0 degrees and an aspirational limit of 1.5 degrees. IPCC scientists predict that the very worst effects of global warming would occur above the 2.0-degree limit.

"This report by the Intergovernmental Panel on Climate Change is so unambiguous in its message that any contradiction is irresponsible ignorance," Kaiser said.

The psychology behind climate inaction: How to beat the 'doom barrier'

No money for high risk countries

Talks since 2015 have focused on how governments can reduce their own greenhouse gas emissions to meet the global target. The technical meetings in Bonn were to prepare for a high-level UN climate summit in Chile later this year.

Delegates failed to make significant progress on "market mechanism" measures that allow countries to finance efforts to reduce emission in other countries while doing less themselves.

High-emission countries also clashed with others over how to compensate countries that are likely to experience the worst effects of global warming. The meeting ended with no agreement on how to raise the billions needed for a compensation fund.

"Are we keeping the promise we made in Paris of standing in solidarity with people facing climate emergency now?" said ActionAid's Harjeet Singh.

Chile's environment minister, who will preside at the UN summit in Santiago in December, urged the international community to take immediate action.

"We have been seeing all over the world what the effects of climate change are. It's not something that's going to happen in a 100 more years, it's something that we're seeing right now," Carolina Schmidt said.

The United Kingdom said Thursday that it was the first country to adopt a net zero emissions target by 2050 after Energy and Clean Growth Minister Chris Skidmore signed the pledge into law.

"Today we're leading the world yet again in becoming the first major economy to pass new laws to reduce emissions to net zero by 2050 while remaining committed to growing the economy," he said.