Envoys from 195 nations have approved a historic accord in Paris to slow global warming. Climate experts say implementation will be next challenge.

The accord agreed Saturday sets a target of limiting warming of the planet to "well below" 2.0 degrees Celsius (3.6 Fahrenheit) compared with the Industrial Revolution.

World leaders say the Paris agreement is the most ambitious since the climate initiaitve began in 1992.

German Chancellor Angela Merkel welcomed the deal as a sign of hope. "With today's adoption of the climate agreement the global community has for the first time committed itself to the fight against global climate change," Merkel said in Berlin. "Paris will always be connected with this historic turning point in climate policy."

US President Barack Obama called the agreement "historic" and said it represented a pragmatic chance at reversing centuries of damage.

"This agreement represents the best chance we have to save the one planet that we've got," Obama said.

Green groups said they hope this would lead to the planet turning away from its reliance on fossil fuels and continued momentum to tackle climate change.

"This deal alone won't dig us out the hole we're in, but it makes the sides less steep," Greenpeace International chief Kumi Naidoo said.

Retooling energy production from dirty coal, oil and gas to renewable like solar and wind will require investment.

At issue was who would pay for it. Richer countries have agreed to muster at least $100 billion (92 billion euros) a year from 2020 to help developing nations. 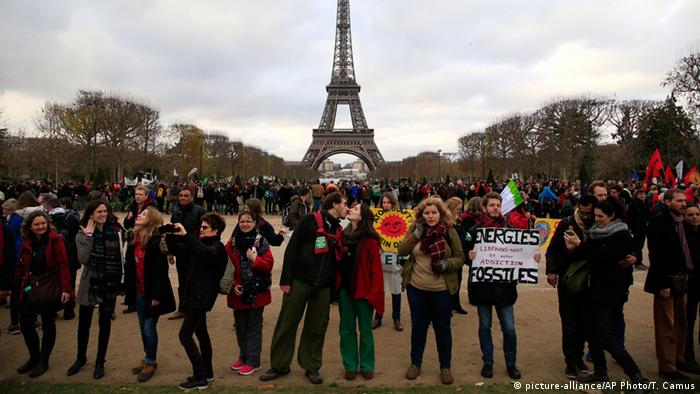 Environmental and human rights groups say they will continue to push for populations threatened by rising seas and increasing droughts and floods.

But even as world leaders delivered glowing platitudes and backslapping, climate scientists say that, even if the pledges are fully honored, earth will still likely be on track for temperatures exceeding safe limits.

"The diplomats have done their job: the Paris Agreement points the world in the right direction, and with sophistication and clarity," said Jeffrey Sachs, director of The Earth Institute at Columbia University in New York. "It does not, however, ensure implementation, which

That view was echoed by Hans Joachim Schellnhuber, director of the Potsdam Institute for Climate Impact Research as he weighed the prospects for the planet to reach the 1.5 degree Celsius target.

"It will be up to business, consumers, citizens and particularly investors to finish the job," Schellnhuber said.

"It means that in the end, you have to phase out carbon dioxide," Schellnhube said.