A global climate summit has ended in Poland with an agreement on how the 2015 Paris climate accord will be implemented. However, countries could not even agree to 'welcome' the findings of the IPCC report. 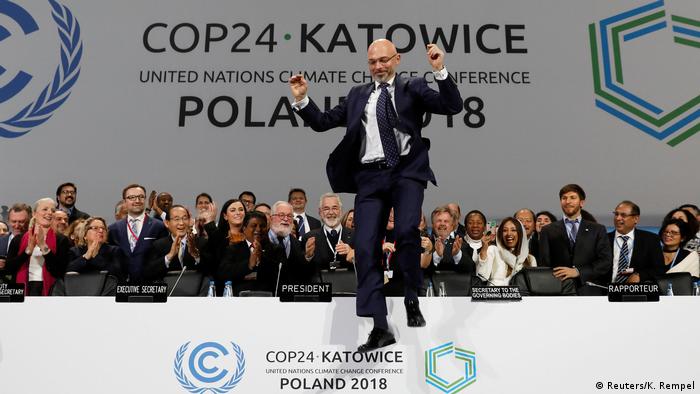 Almost 200 countries on Saturday reached an agreement on implementing the Paris Climate Accord after two weeks of negotiations under the auspices of the United Nations.

The result of the tortured negotiations in the Polish city of Katowice is a 156-page rulebook on how countries will report and monitor their national pledges to curb greenhouse gas emissions and update their emissions plans.

The document covers a wide gamut of topics, but some key points of the deal include:

Read more: COP24: Frustration and hope in the fight against climate change

Points where nations struggled to find common ground include:

"It is not easy to find agreement on a deal so specific and technical. Through this package you have made a thousand little steps forward together. You can feel proud," Polish president of the talks Michal Kurtyka told delegates. "We will all have to give in order to gain," he said. "We will all have to be courageous to look into the future and make yet another step for the sake of humanity."

Climate change action groups said the agreement was a good start but it showed a lack of urgency among nations.

Executive director of Greenpeace Jennifer Morgan said: "We continue to witness an irresponsible divide between the vulnerable island states and impoverished countries pitted against those who would block climate action or who are immorally failing to act fast enough."

Alden Meyer of the Union of Concerned Scientists said: "While some rulebook elements still need to be fleshed out, it is a foundation for strengthening the Paris Agreement and could help facilitate US re-entry into the Paris Agreement by a future presidential administration."

How bad is the situation? The IPCC report that caused so much division at the negotiations found that to keep warming capped at 1.5 degrees there needs to be a dramatic overhaul of the global economy, including a shift away from fossil fuels. It warned that if the world warmed to even 2 degrees above pre-industrial levels, hundreds of millions of people would face dangerous climate-related risks by 2050, and 99 percent of the world's coral reefs would be wiped out. Greenhouse gas emissions need to drop by about 60 percent from current levels by 2030 to stay on a 1.5-degree path.

As the UN climate conference wraps up, Asia’s emission-producing economic powerhouses have said that their growing wealth doesn’t guarantee that they can fully comply with the Paris Agreement without assistance. (15.12.2018)

Can Europe go carbon neutral by 2050?

The EU wants to become carbon neutral by 2050. That means abandoning coal, oil and gas completely. But is it possible? Experts say it is, energy won't become more expensive and it will even create more jobs. (13.12.2018)