The difficult task of tracking deadly wood | Environment | All topics from climate change to conservation | DW | 01.12.2017

Logging is a cause of murder in the Amazon rainforest. And a Greenpeace report has shown that European companies still buy wood that comes from blood-stained sources. 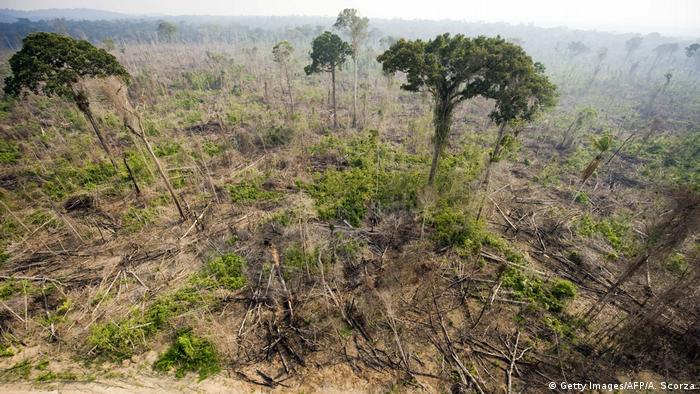 In the Amazon, the world’s biggest rainforest, clashes between local people and loggers are not rare events. With almost 400 billion individual trees, the rainforest is a juicy target. And Brazil, which is home to nearly two-thirds of the Amazon rainforest, is particularly under threat.

For example, back in April, four armed men tortured and murdered nine people in the western state of Mato Grosso, Brazil. According to authorities, Valdelir Joao de Souza, an owner of lumber companies, was resposible.

But, even while Souza was on the run, his company Madereira Cedroarana continued to export timber to the United States, Canada, France, Belgium, Denmark, Italy, Germany, Netherlands and Japan, Greenpeace has shown in a recent report.

Europe has strong legislations in place against illegal logging as well as several policies to certify legal timber - but the Souza case shows that there are still challenges when it comes to tracking down blood-stained products. 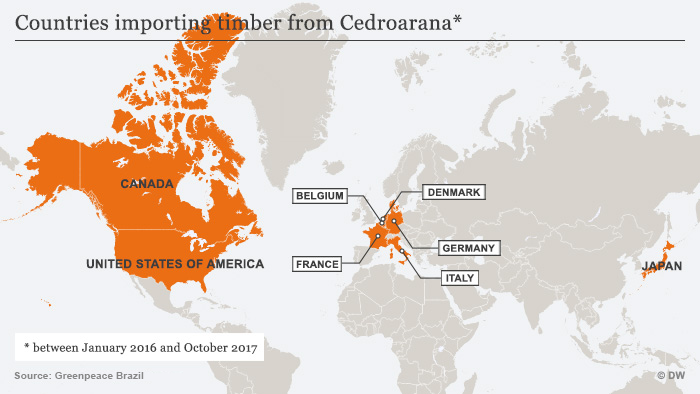 In the last decade, at least 251 people were killed in the Amazon - most of them due to illegal logging, land grabbing and illegal mining, Romulo Batista, forest campaigner with Greenpeace Brazil, told DW.

According to the Pastoral Land Commission (CPT), a catholic group monitoring violence in Brazil, the Rondonia state - which borders Mato Grosso - is the deadliest for land conflicts, accounting for 21 out of the 61 killings in 2016.

“We want to highlight that timber from the Amazon is often not only linked to illegal logging, which destroys the forest and opens the gate for deforestation, but also to violence,” Romulo said.

Campaigners believe stronger regulation and further cross-border collaboration are needed to put an end to the deadly situation. In the case of the massacre of Mato Grosso, European companies continued to trade with Souza’s sawmills, even after he was accused. Foreign companies are therefore equally responsible, Greenpeace points out. 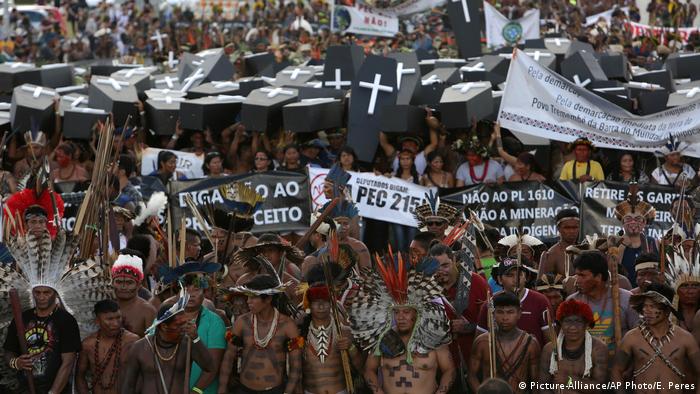 The EUTR prohibits the placing of illegally harvested timber and selling products on the EU market. Legal timber should have been produced respecting the laws of the country where it is harvested. “But irregularities might always happen,” Van Brusselen added.

Greenpeace emphasizes the many existing ways for a company to trade illegal timber - mostly by obtaining fraudulent timber credits and transport documents.

In the case of Madereira Cedroarana, the legal framework gets even more complicated - while Souza is being prosecuted, his companies aren’t. According to information DW accessed, companies are using this loophole as a backup.

The German company Gunreben was one of the many named in the report. However, they never had direct contact with the Brazilian company, representatives told DW. Instead, they worked with the intermediary company GWP and received complete EUTR documents along with each shipment.

GWP stated that they have not found any irregularities related to the Madereira Cedroarana. Moreover, they pointed out that they lack “access to civil disputes or criminal lawsuits or the bad behavior of employees of the company - this is the responsibility of local law enforcement.”

But Greenpeace insists that there is no excuse for ignorance.

Since 2007, Cedroarana has accumulated nearly 150,000 Euros of unpaid federal fines for stocking and trading illegal timber, according to the Brazilian Institute of the Environment and Renewable Natural Resources.

“If you want more certainty about the legality of what you buy as a consumer, you could buy certified wood which ensures legality and sustainability from the forest to the consumer,” Van Brusselen said.

The Forest Stewardship Council (FSC) is one of the best acknowledged worldwide certification programs. There are strict guidelines for products to be given their seal.

Even so, it can still be difficult to detect illegal logging, Kim Carstensen, director general of FSC International, told DW. “This can become even more difficult in regions where bureaucratic processes slow down certain procedures, or where regulatory measures are not clearly defined or interpreted,” he said.

Having absolute control over the whole process, from harvesting in the

Amazon, to selling in Europe, remains a huge challenge, due to a long list of middle persons and potential frauds, Van Brusselen said.

While many Gunreben products are FSC-certified, it was not the case of the wood coming from Cedroarana - the German association of timber trade (GD Holz) was responsible for that certification.

GD Holz told DW that as soon as the Brazilian authorities officially relate the criminal acts with the timber trade, imports from Madereira Cedroarana will lose legal status and, therefore, they will no longer support them.

Since irregularities end up happening often when it comes to timber from the Brazilian Amazon, Greenpeace is urging governments, companies and consumers to pay close attention.

“The first thing we want is to increase the pressure on the state and federal government in Brazil to change the system and show that there is no space for illegal logging,” Batista said.

At the same time, EU competent authorities and European companies are asked to intensify their efforts to track down the legality and sustainability of timber.

For consumers, the responsibility relies on making pressure on the companies and governmental authorities.

Joint efforts is the only way for this deadly situation to come to an end, Batista said.

“It is crucial to end blood stained timber around the world - the Amazon forest is asking for peace,” he concluded.

Around 50 activists have tried to force their way past security to sabotage logging operations in the Hambacher Forst woods near Aachen. Footage shows police forces using pepper spray to displace the protesters. (27.11.2017)