Could Brazil′s new ambassador to the US be a Bolsonaro? | Americas| North and South American news impacting on Europe | DW | 18.07.2019

Could Brazil's new ambassador to the US be a Bolsonaro?

Brazil's President Jair Bolsonaro intends to nominate his son Eduardo for the country's most important diplomatic post: ambassador to the US. Will burger-flipping skills be enough to override nepotism concerns? 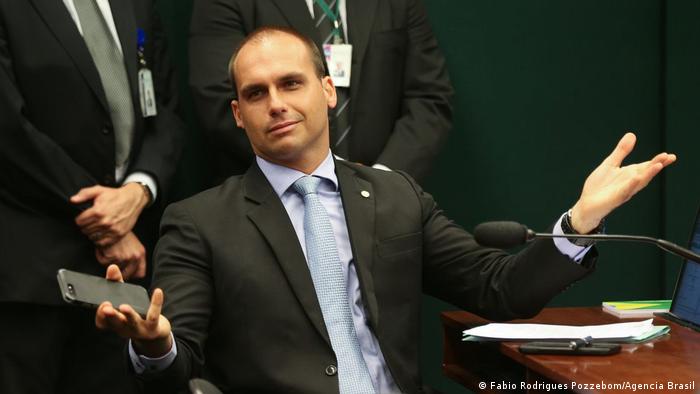 Last week, President Jair Bolsonaro was ready with the punchlines in Brazil. Many of the national media outlets he dislikes were mocking his controversial plan to nominate Eduardo, his third-oldest son, as ambassador to the US.

"If he's getting criticized like that," Bolsonaro said of his son, "then he must be the right person for the job." 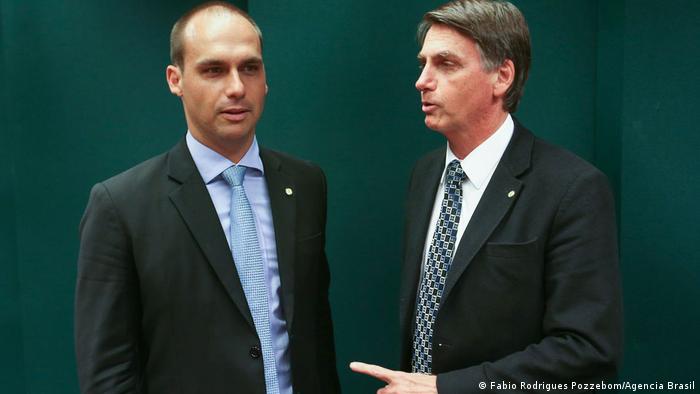 Jair Bolsonaro (right), president of Brazil, would like to nominate his third-oldest son, Eduardo (left), for the position of Brazil's ambassador to the US

Last year, Eduardo Bolsonaro was reelected to the Chamber of Deputies, Brazil's lower house, with a national record of nearly 2 million votes. He considers himself qualified for the ambassadorship. "I'm president of the [congressional] foreign affairs commission. I did a foreign exchange program, and I fried hamburgers in the US," he said.

Brazil's US Embassy has historically been staffed by long-serving top diplomats. The possibility that a lawyer and career politician may be sent instead has experts drawing comparisons to places like Saudi Arabia and Uzbekistan. The move is not winning any friends in Europe.

"For European countries, it would be unthinkable for a president to trust his son with an important assignment. And there's no more important ambassador for Brazil than the one in Washington," Thomas Jäger, a political scientist at the University of Cologne, told DW. "It's not a matter of loyalty and trust, but of nepotism and a lack of transparency."

In a video, Eduardo Bolsonaro listed his close ties to US President Donald Trump as one of his areas of relevant expertise. Bolsonaro's potential nomination by his father has parallels to Trump naming his son-in-law Jared Kushner as a senior White House adviser. Trump's move had raised the question of possibly violating a 1967 US anti-nepotism law, but was found to be legal. 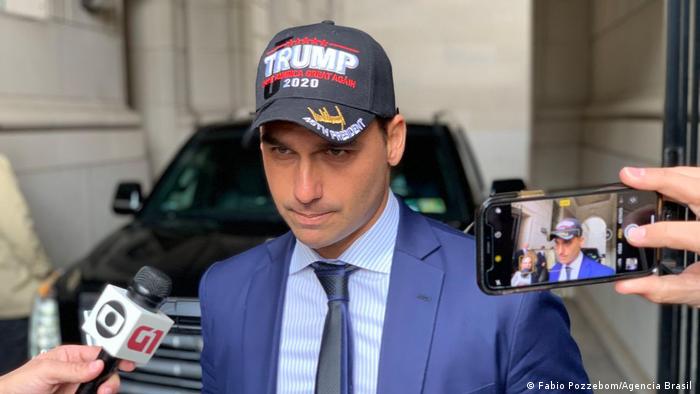 Eduardo Bolsonaro has touted his alleged closeness with Donald Trump

Nepotism has a long tradition in Brazil's political history. Its Ministry of Foreign Affairs has been the exception, however, taking pride in its highly trained diplomats. The embassy in the US has held a particularly lofty stature.

"This potential appointment is absurd," Senator Angelo Coronel told DW. "Sending someone without experience to the US just because he knows Trump and can fry hamburgers: It's an insult to the Foreign Ministry."

Government authorities in Brazil are currently looking into whether the nomination would even be legal, though their findings may end up in Bolsonaro's favor. Supreme Court Justice Marco Aurelio Mello has already called it a form of nepotism.

Senator Coronel is hoping the president will not follow through on his intent. "It may not be illegal," the senator said. "But it's amoral." 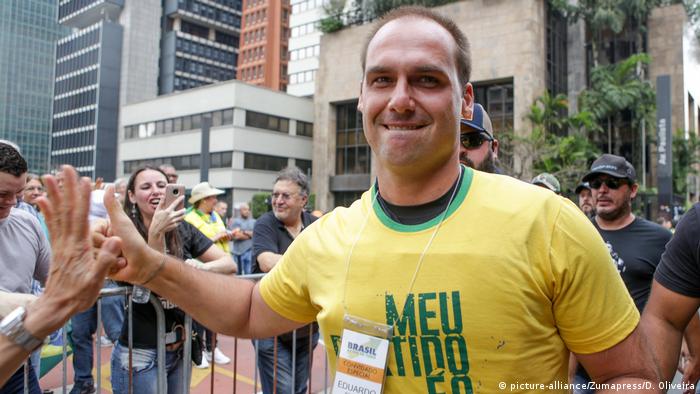 Eduardo Bolsonaro's potential nomination has caused a stir outside Brazil, too, not least because of his ties to Steve Bannon, an ex-Trump adviser and leader of the self-described "alt-right" movement, which mixes populism with anti-Semitism, racism and white supremacy. Last year Bannon declared Eduardo Bolsonaro the movement's representative in South America.

"This appointment would only increase the skepticism repeatedly expressed in Europe of Brazil's democratic development," Jäger said. "It supports the perception that democratic norms are on-paper only, not in spirit, thus over time undermining the government's democratic legitimacy."

The apparent Trump-Bolsonaro family bond has European leaders concerned, he added. "The closer you get to the Trump-USA brand, the further away you drift from Europe. That's key. So for Europe, a stronger Brasilia-Washington alliance is bad news."

Jäger said that Europeans are holding out hope that Brazil won't blindly follow Trump's lead, as it already has on climate change. "But it's a fact that Europe considers both American and Brazilian democracies in danger."

Alexander Schmotz, political scientist at Berlin's Humboldt University, agrees. "Brazil is a country that's seen its democratic institutions and norms slowly eroded in the last several years," he said. "We call that democratic backsliding. The appointment of the ambassador in Washington plays a smaller role in that, however; it fits the bill, but will be less consequential."

If President Bolsonaro follows through and nominates his son as ambassador, the Senate will need to approve the measure. The US will also need to accept Eduardo Bolsonaro as Brazil's new man in Washington. That, at least, shouldn't be an issue — if Eduardo's buddy status with Trump is as strong as claimed.

Brazil's president, Jair Bolsonaro, described as the "Trump of the Tropics," has received warm praise from the US original, Donald. At a meeting in Washington, the two men announced a new, special relationship. (19.03.2019)

Already dogged by corruption allegations, Flavio Bolsonaro, the son of President Jair Bolsonaro, is now accused of having ties to death squads. Could the scandal derail the plans of Brazil's far-right political family? (24.01.2019)