The Brazilian president has been coming under increasing pressure as European leaders criticize his environmental policies. Wildfires continue to rage in the Amazon rainforest. 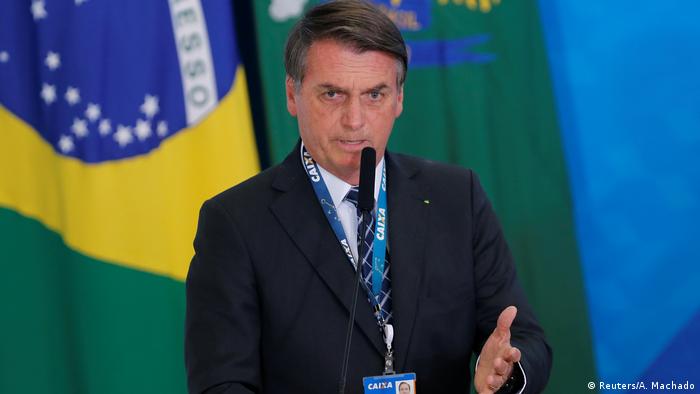 Brazilian President Jair Bolsonaro on Friday promised to send in troops to fight wildfires in the country's Amazon rainforest, blaming dry weather for this year's spike in outbreaks.

Bolsonaro said his government was very aware of the situation and would fight "environmental crime" the same way it combats other types of crime, amid accusations that he had turned a blind eye to illegal deforestation by farmers and land-grabbers in the region.

The military will "act strongly" to control the blazes, the president promised, as he signed the decree that states the armed forces will collaborate with public security and environmental protection agencies.

"The protection of the forest is our duty," he said. "We are aware of that and will act to combat deforestation and criminal activities that put people at risk in the Amazon."

Fires are a regular occurrence during the yearly dry season but environmentalists blamed this year's spike on farmers increasingly clearing land for pasture.

Bolsonaro's reaction came as international criticism mounted  over his failure to protect the Amazon, nicknamed "the lungs of the planet." The 64-year-old had previously described rainforest protections as an obstacle to Brazil's economic development.

On the eve of the G-7 summit in Biarritz, France, world leaders agreed that the environmental crisis must take precedence on the agenda, with Bolsonaro's governance coming under increasing scrutiny.

Germany, France and Ireland on Friday threatened to tear up a European Union trade deal with the South American Mercosur group of countries because of Brazil's policies in regards to the Amazon.

The Irish leader, Leo Varadkar, described Bolsonaro's attempt earlier this week to blame the fires on environmental groups — without evidence — as "Orwellian."

However, the Brazilian head of state retorted that the blazes in northern Brazil should not be a "pretext" for international sanctions.

Meanwhile, US President Donald Trump said his country was on standby to help, should Brazil require it. Trump tweeted after speaking with his Brazilian counterpart: "If the United States can help with the Amazon rainforest fires, we stand ready to assist."

World leaders were not alone in reacting to Bolsonaro's approach to the wildfires. Raoni Metuktire, a leading campaigner against deforestation in the Amazon and chief of the Kayapo people, condemned the Brazilian president.

"He wants to finish with the forest, with us. It's really terrible what he does," Raoni told AFP by telephone from Germany, accusing Bolsonaro of emboldening farmers, loggers and miners. "We have to get him out soon."