The Amazon rainforest is on fire and it's all Bolsonaro's fault. The world is outraged, but that's not going far enough. The global community will have to pay up to save this vital ecosystem, says DW's Vanessa Fischer. 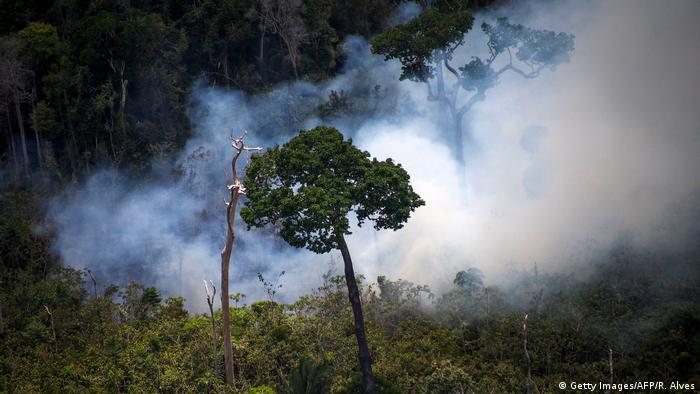 The Amazon rainforest, one of the most important ecosystems in the world, is burning on a scale we've not witnessed for years. Brazilian President Jair Bolsonaro has been the focus of the international criticism. His aggressive rhetoric has emboldened people to pick up arms, start fires and generally take the law into their own hands. He peddles conspiracy theories, sacks reputable scholars when he dislikes their research, and takes offense to other nations commenting on Brazilian affairs.

This criticism is justified, but is Bolsonaro's rhetoric really a surprise? What else should we expect from a far-right populist like him? The more tensions rise and outrage increases, the more reluctant the Brazilian government grows to engage in dialogue. This cannot be in the interest of the global community.

What does the rest of the world want to do besides express outrage and share tweets with the hashtag #PrayForTheAmazon?

An ecosystem under threat

Many parts of the Amazon are now on fire, but the forest's destruction of began long ago and has continued to this day. This destruction is not just land reclamation for agriculture, cattle and soybean cultivation. The number of illegal goldmines has been increasing for years. That's in addition to the gargantuan dams constructed in the Amazon basin over the past decade. There are plans to build over 20 of them by 2023. These are, incidentally, construction projects that were signed off on when left-wing President Luiz Ignacio Lula da Silva was still in power — despite their questionable energy efficiency and their massive impact on the ecosystem. Large areas of land must be flooded to build them, creating water reservoirs that — thanks to the tropical climate — become giant pools of decomposing biomass. The result is methane gas, which is even more harmful to the environment than carbon dioxide.

In 2012 I visited a newly built dam on the Madeira River and saw the early environmental ramifications of these structures firsthand. The dam is located in the city of Porto Velho, the capital of the state of Rondonia and a stronghold for Brazil's agriculture lobby. The Madeira River is one of the Amazon's most nutrient-rich tributaries, carrying sediment from the Andes. When the river was dammed, it flooded the city. Since then, things have only gotten worse — today planes don't even land there because pilots can't see through the dense smoke plumes created by the forest fires.

A financial commitment to help

Imposing sanctions on Brazil to stop the destruction of the Amazon rainforest won't do anything. On the contrary: Withholding funds for climate and forest protection initiatives — as Germany and Norway have announced they will do — plays into the hands of the Brazilian government and agriculture lobby. It also makes life even harder for those people on the ground working to protect the Amazon. They can't rely on the government for help. Public funds for climate protection and environmental measures were reduced significantly last year.

The international community must provide even more money to save the Amazon rainforest in the long term. That means a global fund, compensation payments and a global commitment to not prioritize economic interests in the Amazon. The upcoming UN summit in September in New York, where climate change will be at the top of the agenda, would be the ideal setting to agree on such steps. It would be an opportunity for the global community to show that it can really take action, not just express outrage.

Forest fires are surging in Brazil, with thousands being recorded this week alone. Scientist Carlos Nobre from Sao Paolo University says politics is to blame for the alarming increase. (21.08.2019)

Russia: Children killed in shooting at school in Izhevsk 1h ago

Cardinal, 5 others on trial over Hong Kong protest fund 2h ago