TÜV Süd had certified the structure shortly before it collapsed in January, leaving 270 dead. Faced with a number of lawsuits, the company has now put a figure on the extent of its potential liability. 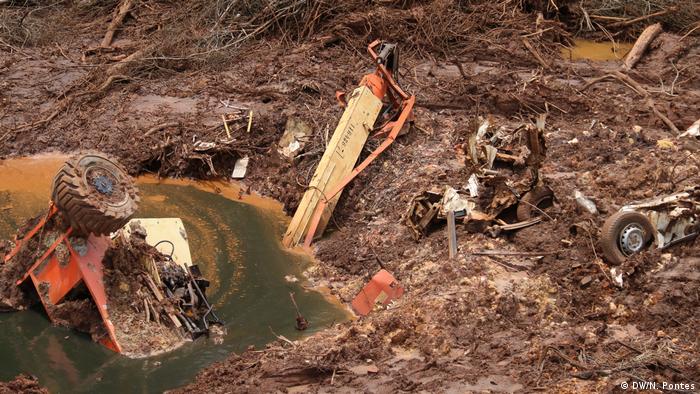 The German industrial inspection company that vetted a dam in Brazil before it collapsed in January has set aside around €100 million ($111 million) to cover potential compensation claims.

TÜV Süd faces lawsuits in Brazil alleging that it knew about the risks that the structure — a pile of mining waste called a tailings dam — could give way.

The dam collapsed suddenly in January in a process known as liquefaction, which the German firm had been responsible for monitoring. Two hundred and seventy people were killed when the town of Brumadinho was flooded with mud and toxic material from the dam.

The firm's annual report reveals the possible scale of damages if it is found to have been negligent, while warning that the costs are practically impossible to predict while investigations and legal processes continue.

What was TÜV Süd's role?

The company had issued a safety certificate for the dam in September 2018. After the accident, employees were briefly arrested and subsequently released. Individual employees are under investigation by Brazilian criminal and labor authorities according to the annual report.

In an emailed statement, a spokesperson for TÜV Süd told DW the safety certificate "was a description of the condition of the dam at the time it was sent," and that it was accompanied by a comprehensive report warning the mine operator not to drill, use heavy machinery or carry out detonations in the vicinity of the dam.

Internal emails between TÜV Süd staff, extracts of which were published as part of a BBC investigation last month, show employees discussing fears over the dam's stability as they considered whether to grant a safety certificate.

"We're finishing the studies about liquefaction of the dam B1, but everything points that it won't pass," reads one email dated May 2018. Another message from November stated: "This dam has a liquefaction problem."

In May, a Brazilian judge pre-emptively froze 60 million reals (€13 million; $15 million) of the company’s assets and banned it from carrying out further inspections in the country.

Vale SA, the iron ore mining company that operated the dam, has already been convicted and ordered to pay damages. A court ordered the freezing of 11 billion reals of Vale's assets earlier this month.

TÜV Süd is one of three unconnected companies bearing the TÜV acronym, which stands for Technischer Überwachungsverein (Technical Inspection Association).

In Germany, the companies are a household name. TÜV safety certificates can be seen on a wide range of products and machinery, from lifts to consumer goods.