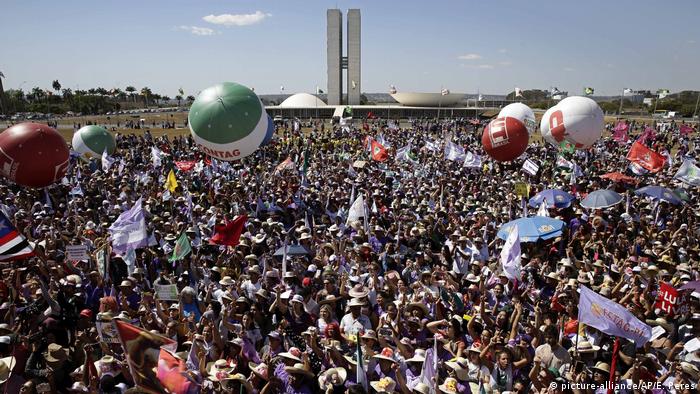 Tens of thousands of women took to the streets of Brazil's capital of Brasilia on Wednesday to denounce the policies of President Jair Bolsonaro. The demonstration was the third anti-government protest in the city in two days.

Organizers said 100,000 people had participated in the demonstrations, while police said the figure was closer to 20,000. In either case, it would be the largest protest to take place in Brasilia since Bolsonaro was elected in January.

The protest followed a large gathering of indigenous women that took place on Tuesday. They traveled to the capital to express their outrage at what they called Bolsonaro's "genocidal policies" against indigenous people, as well as the government's wish to open up indigenous territory to mining.

Carrying bows, arrows and spears, the indigenous women marched toward the Congress, holding a banner that read "resist in order to exist." 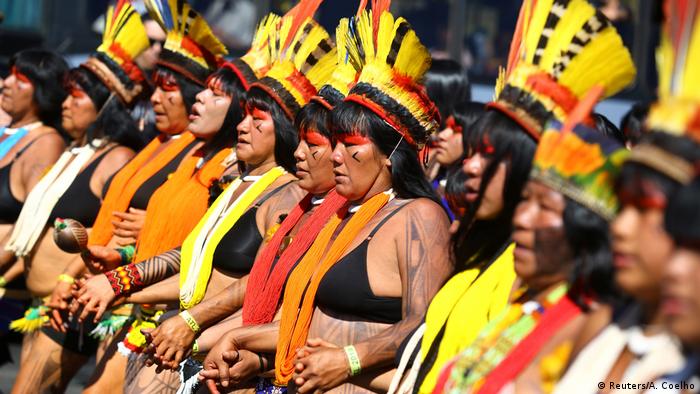 On Wednesday, the indigenous women joined the day's demonstrations dubbed the "March of the Margaridas."

The protest event is held every four years and is named after Brazilian trade union leader Margarida Maria Alves, who was murdered in 1983 during the military dictatorship.

At the march, women denounced a wide range of issues relating to Bolsonaro's tenure, from rampant deforestation in the Amazon rain forest and education cuts to the culture of misogyny and machismo that plagues the country.

Protesters called the Brazilian president "misogynist, racist and homophobic." The group also demanded the release of left-wing leader and former president Luiz Inacio "Lula" da Silva, who has been in jail on corruption charges.

Bolsonaro has been under fire both at home and abroad on all of these issues. In particular, evidence of accelerated deforestation during his presidency drew wide condemnation from international NGOs and criticism from governments across the globe.

The far-right president boasted the approval of 55% of Brazilians when he came into office, but he has seen that support wane, as several polls currently put his approval rating at 30%.

Brazil's top court has blocked the Bolsonaro government from investigating US journalist Glenn Greenwald. In the last two months, Greenwald has published a series of damning articles about Brazil's justice minister. (10.08.2019)

Indigenous communities in Brazil protest threats to land and services

Leaders of 300 groups across Brazil are protesting changes imposed by far-right President Jair Bolsonaro. They fear a loss of rights, and land to the interests of miners and large-scale agri-business. (26.04.2019)