President Jair Bolsonaro has dismissed the importance of German funding for forest and biodiversity projects in Brazil. "They can use this money as they see fit. Brazil doesn't need it," he said. 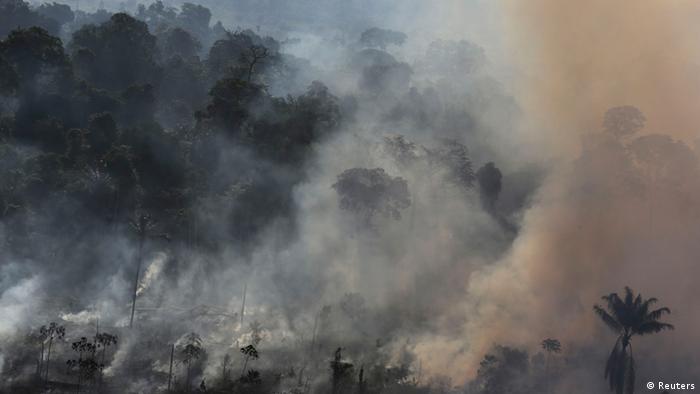 Brazilian President Jair Bolsonaro has said his country has "no need" for German money aimed at supporting conservation projects in Brazil. "They can use this money as they see fit. Brazil doesn't need it," Bolsonaro told journalists in Brasilia on Sunday.

His comments come after German media reported that Berlin was considering withdrawing the funding.

Quoting Environment Minister Svenja Schulze, German daily Tagesspiegel reported Saturday that the German government was planning to stop sending money to a country that is not fully committed to curbing deforestation in the Amazon rainforest. Brazilian media outlets reported that Germany had decided to suspend €35 million ($39 million) in funds.

Read more: Bolsonaro: Germany can learn 'a lot' from Brazil about environment

Brazil is home to more than 60% of the Amazon rainforest, which is being cleared at an increasing rate to create more cropland. The Amazon is vital to the exchange of oxygen for carbon dioxide in the atmosphere — an important check on global warming.

But concern about the forest has grown since Bolsonaro took office in January.

The move to suspend the funding reflects "great concerns with an increasing deforestation in the Brazilian Amazon," the German embassy in Brazil told the Folha de S.Paulo newspaper on Saturday.

According to O Globo newspaper, the decision concerns only funds for new projects financed by the Ministry of Environment.

Brazil's national space research agency said Tuesday that roughly 2,254 square kilometers (870 square miles) of the Amazon were cleared in July, a spike of 278% from a year earlier. But the Brazilian government has claimed the data is unreliable and misleading.

"The policy of the Brazilian government in the Amazon raises doubts as to whether a consistent reduction of deforestation rates is still being pursued," Germany's Schulze told Tagesspiegel.

Bolsonaro doesn't intend to designate any further conservation areas in the forest, and has instead pledged to allow more clearances and make more economic use of the Amazon region. The former military officer has also scorned any advice from abroad.

Germany, nonetheless, plans to continue supporting the Amazon Fund, which was created in 2008 to receive donations to help prevent, monitor and combat deforestation in the Amazon. Germany is one of the fund's three main contributors.

The Bolsonaro administration, which maintains close ties to the agribusiness sector, has questioned the efficiency of the Amazon Fund.