A DW column that accused Brazil of turning its landscape into "an inferno" has infuriated the country's environment minister. He said the description should instead be applied to Nazi Germany's mass murder of Jews. 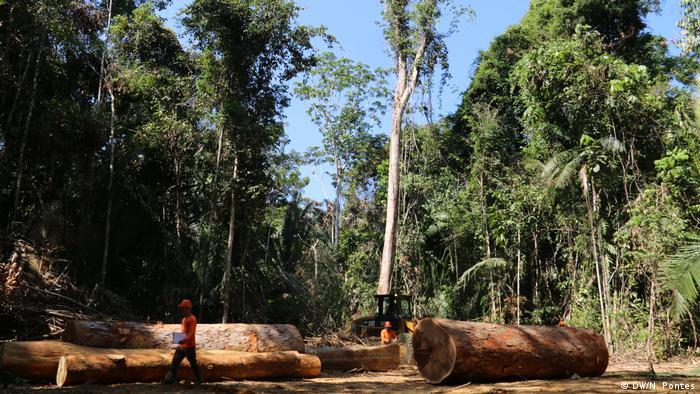 The column by Rio-based German journalist Philipp Lichterbeck said the new Bolsonaro-led government was bent on turning the country's landscape into "an inferno of soy, pastureland, agrochemicals, sugarcane and mining industry."

The destruction of the environment "seems to be one of the main projects" of the new leadership, Lichterbeck wrote. "These are people who act and speak with arrogance and cruelty .... who laugh when a 7-year-old dies. They celebrate when police commit massacres in slums, when environmentalists or black councilmen die."

The text, titled "The project of Mephistopheles" and first published on DW's Portuguese site, provoked an angry response from Salles, who tweeted that the description of Brazil "is more akin to what Germany itself did to Jewish children, and to many millions of others who were tortured and killed in their concentration camps."

"It is unfortunate that a German public channel writes this about Brazil," Salles wrote.

The tweet has been shared more than 2,000 times and has received more than 3,000 comments from Salles' followers. Some Twitter users argued the minister's reference to Nazism was disproportionate, and that he risked offending the entire German population because of one opinion column.

In his commentary, Lichterbeck accuses right-wing populist President Jair Bolsonaro of seeking to curtail the powers of environmental agency IBAMA, which polices deforestation in the Amazon. He also described Salles as someone who could have featured in George Orwell's 1984, "in which the 'Ministry of Peace' is responsible for organizing the war. Because in Brazil, the minister is not interested in protecting the environment, but in exploiting it."

Read more: Experts warn of Bolsonaro threat to the Amazon

What Salles had to say

When approached for comment, Salles told DW it was "unacceptable" that a public broadcaster could allow the publication of content that is so "gratuitous," "aggressive" and "offensive."

He added that the commentary "was not a criticism of environmental policy."

"It is a pure and simple offense, attacking people, attacking in a certain way the Brazilian government as a whole, it was not an environmental criticism," Salles told DW.

Lichterbeck: Brazil never been able to distance itself from its dictatorship

Following the controversial response to his column, Lichterbeck said the minister had failed to address points raised "about a policy that is anti-environmental," but instead "preferred to talk about the German past."

"Nazism was defeated more than 70 years ago," the journalist told DW. "What exists today in Germany is a strong tendency to warn of undemocratic regimes, regimes that often violate human rights, preach aggressive nationalism, and create internal enemies.

"Brazil, on the contrary, has never been able to distance itself from its dictatorship," the columnist added. "I am accused of portraying Brazil in a manipulative and negative way when I talk about the setbacks in environmental policy, which, according to many experts, is happening."

Some revelers view this year's Carnival as a way to push back against President Bolsonaro, who is known for his homophobic and sexist remarks. Samba schools will also highlight minority communities in their performances. (02.03.2019)

With right-wing populist Jair Bolsonaro in power in Brazil, many artists fear for democratic values in the country. Helio Fervenza spoke to DW about censorship, responsibility and the specter of dictatorship. (04.03.2019)

Belarus: Over 100,000 protest against Lukashenko ahead of strike ultimatum 5m ago

'Stowaway' incident on oil tanker off coast of England 2h ago