Indigenous communities in Brazil protest threats to land and services

Leaders of 300 groups across Brazil are protesting changes imposed by far-right President Jair Bolsonaro. They fear a loss of rights, and land to the interests of miners and large-scale agri-business. 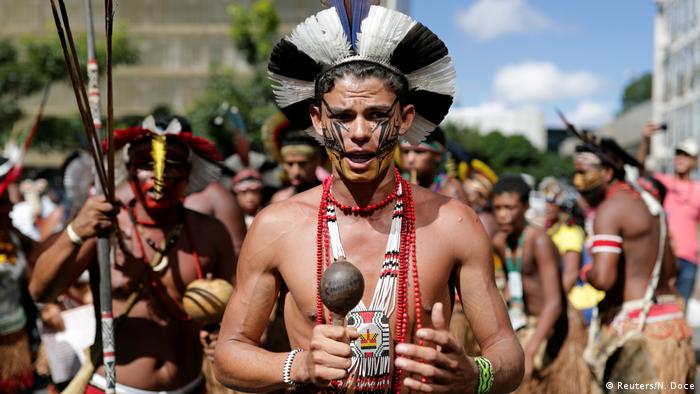 People from indigenous communities across Brazil walked down the capital Brasilia's main avenue towards the congressional building on Friday.

The march is part of a three-day annual event known as the Free Land Encampment.

Their concerns have zeroed in on the new president's administrative changes which they say will open up vast areas of territory including the Amazon rainforest and indigenous reserves to mining and industrial farming.

In an open letter published by the French daily Le Monde earlier this month, indigenous groups across the world expressed concerns about the plans of Brazil's far-right president: "Today we are particularly concerned about the situation in Brazil, since the election of the new President Jair Bolsonaro. For 100 days we have been living the first stages of an apocalypse, in which indigenous people are the first victims." 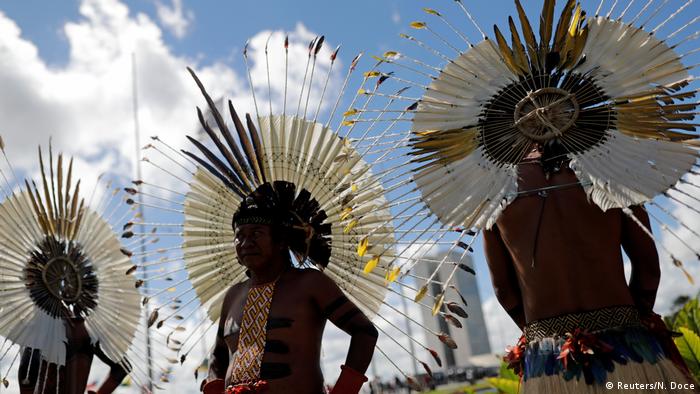 Land and rights are under threat, according to the indigenous groups

That sentiment was echoed on the streets of Brasilia during the three-day encampment organized by the Articulation of the Indigenous People of Brazil (APIB) which has reported a "series of attacks and invasions" of indigenous lands, as well as "persecution, racism and intolerance" shown toward native people since Bolsonaro took over the presidency the start of the year.

"There will be an increase in deforestation and violence against indigenous people," said APIB coordinator Dinaman Tuxa.

Bolsonaro has said he favors opening the Amazon to foreign exploitation, including by US companies. On Facebook, Bolsonaro said: "The richness that exists [in the Amazon], should be explored rationally for the wellbeing of our people and especially for the indigenous communities."

Within hours of taking office in January, Bolsonaro had issued an executive order to transfer the regulation and creation of new indigenous reserves to the Agriculture Ministry, which is controlled by the powerful agribusiness lobby.

He also transferred control of Brazil's FUNAI indigenous agency, which had previously been in charge of demarcation of reserves, to a new Ministry of Women, Family and Human Rights. It is presided over by a conservative evangelical pastor and the decision has led to concerns, including for the future of health care.

Health minister Luiz Henrique Mandetta wrote: "We have figures for the general public that are much below what is spent on health care for the indigenous,” he said, without providing details. In March, he proposed transferring health services to municipalities, which would be unable to provide services in indigenous languages. 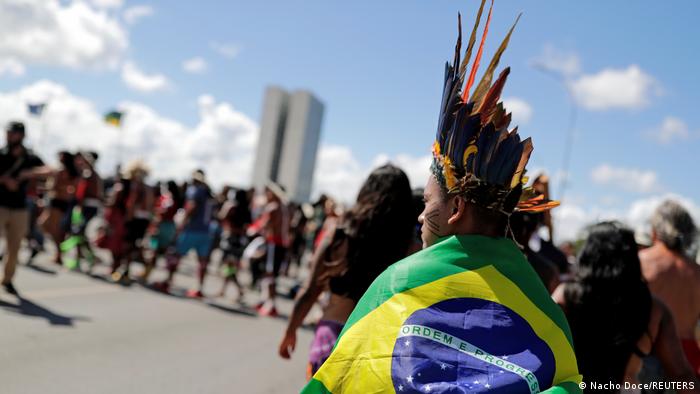 Indigenous reserves make up about 13% of Brazilian territory. Bolsonaro has accused Brazilian and international nongovernmental organizations (NGOs) of exploitation: "More than 15% of national territory is demarcated as indigenous land and quilombos," he wrote on Facebook, citing also the lands given to freed slaves. "Less than a million people live in these places, isolated from true Brazil, exploited and manipulated by NGOs. Together we will integrate these citizens," he wrote.

According to official figures, some 800,000 people belonging to 305 ethnic groups live in Brazil, a country of 209 million inhabitants.