Mohammad Javad Zarif has responded defiantly to the US targeting him for his role as Iran's chief diplomat. The sanctions raise questions about the Trump administration's stated willingness to talk with Tehran. 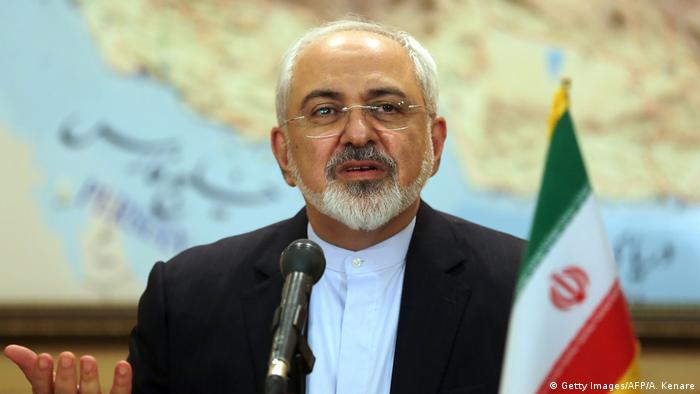 The United States on Wednesday put sanctions on Iran's foreign minister, in a highly unusual move that effectively closes diplomatic avenues amid already heightened tensions between the two countries.

The US Treasury said it was imposing sanctions on Mohammad Javad Zarif because he acted on behalf of the Islamic Republic's supreme leader, Ayatollah Ali Khamenei.

"Javad Zarif implements the reckless agenda of Iran's Supreme Leader, and is the regime's primary spokesperson around the world. The United States is sending a clear message to the Iranian regime that its recent behavior is completely unacceptable," Treasury Secretary Steven Mnuchin said in a statement.

The smooth-talking, US-educated diplomat has been Iran's chief interlocutor on the international stage and the main point person on the country's civilian nuclear industry, which the United States says is a covert weapons program. He is widely considered one of the most popular figures inside Iran.

The US Treasury said in a statement that Zarif spreads "the regime's propaganda and disinformation" through social media and that his ministry has coordinated with one of Iran's "most nefarious state entities," the Islamic Revolutionary Guard Corps' (IRGC) elite Quds force.

The US sanctions block any of Zarif's assets in the United States and prohibit US institutions from doing business with him. They also potentially subject any foreign institution that conducts a significant transaction with him to US sanctions.

It is unclear how the sanctions will impact Zarif's ability to visit the United Nations headquarters in New York as the US is bound by an international agreement, but he could see his movement restricted.

"The US' reason for designating me is that I am Iran's 'primary spokesperson around the world.' Is the truth really that painful? It has no effect on me or my family, as I have no property or interests outside of Iran. Thank you for considering me such a huge threat to your agenda," Zarif said via Twitter in response to the sanctions.

The European Union said on Thursday it regrets the decision to impose sanctions.

"From our side we will continue to work with Mr Zarif as Iran's most senior diplomat and in view of the importance of maintaining diplomatic channels," EU foreign policy spokesman Carlos Ruiz De Gordejuela said.

Iran said the decision to sanction its foreign minister was childish.

"They are afraid of our foreign minister's interviews,"  President Hassan Rouhani said in a televised speech, referring to recent interviews Zarif gave to foreign media in New York.

"It is completely clear that the foundations of the White House have been shaken by the words and logic of an informed, devoted and diplomatic individual.

"They are doing childish things now," Rouhani said on a visit to the northwestern city of Tabriz.

"Our enemies are so helpless that they have lost the ability to act and think wisely."

The sanctions against Zarif ratchet up Washington's "maximum pressure" campaign against Iran, which has dubbed President Donald Trump's withdrawal from the 2015 international nuclear accord and subsequent reimposition of crushing sanctions "economic terrorism."

In June, the Trump administration imposed additional sanctions on the supreme leader and in April it labelled the IRGC a terrorist organization, despite opposition from the Pentagon over worries the move would endanger US troops in the Middle East.

The Trump administration has said it withdrew from the 2015 international nuclear accord in order to get a "better deal" that addresses Iran's wider policy in the Middle East and its ballistic missile program. The administration has also said it is willing to talk with Iran.

But the US policy has driven a wedge between Washington and Europe, and hardened Iran's resolve to resist, raising the risk of a war across an already volatile region.

Analysts said that by sanctioning Zarif, the Trump administration essentially signaled a willingness to shut the door on diplomacy at a time of heightened tensions in the Persian Gulf following several tanker and drone incidents.

"This puts the Trump administration's Iran policy incoherence on full display. The administration can no longer pretend that it's primarily interested in diplomacy, when it sanctions Iran's diplomat in chief," Ali Vaez, the director of the Iran Project at the International Crisis Group, told DW.

The sanctions move is also "bound to backfire as it bolsters Zarif's domestic standing by neutralizing his critics," he added, referring to hard-liners in Iran opposed to reaching any accommodation with the United States.

Hossein Alizadeh, a former Iranian diplomat, told DW that the move was an act of desperation because the US has no leverage in talks with Iran.

"The sanctions against Zarif are an act against diplomatic etiquette and a serious threat to world peace and security," he said.

Iran is planning to remove four zeroes from its national currency, the rial, as the country struggles with soaring inflation. The oil-rich nation's economy has been hit hard by unilateral sanctions imposed by the US. (31.07.2019)

40 years ago, the revolutionaries led by Ayatollah Khomeini seized power in Iran. Anger against the Western-backed Shah regime helped Khomeini establish his hardline Islamic system, which still dominates the country. (11.02.2019)