President Donald Trump has said the US Navy shot down an Iranian drone after a ship took "defensive action." Earlier, Iran said it had seized a foreign oil tanker, accusing it of smuggling oil in the Persian Gulf. 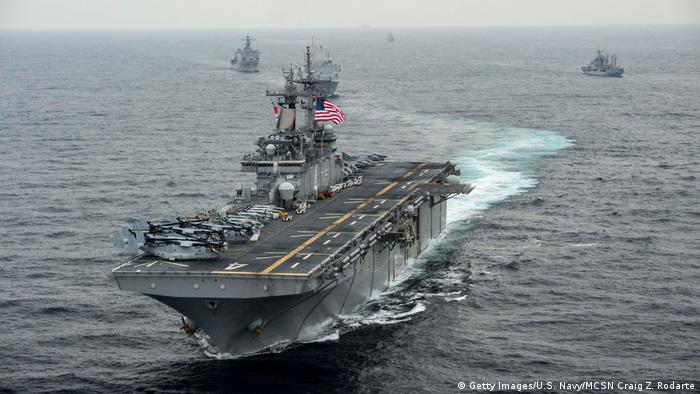 A US warship shot down an Iranian drone in the Strait of Hormuz after it reportedly came within 1,000 yards (914 meters) of the vessel, US President Donald Trump said Thursday.

Speaking at the White House, Trump said the USS Boxer "took defensive action" against an Iranian drone after it ignored multiple calls to stand down. "It was threatening the safety of the ship and its crew," said Trump.

In response, Iranian Foreign Minister Mohammad Javad Zarif said he was not aware of any downing of an Iranian drone in the strait on Thursday.

"We have no information about losing a drone today," he told reporters at the United Nations before a meeting with Secretary-General Antonio Guterres.

Iran's Deputy Foreign Minister Abbas Araghchi also denied Trump's assertion, hinting that the US could have downed its own drone "by mistake."

"We have not lost any drone in the Strait of Hormuz nor anywhere else. I am worried that USS Boxer has shot down their own UAS by mistake!" Araghchi tweeted.

The incident is the second spike in tensions in the Gulf region over the past 24 hours, after Iran said Thursday that its Revolutionary Guard had seized an oil tanker in the Persian Gulf and arrested 12 of its crew for "smuggling" Iranian oil.

On Thursday, Trump called on other countries to condemn Iran's attempts to "disrupt freedom of navigation and global commerce," and said other nations must defend their own vessels operating in the region and work with the US.

"This is the latest of many provocative and hostile actions by Iran against vessels operating in international waters," said Trump.

The US Defense Department said the incident happened at 10 a.m. local time (05:30 UTC) Thursday in international waters while the Boxer was passing through the strait to enter the Persian Gulf.

On June 20, Iranian Revolutionary Guard forces shot down a US drone after Tehran said it was flying over Iranian territory. The strike sparked international concern over the possibility of a larger conflict, with Trump ordering a retaliatory airstrike, only to call it off at the last minute.

Iran was also accused by the US of attacking two oil tankers, the Norwegian-owned Front Altair and the Japanese Kokuka Courageous in the Gulf of Oman in June.

Read more: Iran: No more 'deadlines' to save nuclear deal

The Strait of Hormuz in the Persian Gulf has become an area of heightened tension between the US and Iran, especially since the US sharpened sanctions last year as part of Washington's "maximum pressure" campaign against Tehran.

Almost a third of all global oil exports pass through the Strait of Hormuz, and in September 2018, Iranian President Hassan Rouhani threatened to block passage of ship traffic through its 21 nautical miles (39 kilometers).