For the US government, it is clear that Iran is responsible for the explosions on two oil tankers in the Gulf of Oman. As proof, a video and 13 photos have been published so far. What do they show? DW investigates. 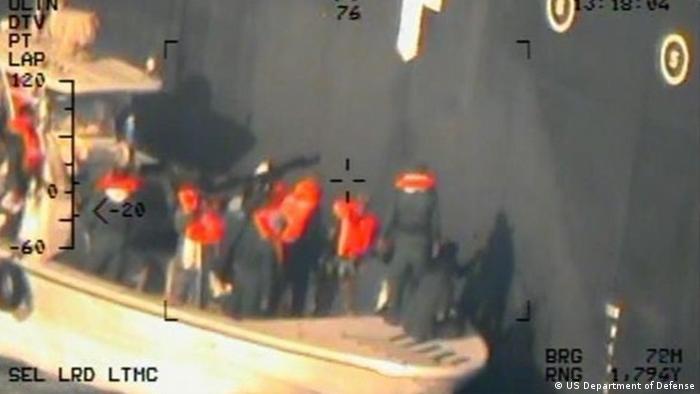 Just how serious the situation in the Gulf region is right now is shown by Iran shooting down a US drone. In the wake of that incident, the US apparently considered and then called off a retaliatory strike on short notice. The saber-rattling has been getting louder since June 13, when several explosions occurred on two oil tankers, Front Altair from Norway and Kokuka Courageous from Japan, just outside the Strait of Hormuz in the Gulf of Oman. That same day, the US government accused Iran of attacking the tankers with limpet mines. Iran denies the allegations.

Already on May 12, four ships near the Strait of Hormuz reported damage from explosions. Even then, the US and its Arab-world allies raised allegations against Iran. Around one-third of the world's oil transport goes by ship through the Strait.

Military experts emphasize that attaching and removing limpet mines on ships is risky and requires a great deal of expertise. The explosive devices are magnetically attached to ships - usually below the waterline by a swimmer or combat diver on the underside of a ship's hull. The blast that tore into the hulk of the Kokuka Courageous, according to US data, was a good meter above the waterline - suggesting that a limpet mine would have had to be attached by using a boat. American evidence against Iran focuses on this ship.

Conspicuous in this context is a different portrayal of the incident by the head of the Japanese shipping company that owns the tanker: Yutaka Katada told the press on June 14 that members of the crew had seen something fly towards the vessel just before the explosion.

This contradiction remains unexplained. Eliot Higgins of the investigative research network Bellingcat told Deutsche Welle: "There's clearly more information that could be shared, and by not doing so the US undermines their own case, and makes it look like they have something to hide."

In Germany, too, many political observers have not forgotten that the US justified the 2003 invasion of Iraq with counterfeit imagery — making an in-depth look at the evidence presented by the US all the more important.

On the evening of June 13, at 10:20 pm local time, US Central Command (CENTCOM) in Tampa, Florida, released a statement and a grainy black-and-white video on various channels including its own online page and that of the US Navy, as well as on YouTube.

The clip is one minute and 39 seconds long and, according to the US, shows the crew of a patrol boat of Iran's Revolutionary Guard alongside the Kokuka Courageous, tampering with the ship to remove an unexploded limpet mine.

At the beginning of the video some figures in life jackets are visible, one of which reaches up on the side of the tanker. But the recording is extremely blurred, shaky and cut together from several angles. The clip does not show a continuous action. When and how the video was created remains unclear. 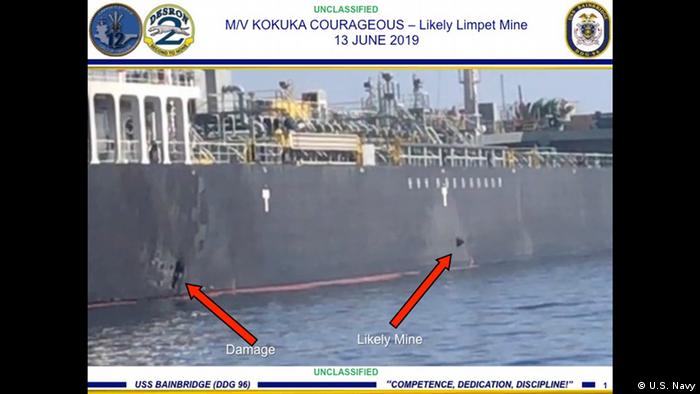 In addition to the video, CENTCOM published two edited photos showing the Kokuka Courageous in side profile from a distance. Two red arrows point prominently to a large hole in the vessel's side and a shadowy round or cylindrical object jutting out from the ship's middle.

According to the US, that shadowy object is the unexploded limpet mine whose removal the video allegedly shows. The two photos are provided with the source reference "USS Bainbridge (DDG 96)." That same US Navy destroyer is currently deployed in the region and on June 13 also took in the 21 crew members of the Kokuna Courageous, who had previously been rescued by the Dutch ship Coastal Ace.

It can be assumed that the mariners have been extensively questioned. But none of this has been publicized so far.

Analysis of the alleged evidence

Using ship-tracking tools such as the Marine traffic tracker, the tanker can be located and followed along its route through the Strait of Hormuz. The vessel was situated just off the coast of Iran at the time of the explosion. A detailed comparison with older photos of the tanker indicates that the Kokuka Courageous is indeed pictured in the footage.

Publicly accessible photos also suggest that the smaller ship alongside the oil tanker is very likely a Gashti-type speedboat, which Iran uses. The individuals aboard it, however, cannot be identified, nor is it possible to say with certainty what they are doing. The location and time of the footage cannot be verified.

Bellingcat investigator Higgins suspects a deliberate omission. "The one thing that stands out to me is we have all these images from the US showing the Iranians removing an object from the side of the vessel, supposedly the limpet mine, but not a single clear image of the object itself,” he told DW. "The video footage starts just as they're removing it, with the Iranians obscuring it, so why not show footage from seconds before when it's not obscured,” Higgins asks.

Publishing the video and photos, however, did not have the desired effect among Western partners. Since Washington's unilateral withdrawal from the Iran nuclear deal (JCPOA), European leaders have been trying to engage in dialogue with Tehran. Apart from the US, only the British government openly accuses Iran of attacking the two oil tankers.

On June 17, the US Department of Defense contacted the media directly. The Pentagon's new press kit includes 11 color photos and a Word document with detailed descriptions of the pictures. It also includes a timeline in PDF format, which reconstructs the events of June 13 in concise military language.

The later images provide much better quality than the video and show details in close-up. One of the photos, taken with a Canon EOS 80D, apparently shows "remnants" of the removed limpet mine: An object appearing to be a magnetic clamp. Also visible is a rounded wreath of indentations, suggesting that several more such magnetic clamps adhered to the side wall. But is it the side of the Kokuka Courageous? This cannot be verified beyond doubt by inspecting the photo. It also remains unclear why all the magnetic clamps would have been removed except for the lone clamp pictured. 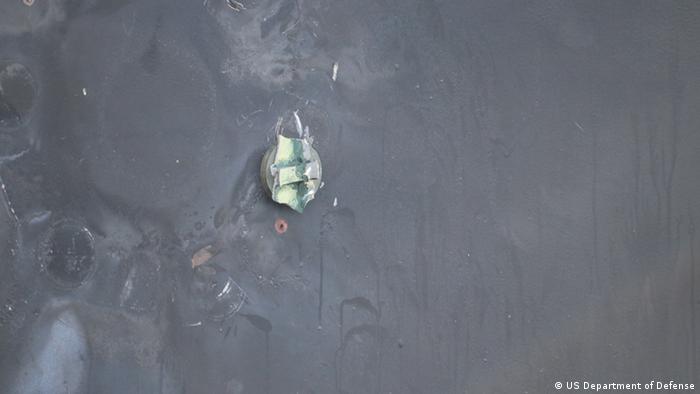 Could this greenish object be a magnet belonging to an Iranian limpet mine? The noticeable traces of other such objects around it raise further questions

Meanwhile, the US Navy has salvaged the remnants of the alleged limpet mine and presented it to the public on Wednesday, June 18 at a press conference held in the port of Fujairah, one of the United Arab Emirates. The parts have a "striking resemblance" to limpet mines, according to US Navy 5th Fleet Commander Sean Kido, who also said that the hole in the side wall is consistent with that of a mine explosion and not with the impact of a flying object.

Another very clear aerial photograph allegedly shows the Revolutionary Guard patrol boat after the removal of the limpet mine. Aboard are nine uniformed individuals; all but two are wearing orange life vests. A web search for Iranian Revolutionary Guard uniforms reveals similarly basic, olive-green garb. There is no doubt that the small vessel pictured is a Gashti patrol boat: Its superstructures, armaments and the peculiar chevron pattern on the bow tip are identical. But a reference point — like the damaged tanker — is not visible in this picture. 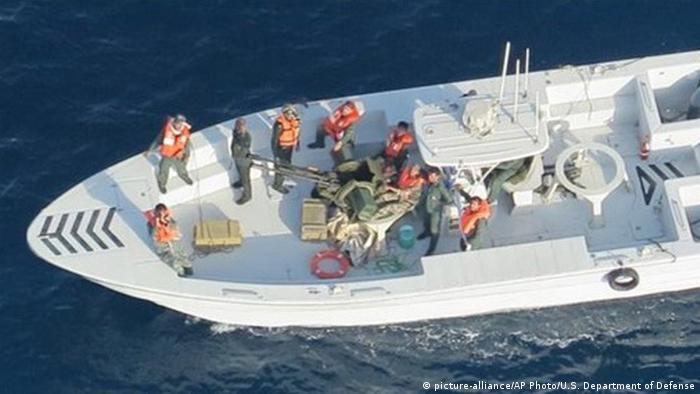 According to the Pentagon, five of the eleven images were taken from a US Navy MH-60R Seahawk helicopter. In three cases, the angle and cutout of the photos match the video — suggesting that it, too, was likely recorded from a helicopter.

Among the materiel of the USS Bainbridge (DDG 96) are helicopters like the Seahawk. From the timeline supplied with the Pentagon, it appears that on June 13, the destroyer constantly observed the vicinity around the Kokuka Courageous between 09:20 and 14:15 UTC. This hours-long surveillance suggests that there is much more footage than has been published so far.

With the video and the 13 photos in total, the USA presented a chain of indicators, to which German Chancellor Angela Merkel responded: "We take these claims of course very seriously, and there is also a high degree of evidence."

But none of the imagery presented by the US thus far shows a limpet mine. None shows Iranian soldiers attaching a limpet mine. There is still no clear and independently verifiable proof that the two tankers were actually attacked with limpet mines just outside the Strait of Hormuz on June 13 and that Iran is responsible. 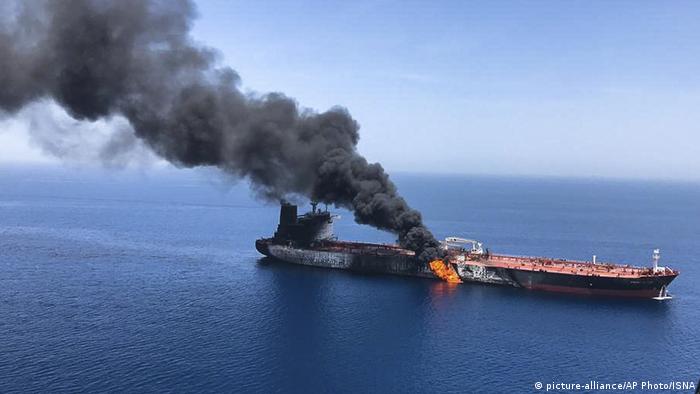 The Norwegian tanker Front Altair burning in the Gulf of Oman on June 13, 2019

At the time of the explosions in the early morning of June 13, the distance between the two tankers was ten nautical miles. The Norwegian tanker Front Altair first placed an emergency call, and a major fire broke out on board — but that incident appears to play no role at all in Washington's circumstantial evidence underpinning its claim of Iranian responsibility.

Several Iranian boats were proven to have been near the two tankers in the Gulf of Oman on June 13. One took on board the crew of the burning Front Altair, which had previously been rescued by the British cargo ship Hyundai Dubai. But Iran has so far mainly confined itself to verbal attacks and contributed nothing to clarifying the explosions. On Twitter, Iranian Foreign Minister Javad Zarif spoke of "sabotaging diplomacy" and accused the US of warmongering.

The result is one side's word against the other's. It is not possible to unambiguously and squarely place blame without independent scrutiny and clear evidence. As the threat of war lingers, much will depend on the crew members' testimonies.

A host of major carriers are rerouting flights away from the Strait of Hormuz after a US reconnaissance drone was shot down in the area. Airlines fear being mistakenly attacked. (21.06.2019)

Opinion: A Persian Gulf war can have no winners

After the attacks on two oil tankers in the Strait of Hormuz, the US is blaming Iran. How credible is the accusation, asks DW's Rainer Sollich, and could there be other powers at play? (15.06.2019)

Iran's seizure of a South Korean-flagged oil tanker comes after Tehran urged Seoul to release billions of dollars of Iranian assets frozen in South Korea under US sanctions.