President Trump had reportedly approved air strikes in retaliation for Tehran's downing of a US drone. A decision to stand down was allegedly made after Trump met with Congressional leaders. 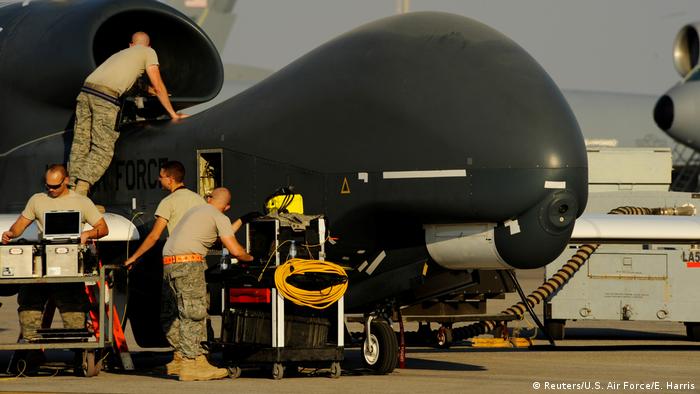 US President Donald Trump had approved targeted strikes on Iran and then backed out, several US media outlets reported on Friday. The Pentagon-recommended military operation was believed to be a response to the downing of a high-altitude US surveillance drone by Iran over the Strait of Hormuz.

Earlier in the day, Trump had chosen not to reveal how the US would respond to the downing of the drone, instead telling reporters "you'll find out."

US planes were reportedly in the air and ships were in position, but for unknown reasons, no missiles were fired. According to one official, the targets included radars and missile batteries.

"Regarding President Trump, I can say that there are numerous statements and indications that the US president would like to avoid a military confrontation and we naturally welcome that," said Fietz.

US aviation authorities banned American operators from flying in Iranian airspace over the Gulf of Oman, citing dangerous conditions. "There were numerous civil aviation aircraft operating in the area at the time of the intercept," the FAA said. Lufthansa, British Airways and other airlines also announced their intention to avoid the area.

Iran said on Friday that it had "indisputable" evidence that the US drone it shot down, worth about $130 million (€115 million), had violated Iranian airspace. "Even some parts of the drone's wreckage have been retrieved from Iran's territorial waters," said Deputy Foreign Minister Abbas Aragchi. A formal complaint was lodged at the UN Security Council, the Foreign Ministry added.

Tensions between the US and Iran reached new heights last week after explosions hit two tankers in the Gulf of Oman. The White House accused Iran of involvement, with US Secretary of State Mike Pompeo threatening all means necessary to protect its interests in the region.

"I don't see Iran backing down unless the US pulls back on its saber rattling," Holly Dagres, non-resident fellow at the Washington-based Atlantic Council, told DW. "The international community needs to step up and de-escalate the situation."

'No appetite for war'

Nasser Hadian, professor of international relations at Tehran University, told DW that the majority of Iranians want all sides to show "restraint in a hostile environment." But he warned that Iran was not likely to stand by and be cornered by the US.

"Why fly a drone so close to Iran?" he asked. "It may be justified in the minds of Americans, but not in the minds of people in this region. Why send such a provocation from thousands of miles away?"

In the US, House Speaker Nancy Pelosi publicly urged a "strategic, smart" response, in coordination with US allies. She added that the American people have "no appetite" for a war with Iran.

But Republican lawmakers signaled support for the president.

Senior Republican lawmaker Kevin McCarthy said that measured responses were required, adding that "President Trump and his national security team remain clear-eyed on the situation and what must be done in response to increased Iranian aggression."

The US Constitution grants Congress the power to authorize and declare war. But recent administrations have been able to carry out foreign interventions without congressional approval, through the Authorization for the Use of Military Force of 2001.

Critics of Trump's Iran policy worry that the law, which grants the president authority to use force against terrorists connected with the September 11 attacks, could be used to justify intervention and bypass Congress.

Read more:  The Strait of Hormuz: The world's most important oil choke point

Speaking on the 30th anniversary of the death of Grand Ayatollah Khomeini, Ayatollah Ali Khamenei has said "resistance has a cost, but the cost of surrendering to the enemy is higher." He also criticized Saudi Arabia. (04.06.2019)