The German foreign minister said all parties "must do everything to make sure it does not come to this." Iran has dismissed claims it attacked two tankers in the Strait of Hormuz, triggering a crisis in the waterway. 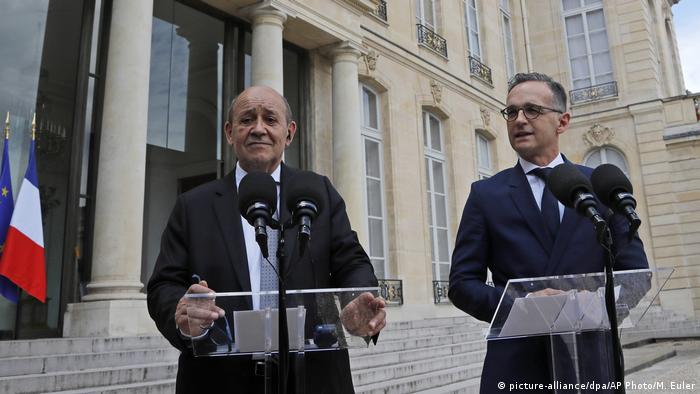 German Foreign Minister Heiko Maas on Wednesday warned that all-out conflict between the United States and Iran was still a possibility.

"The risk of war has not been averted," said Maas at a joint press conference with his French counterpart. "We must do everything to make sure it does not come to this, therefore, we are talking to all parties involved."

Last week, explosions occurred on two tankers in the Gulf of Oman in what US Secretary of State Mike Pompeo described as attacks. He said they formed part of a campaign of "escalating tensions" being carried out by Iranian elements and warned that the US would protect its interests in the region.

Iran has denied any involvement in the apparent attacks. In a bid to ease tensions, UN Secretary-General Antonio Guterres called for an independent investigation, saying actors should avoid "a major confrontation in the Gulf" at all costs.

German Chancellor Angela Merkel, however, sided with US allegations on Tuesday, saying there is "strong evidence" Iran was behind the attacks on two tankers.

"It is a very serious situation," Merkel said at a press conference with Ukrainian President Volodymyr Zelenskiy. "We take these acts very seriously."

The German government has repeatedly called for calm, saying all efforts should be exhausted to prevent open conflict.

Read more: The Strait of Hormuz: The world's most important oil choke point

"The accusation against Iran is totally a lie and I dismiss it firmly," Hatami said in comments carried by the semi-official Fars news agency.

He noted that Iran's armed forces "played a significant role in the establishment of security in the region," including sending rescue vessels when the explosions occurred.