Speaking on the 30th anniversary of the death of Grand Ayatollah Khomeini, Ayatollah Ali Khamenei has said "resistance has a cost, but the cost of surrendering to the enemy is higher." He also criticized Saudi Arabia. 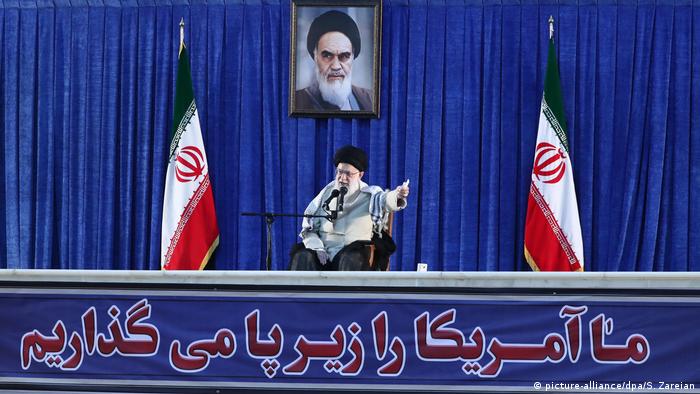 Supreme Leader Ayatollah Ali Khamenei denounced American pressure on Iran during a ceremony marking the 30th anniversary of the death of Grand Ayatollah Ruhollah Khomeini, founder of the Islamic Republic of Iran, on Tuesday.

In the speech at Khomeini's mausoleum, which was broadcast live on state TV, Khamenei said that "standing and resisting the enemy's excessive demands and bullying is the only way to stop him."

He told his audience, "Resistance has a cost, but the cost of surrendering to the enemy is higher."

'America is in political decline'

Without mentioning US President Donald Trump by name, Khamenei said, "The fate of more than 300 million humans is in the hands of a person with such characteristics, this is a sign of America's political decline."

Khamenei continued: "In America itself there is so much discussion about his mental and moral stability ... when such a person is the president of a country, this shows the political and moral decline of that country."

The supreme leader also warned Iranian politicians against negotiating with the US, saying, "Wherever Americans have set foot, war broke out, fratricide began, sedition was instigated, or an exploitation or colonialism began."

His warning comes just days after US Secretary of State Mike Pompeo suggested Washington would negotiate with Tehran "with no preconditions," but that Iran must return to the Joint Comprehensive Plan of Action (JCPOA) first.

Rouhani: 'We announced a reduction, not withdrawal'

The Trump administration unilaterally withdrew the US from the 2015 international treaty in May 2018 and re-imposed sanctions on the Islamic republic. Iran maintains that it has upheld its end of the nuclear deal and only withdrew from portions of it after the US left.

Tensions between Washington and Tehran have increased of late with the US placing new sanctions on Iran's oil sector as well as deploying an aircraft carrier squadron, cruise missiles, and B-52 bombers to the region citing unspecified threats from Iran.

Khamenei says the US is pressuring his country because it has developed its missile program to the point where it has become a true deterrent. Speaking of the US, he said, "they want us to be losers and put up our hands as a sign of surrender, and because we don't do that, they threaten us."

But the US was not the only adversary Khamenei singled out in the speech. He also criticized Saudi Arabia for siding with the US. Regional rivals, the Saudis have actively sought an ever-closer alliance with the US in isolating Iran.

Recently, Saudi Foreign Minister Ibrahim al-Assaf called on Muslim nations to band together against Iran with "all means of force and firmness."

Iran and Saudi Arabia have been at odds for years, and their rivalry has been highlighted in the ongoing conflicts in Syria and Yemen, where they back opposing sides.

The Saudis, who broke off diplomatic ties with Iran in 2016 in the wake of an attack on its Tehran embassy following the execution of Shia opposition cleric Nimr al-Nimr by Riyadh, accuse Iran of threatening regional stability and security.