Saudi Arabia's King Salman has warned that Iran's aggression is a "grave danger" to the security of maritime traffic. Iran said it regretted the king's "abuse" of his country's "privilege." 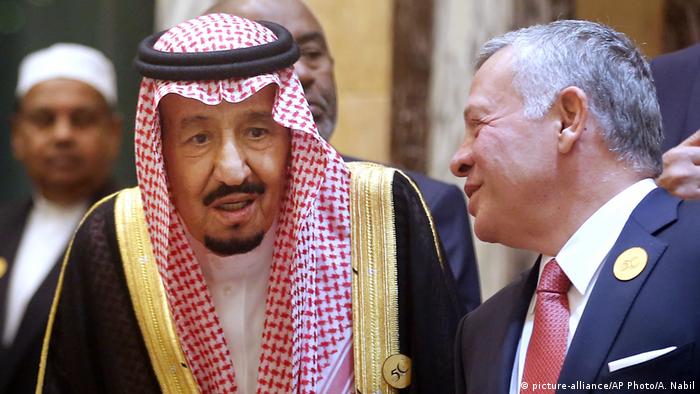 "These subversive terrorist acts are aimed not only at the kingdom and the Gulf region, but also on the security of navigation and energy supplies to the world," he told Muslim leaders gathered in the holy city of Mecca for a meeting of the 57-member Organization of Islamic Cooperation (OIC).

It was the third international summit to be held in Saudi Arabia this week and drew political figures and heads of state from countries in Africa, the Middle East and Asia, but it was marked by the absence of Iranian leaders and Turkish President Recep Tayyip Erdogan.

Salman opened the summit, which began after midnight Friday and ran into the early hours of Saturday due to evening prayers and daylong fasting during the holy month of Ramadan.

In his address, the king urged Muslim leaders to fight the sources and funding of terrorism around the world.

The Saudi king told those present that Iran was responsible for the alleged attack on four oil tankers off the coast of the United Arab Emirates in May. He warned that such actions represented a "grave danger" to the security of maritime traffic and the region.

Salman also accused Iranian-backed terrorist militias of being behind a subsequent drone attack on a Saudi oil pipeline.

The monarch's comments follow US national security adviser John Bolton's visit to the UAE on Wednesday, where he said that Iranian naval mines were "almost certainly" responsible for the attack on the four ships.

Saudi Arabia's effort to bring leaders to Mecca is indicative of the kingdom's desire to form a unified Muslim and Arab front that can help isolate archrival Iran on the international level.

Iranian Foreign Ministry spokesman Abbas Mousavi criticized the kingdom's position, saying that Tehran regretted "Saudi Arabia's abuse of its privilege as the host" of the OIC "to sow division between Islamic and regional countries."

But in its final statement, the OIC followed Riyadh's cue and condemned a "terrorist attack" on Saudi Arabia's oil pumping stations.

The group also denounced what it called "sabotage operations" against four vessels off the coast of the UAE, saying that they threatened international maritime traffic safety, the statement read.

Iranian protesters have burned effigies of Donald Trump and trampled Israeli flags as part of annual rallies marking Quds Day. The marches come as the US prepares to unveil a long-awaited plan for the Middle East. (31.05.2019)

The US would "certainly negotiate" with Iran if Tehran made a move, US President Donald Trump said after downplaying the Iran threat. Separately, Iran's President Hassan Rouhani said the time was not right for talks. (21.05.2019)

US may deploy thousands more troops amid Iran tension

The Pentagon is considering a request to send thousands more troops to the Middle East as relations worsen, unnamed officials say. Meanwhile, Iran's supreme leader said he foresaw the demise of American civilization. (23.05.2019)

German Chancellor Olaf Scholz has arrived in Saudi Arabia at the start of a two-day tour of the Gulf region. Germany is seeking new energy partnerships after the loss of Russian oil and gas supplies.