More than half of Americans believe the US will go to war with Iran "within the next few years," according to a new Reuters/Ipsos opinion poll. Fewer than 40% approve of President Donald Trump's handling of the crisis. 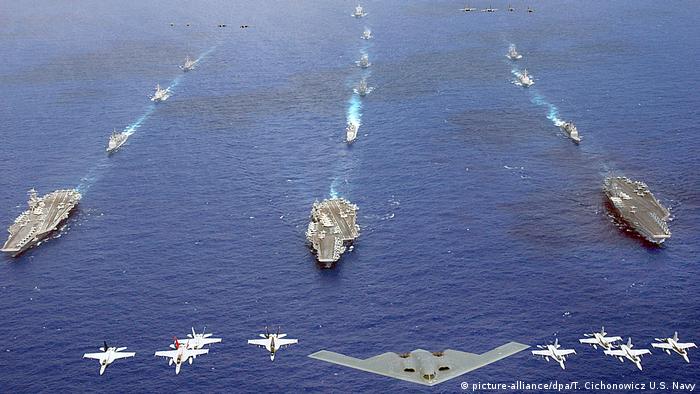 US President Donald Trump's administration has ratcheted up its "maximum pressure" campaign against Iran in recent months, raising concerns that the United States and Iran are on a path to war.

According to a Reuters/Ipsos poll published Tuesday, 64% percent of Americans — including a large majority of Republicans — support the 2015 deal designed to prevent Iran from acquiring nuclear weapons in exchange for sanctions relief.

Amid the brewing tensions, 51% of respondents indicated that the United States and Iran would go to war within the next few years, up 8 percentage points from a poll last June.

Read more: Trump willing to negotiate when Iran is 'ready' for talks


Nearly half — 49% — of all Americans disapprove of how Trump is handling relations with Iran, the poll found, with 31% saying they strongly disapprove. Overall, 39% approve of Trump's policy.

At the same time, 54% of Americans view Iran as a "serious" or "imminent" threat.

US building up its military presence

In April, hardliners in the Trump administration pushed to label Iran's Islamic Revolutionary Guard Corps a terrorist organization, despite warnings that the move could endanger US personnel in the Middle East. A month later the US restored all sanctions on Iranian oil exports.

Trump's national security adviser John Bolton in May made a show of an already scheduled US aircraft carrier group's deployment to the Persian Gulf and announced a B-52 bomber force would be sent to the region. Days later, the Pentagon added a Patriot missile defense battery and an amphibious assault ship to the deployment.

Iran has allegedly sabotaged oil tankers off the coast of the United Arab Emirates and Yemen's Iranian-aligned Houthi rebels have carried out drone attacks on Saudi oil pumping stations amid US intelligence warnings that Iran or Iran-backed groups could threaten US interests.

Analysts say that provocative US moves could be perceived by Iran as a potential imminent military threat at a time when the US has already engaged in economic warfare.
Concern is growing that an incident — whether intentional, accidental or staged — could trigger an uncontrollable escalation into a devastating regional war.

If Iran attacked US military forces first, 79% of poll respondents said that the US military should retaliate: 40% preferred airstrikes on Iranian military targets, while 39% favored a full invasion.