Critics say that Iran's Islamic Revolutionary Guards Corps has been involved in terror-related activities and rights abuses. They are however divided whether its designation as a "terrorist group" is the right decision. 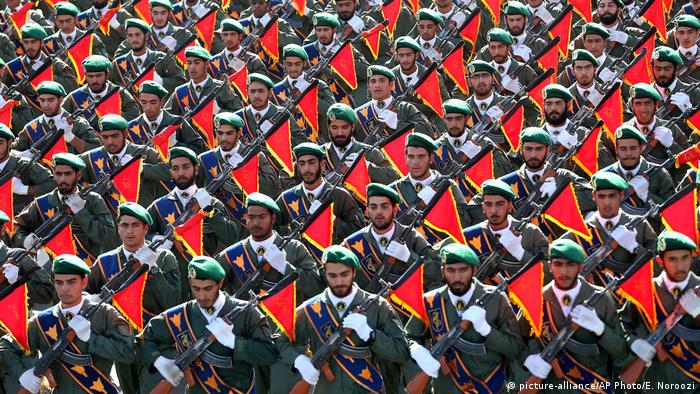 In an extraordinary move, on Monday the United States put the elite Islamic Revolutionary Guard Corps (IRGC) on its list of foreign terrorist groups. It is the first time that the US has designated an agency of another government a "terrorist organization." But, keeping in mind the ongoing hostility between the countries, the designation was not unexpected.

"This unprecedented step, led by the Department of State, recognizes that Iran is not only a State Sponsor of Terrorism, but that the IRGC actively participates in, finances and promotes terrorism as a tool of statecraft," a statement from US President Donald Trump's press secretary read.

According to Trump's office, the designation "sends a clear message" to Iran's government that its actions have consequences.

The designation means that the United States would impose direct sanctions on the IRGC.

In response, Iran's government declared the US Central Command and the US military in West Asia "terrorist" organizations and labeled the United States a "state sponsor of terrorism."

Hossein Aryan, a senior military affairs analyst, told DW that the retaliation has no practical significance.

"It is just propaganda for domestic consumption," said Aryan, who served as a naval officer in Iran for 18 years. "However, the IRGC can use its 'surrogates' to exploit US vulnerabilities in Iraq and Syria. It has close ties with Lebanon's powerful Hezbollah group, and it can use it to cause trouble for American forces in eastern Syria."

The IRGC is Iran's elite military force responsible for protecting the regime from internal and external threats. The 150,000-man force also controls the Basij militia, which has about 90,000 active members, and runs the foreign special operations Quds force.

The corps was established at the end of Iran's 1979 Islamic Revolution as an elite armed militia whose role was to protect the then-embryonic Shiite clerical regime. It also formed an important counterweight to Iran's conventional military, many of whose leaders were believed to be loyal to the exiled shah.

The unit initially operated as a domestic force, but expanded quickly after Iraqi dictator Saddam Hussein invaded Iran in 1980, when Ayatollah Ruhollah Khomeini gave the group its own ground, naval and air forces.

An 'armed instrument for the regime's abuses'

"The IRGC, as its name indicates, was created as a tool to promote jihad all over the world," Paulo Casaca, the founder and executive director of the Brussels-based South Asia Democratic Forum, told DW, adding that he feels the designation was justified. "It has been involved in the promotion of terrorism for a long time."

"It is important to note that the European Union has already listed the most important IRGC leaders as 'terrorist entities,'" Casaca said. "Hence, there is no contradiction between the US measures and the ones taken by the EU some months ago."

"There is a difference in method though," said Casaca, who was a member of the European Parliament for Portugal from 1999 to 2009. "Whereas the EU thinks it is better to keep the designation for only some individuals — this is also the case with Lebanon's Hezbollah, which the EU only partially listed as a terrorist organization — the US has now put the entire organization on its terrorist list

The corps has reportedly suppressed dissidents within Iran and been involved in torture and massive human rights abuses.

"The IRGC is the main armed instrument for the regime's abuses," Casaca said. "It has huge economic clout in the country: It is part of Iran's formal and informal economy and acts as a public-investment and social-intervention body."

Casaca said he believed that the IRGC was involved in "spreading jihad abroad."

"It directs finances and arms to militias in Iraq, Syria, Lebanon, Yemen, Afghanistan and Pakistan," Casaca said. "Through its internal militia, the Basij, it is the regime's tool for internal repression. Most of the times, it is called into action whenever popular protests become stronger in the country."

Supporters of Iran's government view the IRGC as a "protector" and "guardian" of the revolution.

The IRGC has also been involved in public services and relief activities, such as by helping out the victims of the ongoing massive floods. The head of IRGC recently said the armed forces "were using all their power" to respond to the flood damage. Some Iranians believe that the IRGC has used the floods to increase its domestic support.

On Tuesday, Iranian lawmakers dressed in paramilitary uniforms and chanted "Death to America" in parliament. President Hassan Rouhani said the force's popularity would only surge in the wake of the designation, adding that the IRGC would be more supported by Iranians "than any other time."

That sentiment was apparent on social media. "According to the Article 150 of the Iranian Constitution, the IRGC is a part of the armed forces," Reza Ramezannejad G wrote on Twitter Monday, using the hashtag #WeSupportIRGC. "Calling them 'terrorist' is an insult to the constitution of the country and the people of Iran."

Some support the US's decision. "I was arrested by the IRGC and tortured for three months," someone named Madyar wronte on Twitter Monday. "I still suffer from it even after 15 years. I was imprisoned for nearly two years. The Revolutionary Guards Corps is a 'rebellious' military force that violates human rights and is the enemy of the Iran. The corps are "alone." Let me be clear: there is no reason to support an institution that violates human rights, which is oppressive and which plunders our economy."

Reza Alijani, a Paris-based Iranian journalist and member of the Council of Nationalist-Religious Activists of Iran,told DW he believed that the decision would make reconciliation and negotiation between the US and Iran even more difficult.

"The policies of Iran's rulers and the Trump administration have put Iranians between two poles," Alijani said. "The IRGC issue should be solved by the Iranian people themselves. Now, how the Iranians are going to react to the US decision is hard to predict."