Rights group Human Rights Watch has accused Iran of recruiting Afghan immigrant children to fight in Syria. Under international law, recruitment of children under age 15 is a war crime. 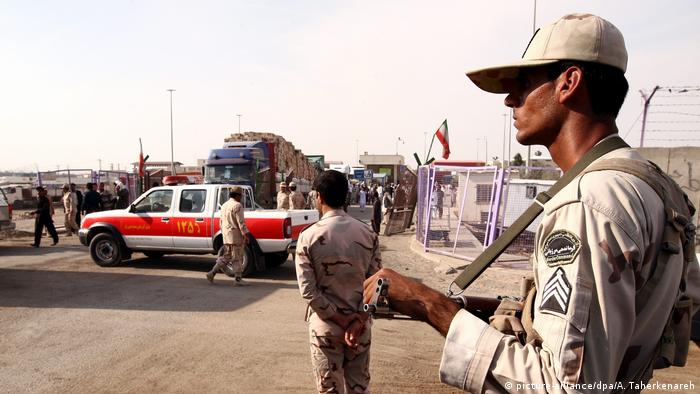 International, non-governmental organization Human Rights Watch (HRW) issued a report on Sunday saying Afghan children as young as 14 have fought in the Fatemiyoun division of Iran's Islamic Revolutionary Guards Corps (IRGC). The division is made up of Afghan volunteers supported by Iran, fighting with government forces in Syria.

The HRW research was based on photographs of tombstones in Iranian cemeteries where combatants killed in Syria had been buried. One of the eight graves showed a 14-year-old buried in the martyr's section of Tehran's Behesht-e-Zahra cemetery.

Iranian media reported confirmation of some of the cases and cited six others of Afghan child soldiers who had died in Syria.

The HRW Middle East director Sarah Leah Whitson said, "Iran should immediately end the recruitment of child soldiers and bring back any Afghan children it has sent to fight in Syria."

There are an estimated 2.5 million Afghans living in Iran, according to Iran's interior ministry. Many do not have residency documents.

According to media reports, the Fatemiyoun division may number 14,000 fighters who have been trained and supported by Iran. Set up in 2013, there are no official statistics on the group.

One 29-year-old Afghan identified by HRW as "Ali" told the researchers in August that he joined the Fatemiyoun division after a recruiter told him he could renew his Iranian residency permit more easily if he joined up.

"They never asked me to show any documentation, but they wanted to make sure we were Afghan nationals,” Ali told Human Rights Watch. "We had to be above age 18 to be recruited, but they only asked for our age, not any documentation."

Sepehri Far, a HRW researcher in the Middle East, said: "It does not appear to be a deliberate policy to recruit children." She suggested, "It's more of a sloppiness that the authorities and recruiters don't care enough to ask for proof of age."

The rights of Afghan children

Iran says offically that all Afghans living in Iran who join the Fatemiyoun division are volunteers. In 2015, Iran allowed all Afghan children to register for school after Supreme Leader Ali Khamenei stated: "No Afghan child, even the undocumented ones, should be left out of school."

According to international law, military recruits must be at least 18 and the training or deployment of soldiers younger than 15 is considered to be a war crime. Under the Rome Statute of the International Criminal Court, "conscripting or enlisting children under the age of 15 years into national armed forces or using them to participate actively in hostilities" is a war crime.

In light of the evidence in its report, HRW has called on the United Nations to investigate child recruitment in Iran and to consider adding the IRGC to the list of those carrying out violations against children.

Tehran has suggested "global arrogance" could have been behind the killing of Colonel Hassan Sayyad Khodaei, described as a "great martyr." Khodaei is believed to have been involved in operations in Syria and Iraq.