Secretary of State Mike Pompeo has said the US is not seeking conflict in Iran, after high-level talks in Russia. Meeting with President Vladimir Putin and top officials, he also discussed ways to mend US-Russia ties. 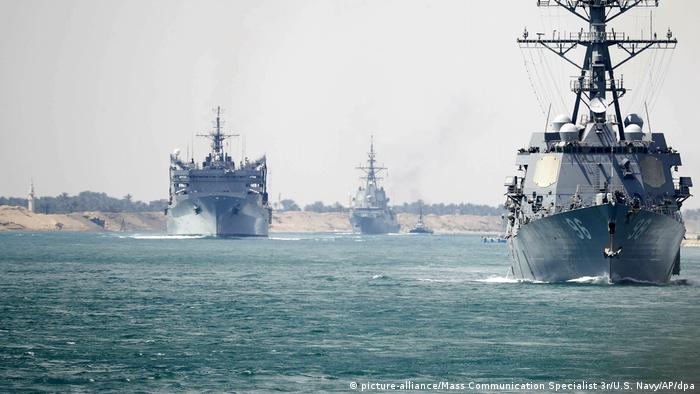 Meeting with top Russian officials on Tuesday, US Secretary of State Mike Pompeo tried to ease concerns over rising tensions between Washington and Tehran that some fear could lead to conflict.

"We fundamentally don't seek war with Iran," Pompeo said after closed-door talks with Russian President Vladimir Putin and Foreign Minister Sergey Lavrov. "But we've also made clear to the Iranians that if American interests are attacked, we will most certainly respond in an appropriate fashion."

To counter any possible attack, the United States has sent an aircraft carrier and B-52 bombers to the Middle East, heightening already high levels of unease that resulted from the US reimposing sanctions on Tehran following President Donald Trump's withdrawal of the US from the 2015 Iran nuclear deal last year.

"Europe has a stake in a very peaceful and stable Middle East," said US Iran envoy Brian Hook, speaking with DW in Brussels. "Iran has been threatening to conduct attacks, so we have put in place defensive measures.

"The problem we have now is that it's hard to imagine a peaceful Middle East without a peaceful Iran. So we are asking Iran to behave more like a normal nation and less like a revolutionary cause."

Russia and the US both said they wanted to strengthen ties between their two countries, but admitted there were clashes on a number of issues.

Pompeo said Russia and the US had "truly overlapping interests" that the two countries "can build on, and most importantly, President Trump very much wants to do that."

"We, from our side, have repeatedly said that we would like to fully restore relations," Putin said according to excerpts released by Russian state news agency TASS. "I hope that now the necessary conditions will be created to that effect."

Meanwhile, at a press conference with Pompeo, Lavrov warned that "this mistrust that we [Russia and the US] have hinders both your security and ours."

The meeting between Putin and Pompeo was the highest-level face-to-face contact between the two countries since special counsel Robert Mueller's report was released last month.

Putin did not address Mueller's conclusion that Russia had actively interfered in the 2016 presidential election.

"However exotic the work of special counsel Mueller was, I have to say that on the whole he has had a very objective investigation and he confirmed that there were no traces whatsoever of collusion between Russia and the incumbent administration, which we said was absolutely fake," Putin said as he opened the meeting with Pompeo in the Black Sea resort of Sochi.

Read more: The US president's executive privilege: What you need to know

"As we said before there was no collusion from our government officials and it could not be there. Still, that was one of the reasons for the certain break in our inter-state ties," Putin said. "I'm hoping today that the situation is changing."

Pompeo did not reference election meddling in his response to Putin, but he did say the Trump administration would "protect our nation's interest."

During the news conference with Lavrov, Pompeo said if Russia was to interfere in US elections in 2020, "it would put our relationship in an even worse place than it is." Lavrov rejected the allegations.

One major point of contention during a press conference saw Pompeo urge Russia to end its support for Venezuelan leader Nicolas Maduro, adding: "We want Venezuela to get their democracy back."

Maduro has "brought nothing but misery to the Venezuelan people," Pompeo told reporters while sitting alongside Lavrov. "We hope that Russia's support for Maduro will end."

Lavrov hit back by saying that "threats by the US administration" against Venezuela's leadership have "nothing to do with democracy."

US: Russia convinced Maduro to stay in Venezuela

US Secretary of State Mike Pompeo has said Maduro was ready to go into exile in Cuba but was persuaded by Russia to stay. President Donald Trump has called on Cuba to immediately cease its military support for Venezuela. (30.04.2019)