On Monday, fresh US sanctions against Iran come into effect, the next salvo in its economic conflict with Tehran. The main targets are oil exports and the financial sector. Europe is having difficulty forming a response. 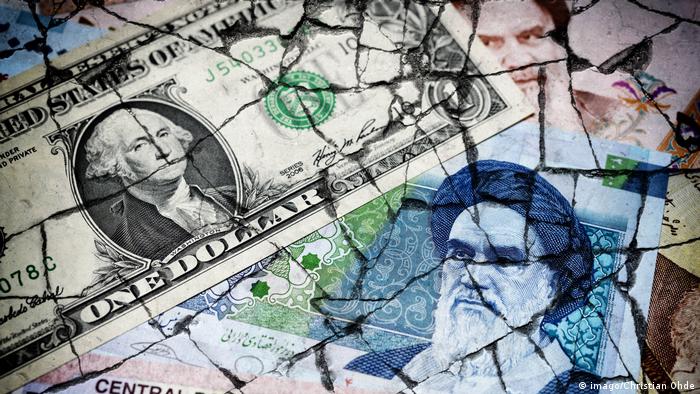 Which sanctions are going into effect?

US punitive sanctions are aimed at Iran's economic heart: energy exports. All business with Iranian oil companies will be prohibited, as will insurance of any kind, including policies covering oil shipments. Existing sanctions on Iran's financial sector will also be tightened; from Monday onward, all financial transactions with Iran's central bank and a number of other banks will be banned.

The US is intent on bringing Iranian oil exports to zero. Oil sales account for some 80 percent of all state income in Iran, and since 60 percent of Iran's budget expenditures are distributed to state-run businesses and institutions, the country is extremely dependent upon the revenue they produce.

What sanctions had been in place already?

When it unilaterally withdrew from the Joint Comprehensive Plan of Action (JCPOA) — also known as the Iran nuclear deal — on May 8, the US gave its partners two deadlines to wind down business with Iran. The first 60-day deadline came on August 6. At that point Iran was barred from trading in US dollars.

Key Iranian industries such as the automotive sector and carpet production were also sanctioned. The sale of commercial airliners or replacement parts for existing models — access to which had already been greatly hampered — were forbidden entirely. The second deadline was set for November 5.

What is the aim of the sanctions?

According to the Trump administration, "maximum pressure" on Iran is a tool to force Iranian leaders to change course. On May 21, Secretary of State Mike Pompeo presented a list of 12 demands that the US said must be met before sanctions would be lifted. Among other things, Tehran had to stop its missile program, and "end support to Middle East terrorist groups, including Hezbollah, Hamas and the Palestinian Islamic Jihad."

Furthermore, Pompeo said Iran must remove all troops under its command from Syria and demobilize Shiite militias in Iraq. Regime change is not among the declared aims of US sanctions. Nevertheless, public statements by National Security Adviser John Bolton suggest that destabilization and regime change would be more than welcome from Washington's perspective.

Can the EU defend itself against unilateral US sanctions?

The US is using its predominance in global financial markets and its comparative attractiveness as a place to do business as opposed to Iran as leverage in pursuing its political aims. As a result, measures that essentially allow Washington to regulate European and other international businesses have been correspondingly harsh. In late September, the EU's chief diplomat, Federica Mogherini, announced that the EU was developing a mechanism known as a Special Purpose Vehicle (SPV) to facilitate business transactions with Iran. The SPV would operate like an exchange, allowing European and Iranian businesses to settle accounts with one another at an EU clearing house. Oil deliveries, for example, could be paid for with textile production machinery. The setup would make the flow of cash across international financial markets disappear.

That said, the SPV is far from operational and no one knows where the institution will actually be based. While announcements of new EU institutions generally draw a great amount of attention from those eager to host their headquarters, this has not been the case with the SPV. European member states have been loath to volunteer for fear of drawing Washington's ire. Bolton threatened that the USA would not "allow our sanctions to be evaded by Europe or anybody else."

What effect have sanctions had so far?

Iran's currency, the rial, is in free fall, having lost 70 percent of its value this year and inflation is skyrocketing. Iranian energy exports have dropped by almost a third since June. Rising energy costs — which are painfully felt at the country's gas stations — are also tied to shortages brought on by sanctions. After a short honeymoon of cooperation and international investment in Iran, many international companies have headed for the exit since May. Among those who left were many European businesses fearful of being locked out of the far more lucrative American market should they stay.

Imports to Iran have been greatly hampered across the board. Life-saving drugs, for instance, have become hard to find and are extremely expensive. Still, Iran has years of experience in dealing with US sanctions and has announced its shift to a "resistance economy." From a political standpoint, Washington's sanctions only bolster Iran's ultraconservative forces, who have always been critical of any form of rapprochement with the West.

Moreover, Washington's one-sided withdrawal from the JCPOA nuclear agreement and the implementation of unilateral sanctions have deepened the trans-Atlantic divide. Now, Europe is standing side by side with Beijing and Moscow and against Washington in one of the central international questions of our day.